I Know That Smell Redux 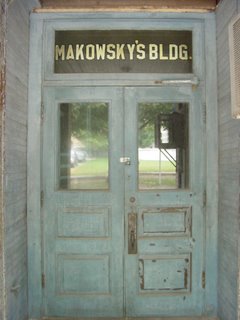 [Editor's Note: First offered in 2006]
[Author's Note: Man, I was smart in 2006. Of course, like Cassandra, knowing what's going to happen and doing anything about it are two different things. And there is no editor.]

We walked past this doorway in Bristol, Rhode Island. It's the entrance to a vacant turn-of-the-twentieth century single-story retail business building. My wife commented on what a neat place it would be to sell my furniture. I've done that sort of mental arithmetic a million times, for myself and others, and I know anyplace cheap enough for me to buy is generally cheap for a reason. If it was easy, someone would have done it already.

That little padlock you see is to "keep the honest people out," as we used to say. It's probably there to protect the valuables of the people working on the building, not the building itself. Some sort of demolition had happened, and the woolly interior of the walls and ceilings was partially exposed, but there was no sign of anything but the most desultory activity. No Coming Soon sign. No building materials. No people.

Now, I told you I know that smell. I've worked on buildings and/or their furnishings for my whole life. And I've seen most everything at this point. I've seen wooden plumbing and DC electricity and steam piped in by the city for heat. I've seen vestigal carbide gas works and elevators with accordion doors,and secret rooms. I've seen ranks of identical rooms -- whole closed up floors of them-- one bed, one window, one dresser each, for the long dead live-in servants of the ghosts of the mansion's long dead original owners. I've seen the cubbyholes where settlers hid their children during King Philip's War. I've repaired houses sheathed with 24" wide oak planks 1-1/4" thick and as hard as a banker's heart. I've seen more lead paint than a Dutch Boy.

That smell used to be common thirty years ago. It was a building that had gone to seed, but with hard use, over a long time, and barely altered. It wasn't continuously fiddled with, with only a vestige of its original form showing through the years. It was old, and a wreck, and wonderful, and had potential -- and nobody wanted it.

Everybody wants everything now. I caution persons slightly younger than me that life was not always as rosy as it has been for the last 20 or 25 years, at least for the most part. There was a time when it was very difficult for a hardworking family to get by, and you jumped on any work situation that promised even a modicum of stability. With both feet. You'd accept work situations that would look like indentured servitude now, more or less. You never ever ever quit your job before you had another one. Never. And it took real nerve to buy a rundown building like this and turn it into something.

My elders warned me about the Depression. It led them to certain habits which seem like madness now -- overreaction and paranoia. When you hear about honest people hoarding cash outside of banks, saving newspaper and cardboard and scraps of this and that, never throwing anything away, always afraid that all prosperity is ephemeral -- that's the Depression talking.

Twice in my working life, unemployment in the construction business has exceeded 25% for a substantial stretch. That might be news to you civilians, but the reason you can't find anyone to do anything for you that involves heavy lifting, hammers, and speaking english, is that everyone but the hardiest souls and people with nothing but a strong back were driven out of the sector for sunnier economic climes. Everybody bailed out if they could manage it.

Well, I'm not going to warn you about the Depression. Preparing yourself for a cataclysm that never comes is a form of unpreparedness, really. But recently, I hear that certain ex-government officials have gotten the idea in their heads that 1970 was swell, and had just the right ratio of carbon dioxide and economic activity, and we need to return there, pronto.

I know that smell. It's the smell of the cake I'm going to be allowed to eat, when there is no bread. 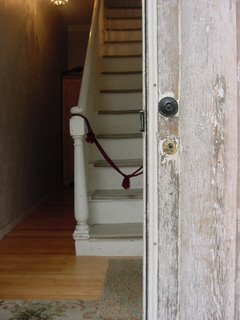 Posted by SippicanCottage at 10:18 AM 9 comments: