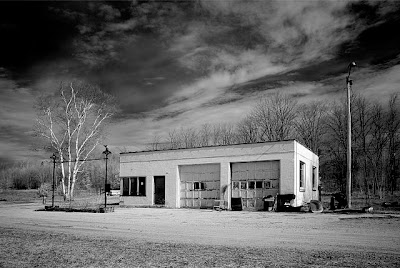 In a previous life, I supervised the construction of commercial buildings -- filling stations, convenience stores, restaurants -- that sort of thing.

After a short while, I was in charge of most everyone. When you're in charge, all the ticklish things make it to your desk. The staff tries on their own for a while, and then it escalates to supervised trying, and finally at the end of the winnowing process, there's nothing left but really tough things that only a person with the keys to the kingdom can handle.

The worst stuff was what employees would hide for years at a time. Carrying uncollectable debt on Accounts Receivable forever, never quite completing a project until a place needs to be remodeled before it's officially finished, stuff like that. A couple of times project managers went into the hospital for short periods and a casual look over what was hidden under their desk blotter gave me an aneurysm. The passing of an employee out of the building was like the old business saying about the tide going out: It affects everyone the same amount, but you get to see who isn't wearing any swim trunks. It was at the tail end of one of those cathartic employee convulsions that I gazed upon the second most beautiful woman in the world. You don't forget people like that.

There was a convenience store/ gas station combo that had been built before I was even employed by the company, but was never really finished to the last jot and tittle, and there was some money left on the table and I had to go get it. The building was in the inner city of Boston. I arrived in the late afternoon after a long drive. The place looked as neat as a pin, like it was ten minutes old. I got out to look around a bit, then went inside.

The building was built in what we termed "the urban style." What was meant by that was that it had to be constructed to withstand a zombie apocalypse, a full-on riot, a nuclear strike, and World War III at the same time. The building was constructed of textured concrete block. The block was ribbed to make it harder to deface. A concrete block might seem substantial to a layman but it's hollow inside and won't stop a high-caliber round. While laying up the blocks, each cavity in the wall was specified to be filled completely with mortar instead of the insulation a regular wall might be filled with. Reinforcing steel bars were put vertically through the webs before the mortar, because it was common for hijacked cars and trucks to be rammed through the sides of such buildings for smash-and grabs. In addition to the wall reinforcement, bollards were set deeply into the ground in front of any part of the facade with any sort of penetration in it. The bollards were steel pipe that were filled with concrete.

The roof was flat with a short parapet wall, as is common with such structures. HVAC (Heating,Ventilation, and Air-Conditioning) and other mechanical contrivances were installed on the roof. In the "urban" environment, every opening that was required in the roof , some large, some very small, had to have a steel grate welded over it before the units were installed on them, to protect from entry to the building after removal of the machinery from their bases.

The front of the building had a lot of glass, centered in the facade. It was all bullet-proof glass, and not ordinary bullet proof glass, but a form of it the suppliers often referred to informally as "military." That was just to protect the building during the day when it was open; there was an enormous sort-of steel garage door that was lowered over the glass part of the facade after the business closed for the night.  The building became a short, squat metal and masonry bunker that showed no opening whatsoever. At one time, these sorts of buildings has a four-inch square window in the back door so that employees going out to the dumpster could look outside first, but a would-be robber had shot an employee in the face through the window at another building, and the architects changed to a blank, steel, bullet-proof door with a camera instead. There were cameras all over gas stations already, to allow the clerks to shut off dispensers if people were smoking and so forth; one more didn't cost that much more. That other employee at the other place died, by the way, and the robber couldn't reach the knob by reaching through the window hole, so he never did get inside.

All the money in such places was treated like radioactive waste, and we used to install safes that were welded onto a sort of steel sled, and the concrete floor was laid over and around them. There was a kind of slot with a slim rammer that you folded folding money over, and injected it into the safe. There was no way for any employee taken hostage to open the safe.

I went through the front door to talk to someone about whatever needed attention before we got our money. It was a conventional convenience store, with all the usual stuff that's in one.  But instead of entering the store, you entered a sort of quiz-show booth, about the size of a roomy phone booth or a cramped handicapped bathroom, maybe. Nothing and no one in the store was accessible to a customer. Items were displayed on shelves facing the door. There was a stainless steel drawer, like maybe you'd find in a supermax prison, and everything going in or out went through it. I was in the noticing business, and noticed that the size and shape of the drawer was painstakingly designed to keep a robber from being able to put a hand holding a gun and turning the barrel up to the cashier when the drawer was half-opened; it would break your wrist to try it.

The glass inside was way, way more bulletproof than the bulletproof glass on the outside. It gave a hint of greenish parallax to the view inside, like everything was under water filled with algae. It was like a window on a submarine. You were expected to point to what you wanted, pay first, and the item would be placed in the drawer. There was no penetration of any kind, and I knew from blueprints that the glass went all the way to the underside of the roof deck, so you couldn't climb over it. You spoke to the attendants through an intercom only.

There was a young girl behind the counter. I am in the describing business, but I cannot do her justice by telling you how beautiful she was. It would be easier to build a time machine, go get Titian and DaVinci and bring them back and have them work in shifts trying to paint her picture. I'll bet the picture would never be completed because they'd be fighting over her with knives before fifteen minutes was up. She was so pretty that a normal person, which I sometimes am, would just look at her, slackjawed, and forget how to breathe or think or behave. If God has some plan for mankind it is surely inscrutable because no one else would put this daisy on the far side of Pluto like that.

She was very pleasant, but didn't speak English very well. I was expected, and even though she was barely an adult, she had been left in charge and given instructions on what to show me. She told me to go outside, and she appeared from around the back of the building and showed me some trifling problem I can't remember right now; a busted hinge on a dumpster corral, something like that.

There wasn't anything left to discuss. We'll fix it, you'll pay, case closed. I leaned on my car and was writing some notes about the meeting, and she put her hand on my arm. She was very worried, and told me that I must leave, right away, because the sun was going down, and very bad people would come out. She pointed to a park across the street and said it was very dangerous, and that after dark no one like me should ever show their face there. She wasn't frightened, exactly; she was frightened for me. I was born a few blocks from that place, and for all I know my parents took me to that park when I was an infant, but I didn't mention that. She lives here all the time now. That's seven no trumps. She went inside, and I left.

I'm told recently that if someone looks at you funny twice, or maybe if a guy with bad breath instead of Fabio pectorals asks you out on a date at your cubicle farm, you're working in a "hostile workplace."

I've been to a hostile workplace. I'll raise my hand when you're in one.
Posted by SippicanCottage at 6:00 AM 28 comments:

Email ThisBlogThis!Share to TwitterShare to FacebookShare to Pinterest
Labels: Bits of my life pulled out and flung on the Internet floor, honest work, reruns
Newer Posts Older Posts Home
Subscribe to: Posts (Atom)