The Heir, the Spare, and Mrs. King and I would like to wish all our friends on the Intertunnel a very Merry Christmas and a Happy New Year.

Because I don't really know you, I'd be more than willing to testify that you're all the nicest people in the world. It's only fair. You don't really know us, but you've mistaken us for interesting people. I hope this makes us even. I am beset by doubts on that score. I have a hunch that the Sippican family is making out on the deal somehow. After all, I'm certain we're not interesting. You might be nice.
Posted by SippicanCottage at 10:20 AM 6 comments:

Email ThisBlogThis!Share to TwitterShare to FacebookShare to Pinterest
Labels: christmas

We Should Have Three Christmases Today

The video's more fun, but the album has better sound: 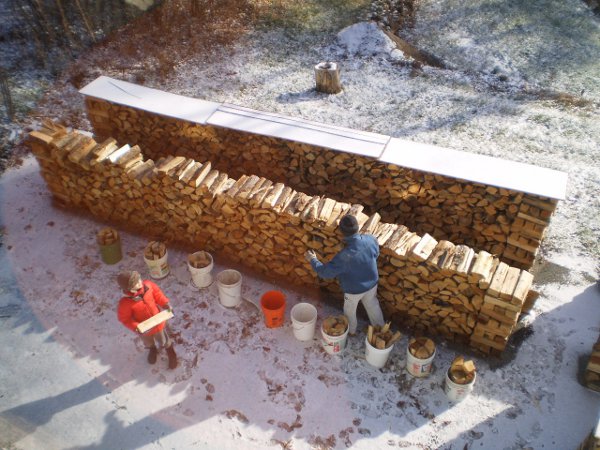 [Editor's Note: Originally offered three years ago. We don't burn firewood any more. Using our firewood furnace with our neglected, unlined chimney was a form of Russian Roulette, but you do what you have to do sometimes to get by. We also got tired of freezing half to death every time I fell asleep for more than three hours at a stretch. We burn wood pellets now, and the Spare Heir follows in the Heir's footsteps by carrying the bags up the stairs]

Winter came like a postcard a long time ago. The snow drifted down in slow motion, the big, fat flakes parachuting in and accumulating gently on the frosted earth. There was a lot, all at once, and in the morning the birdhouse wore a pope's hat, and the birdbath was a cheesecake. The sun shone and the trees wore their coat of flakes like ermine.

Then the rain came. It turned the pope's hat to a drunkard's fedora, and the cheesecake to a dog's breakfast. It came down mechanically, at an angle that could be measured anywhere along its route, as methodical as a secret policeman; the icicles on the eaves turned from a little fringe to dragon's teeth. The trees threw their coats on the ground with their shivering, and left craters like the moon in the slumping snow.

Then it did it all again. Snow fell on top of the icy film over the styrofoam snow, and brought Currier and Ives back to town. Then the ice came and put Currier and Ives in the stocks in the town square for the crime of being jolly out of turn, and pelted them with everything handy. The roads turned to suggestions. The pavement was just the bottom layer of an arctic lasagne of sand and ice and mud and snow and general corruption. My wife's car and my truck told me to shove it more than once when I turned their keys.

Then the thermometer began a truth or dare phase. It had been ten degrees below normal for months, but now it wanted to impress people. Pinch the unwary. Show you who's in charge around here. Twice it showed me twenty below and kept going, and days ticked off the calendar, one after another, without ever reaching the number one. The ladder to spring had been drawn up into the calendar's treehouse. We'd have to set a spell and wait for it.

There is no heat but what we can make. I shoveled the logs into the stove like a man in the belly of some great, dripping, iron ship, while icebergs passed by the portholes in first class. Nothing you could do could touch twenty below. You could set your house itself on fire and not raise the temperature in the living room ninety degrees. What chance do you and your disassembled birches and beeches have?  But one bails a leaky rowboat whether you have a bucket or a teaspoon.

My neighbor passed by and said he was angry at his thermometer today. I understood, because he felt the thermometer had betrayed him. It was still five below at nine o' clock this morning, and that was a shiv in the guts from a friend. He was promised by the man on the TeeVee, who combs his hair a lot, that it would be warmer today.

We were out of firewood. Well, not out, exactly; I'm a fool, but not that big of one. There were still three cords sleeping in the back yard where we stacked them in August to dry. But there was no more in the house. We'd put three cords in the basement, and all but a few junks were gone in a puff of woodsmoke already. It will rain again tomorrow, and be miserable to be outside, and handling firewood in the rain is a penance not to be inflicted on the innocent. The time to get more was today.

My son came out with me. He shows no enthusiasm, but does not complain. It's the mark of an adult, I think. The sun looked like a cataract and hung low in the sky, skulking across the horizon for the few hours it deigns to shine in January, and looks ashamed of itself the whole time. You could look right at it, but why would you? You look at the ground right in front of you, and that's that. We shoveled the top layer of snow and ice to get halfway to the ground, and walked on the skin of ice over the first heaping of snow as we went. The ice was almost strong enough to hold my weight for every footfall, but every once in a while the heel of my boot would punch a hole in it, and my knee would hinge backwards and remind me that I hit a hurdle when I was in tenth grade and that I wrecked a car when I was nineteen. Winter is very solicitous here, and worries you might get the Alzheimer's, and tries to help you remember things.

In the fall, we'd made and installed four, great big swinging barn doors leading out of our basement into the paved yard where the firewood slumbered. The firewood only had to travel twenty feet. The nature of those twenty feet was the issue. There was a buttress of ice eighteen inches thick holding the doors closed. The eave above had basted the snow that collected there with water, over and over, until it was as solid and unyielding as any revetment. We stood like Napoleons looking longingly at Moscow in the winter.

My son got an iron bar we keep for some reason. It's six feet long, as big around as a toddler's wrist, pointed at one end, with a sort-of chisel at the other. This tool is of absolutely no use, until it's essential, like a lawyer or a prostitute. I laid into that bulwark of ice like, like -- like it was the only thing between me and heat tomorrow morning. Ten minutes and the big door swung clear. We dumped the plywood that covers the woodpiles overboard, and then layed them on the iffy ice and snow layer cake on the ground. We rolled a handtruck back and forth over them, and assembled the clanking junks of wood into a wall four feet high and twenty-four feet long in the basement. People here call a piece of firewood a "junk," and firewood that's been dried properly rings with a ceramic tone when you handle them. The last of the wood outside came hard; frozen solid six inches below the level of our feet. The iron bar levered them out, and they joined their brethren. The last of them will no doubt go in the furnace still wearing their necklaces of ice, because it's not warm enough down there to melt it.

My son, who is no longer a child, really, never flagged, never complained once. We spoke almost not at all, because there wasn't much to say. The work would whisper done when there wasn't any more of it. I thought to myself that I would not have been able to do it without him to help me. I wondered -- I very dearly wished -- he might say the same thing about me.
Posted by SippicanCottage at 12:22 PM 11 comments:

Email ThisBlogThis!Share to TwitterShare to FacebookShare to Pinterest
Labels: Bits of my life pulled out and flung on the Internet floor, Maine Family Robinson, reruns

We Don't Notice Any Time Pass


That was four years ago. We have to turn on the radio if we want to hear the big one's voice now. And the little one is five-foot-ten.

Posted by SippicanCottage at 6:48 PM 4 comments: