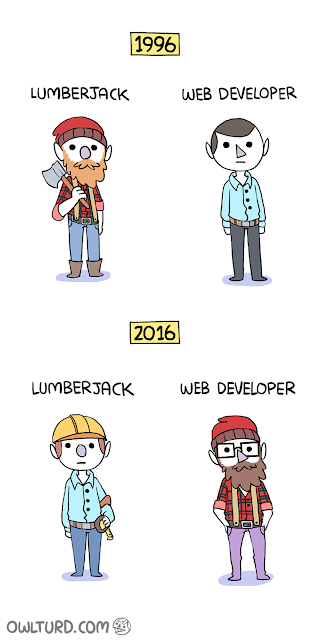 I live in Maine. Maine is, how does one say it -- different.

I don't pretend to understand Maine. I just live here and get along as best I can. As far as I'm concerned, Maine lets me sleep on the state's couch, so it would be impolitic of me to start complaining about the accommodations. It's like being Maine's indie-rock drummer. Anyway, I just look on in wonder, and wonder.

Last week, a guy that I don't know, but know people who know him, tried to commit suicide by shooting himself in the head. Three times. With a flare gun. While parked by the side of the road. In his truck. Which runs on propane, for some reason. He didn't die, because two passing motorists saw him and pulled him out of his burning truck. Because Maine.

Every single person in Maine owns a gun, but no one ever shoots anyone else. They won't even shoot themselves with a gun. They generally commit suicide by texting and driving.

The classified ads are a little different around here: 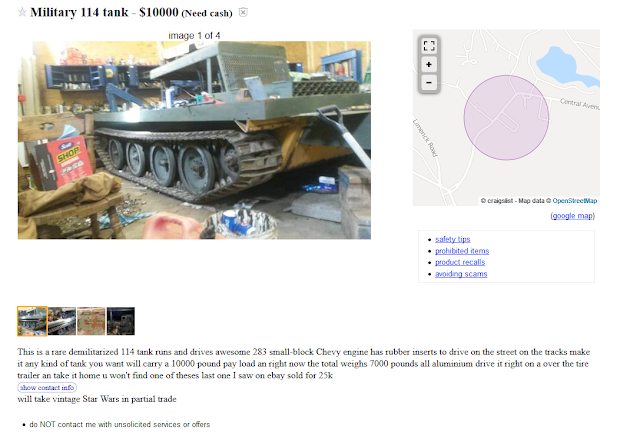 That's a real Craigslist ad. The fellow is selling his "tank." Needs cash. Don't we all?

It's from far-southern Maine, at least compared to where I live. You can tell it's not from real Maine, because the ad is on Cragislist, not Uncle Henry's. Real Mainahs use Henry's. No one actually sells anything, though. You can put anything in Uncle Henry's, but it will never sell. You'll just be swamped with calls offering to trade things for what you've got. I put a drum set in Uncle Henry's, and was offered everything in trade from firearms to boat motors. Everyone has everything but money in Maine.

The syntax in the ad is pure Maine:

Of course it's not a tank. It's an armored personnel carrier, the M114. It was popular during the Vietnam war. Of course it was popular with the Viet Cong, not Americans, which is why a guy in Maine was able to buy one. It's made of aluminum. If you've ever gotten the urge to go to war with an overturned bass boat over your head and tank tracks under your feet, this is just the ticket. Some M114s were fitted with a Red Ryder-grade turret that made it nearly a tank, almost, kinda, sorta, but for the most part, you just shot back with whatever you had handy. Like a flare gun or something.

Anyway, the advertisement buries the lede, as they say in the newspaper industry. I call it saving the best for last:

So. Very. Maine.
Posted by SippicanCottage at 1:53 PM

Email ThisBlogThis!Share to TwitterShare to FacebookShare to Pinterest
Labels: Maine

There is some great stuff on uncle henry's i've checked it out online...too bad i live a ways a way from there...

I needed a laugh tonight, having done a face plant on a brick sidewalk today, damaging my hand. My brush hand. Ah, me. In any event, all will be well in a few days, and in the meantime I have this to re-read whenever I need another chuckle. Of course, I still re-read the Borderline Blog for Boys, too. It helps to keep me grounded, or whatever.

That cartoon at the top's funny, too.

It's the torsion bar suspension makes it the worst choice. I need an idler wheel, or Christie. Tanks, but I'll keep looking.

OK. I was trying for a Maine syntax there. Darn me. I may be strong minded on my taste in tanks, but have no mind of my own when it comes to language.

I'll see you your Mainer attempting Harry Carry with a flare, and raise you 2 school girls making their getaway from bank robbery on the county bus line. Nutty is as nutty does.

A place where a man can grow cranky, it sounds appealing.