In a Fascinating Coincidence, 'Tool Rental Faux Pas' Is Also the Name of My World Party Tribute Band. But I Digress 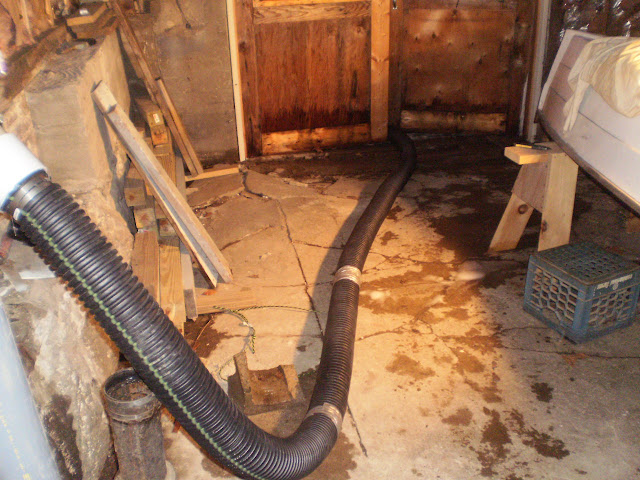 I nimbly recovered from my tool rental faux pas. I asked the rental dude how business was going, and he unloaded on me like a Home Depot toilet. Winter is the wrong time of year for construction in Maine, but that was the least of his woes, apparently. No one was doing nothing, he said, and I understood the grammar and the sentiment. I could have said or done any number of unpleasant things to him, accidentally or not, and he still would have been nice to me. I was renting something when no one else was, and by asking about his livelihood I was saving him big money on psychotherapy.

I rented the Electric Eel, and signed up for 50 feet of cable. The cables for a drain auger come in 10-foot sections. They have a simple, durable, and foolproof mechanism for joining them together. There's a spring-loaded button you depress, which allows you to push two fixed pins in slots on the end of the last section. When it's fully inserted, you twist it to lock it in, and the spring-loaded pin pops out to make it impossible for it to come loose unless the pin is depressed again.

If a section of cable became detached in use, you'd be totally boned. There would be no practical way to retrieve it, short of excavating the pipe and busting it open. The ground around here can freeze four or five feet deep in the winter, and I knew that if I lost a piece down the pipe, I might as well put the family in the car and drive away from the home forever. A tool rental house is like a weird, useful version of a Blockbuster Video. Remember paying $79 for an overdue VHS tape that cost $9 to buy outright? Yeah, it's like that.

For listening to his tale of rental woe, the clerk, who I suspect was also the owner, gave me three extra lengths of cable for free on the way out the door. He had no fear that anyone else would rent it, because business was a-mouldering in the grave. He figured he might as well have one satisfied customer, because he was only going to get one shot at a satisfied customer all day. I was.

We had to get cracking the minute we got home. I couldn't really afford a two-day rental. Also, my eyes were turning brown. We were immediately confronted with one of the reasons we didn't call a plumber, besides pauperism. There is easy access to the sub-basement through big double doors in the back of my house. All that was necessary was for me to remove a five-foot-deep, glaciated pile of snow from the driveway that leads down there. We abandon that part of our parking area in the winter because we shovel by hand, and it would be stupid to even attempt the steeply sloped, long driveway. We park in front of the house, and we throw the snow over the railing onto the pavement leading down to the back. I might not be able to budge the pile with a front end loader after it's been sitting in subzero temps for a while. I don't even have a front end loader. I've been meaning to buy my wife one for her birthday, and then borrow it from her, but I've never gotten around to it. So with some slipping and sliding and Anglo-Saxon words, we managed to carry the tools up and over the arete of snow, and set up shop in the basement.

First things first. Let's stop the bleeding. I had purchased a big long length of corrugated drainage pipe. It was one of the long list of things the Home Despot clerk told me was the  wrong thing for what I was doing. I then took a plastic fitting that the clerk nearly pulled out of my hand when I picked it up, because that didn't fit in with his plans for my project, either. I almost had to shoplift it to get it out of the store, but eventually he relented and decided to let me, a damn fool if he ever saw one, buy the thing. It was a step-down fitting designed to attach plumbing pipe to drainage pipe. I turned it around backwards, and put the corrugated pipe over the small end instead of inside the large end like it was intended to work, an approach that I was led to understand wouldn't work because you're wearing an orange apron and I'm not.

Then I took two big hose clamps that are totally wrong for my situation, and put them around the outside of the pipe and the fitting, and I socked them down hard, which I realize is all wrong because reasons. Then I disconnected the sewer main about four feet above the floor, and I slipped the large end of the wrong fitting the wrong way over the wrong kind of pipe, which fit perfectly. Then I ran the coil of drain pipe across the floor, out the doors, and across the parking area to the grassy area in the back yard.

Then, I can assure you, I did not instruct my lovely wife that it was OK to run the washer and flush the toilet full of piddle if she needed to, because that would have totally turned the back yard into a Superfund site. That kind of groundwater pollution would have been totally unlike washing a car in the driveway and having six of your neighbors' dogs take a wiz on the lawn.

[to be continued]
Posted by SippicanCottage at 1:51 PM

Also, my eyes were turning brown.

Ha! - I haven't heard that gag (or any reference to it) in a good long time.

As long as you didn't get the corrugated hose that has the drain holes in it ....

"They have a simple, durable, and foolproof mechanism for joining them together."

Sir, I must differ with you on this one. I have seen many things that are highly idiot-resistant, but I have never seen anything that is fool-proof.

So on top of all your other ignorance, you hate dogs too! You hater!

We hired a contractor to renovate our basement laundry room floor...
He managed to fill the new drain with concrete ;-)
To remove the concrete he rented a sectional drain cleaner like https://www.ridgid.com/us/en/k60-sectional-machine
This was a machine he had obviously never used before, because he forgot to take the cable housing for the extra length of cable coming out of the back of the machine. (There is no drum to hold the cable)...
I remember seeing the loose end flailing around the room as he tried to slowly auger out the concrete...

Moral: If the machine seems extra dangerous to operate, it's probably being operated incorrectly.

I've been alternately horrified, amused, bemused, and finally satisfied by the long retelling of what will surely become a family legend of sacrifice, heroism, and "git 'r done" grit under the most trying conditions...

Thanks for the John Brown's Body reference? Is anyone still singing it?

Grassy area; I was afeared of a grassy knoll, but you'da had to steal it from Dallas, so that's right out.

RonF, our schools are turning out a much higher class of fools these days.