A Grand Day Out


My two sons, AKA Unorganized Hancock, are performing at the Shea Stadium of our little mill town tomorrow for the Fourth of July. 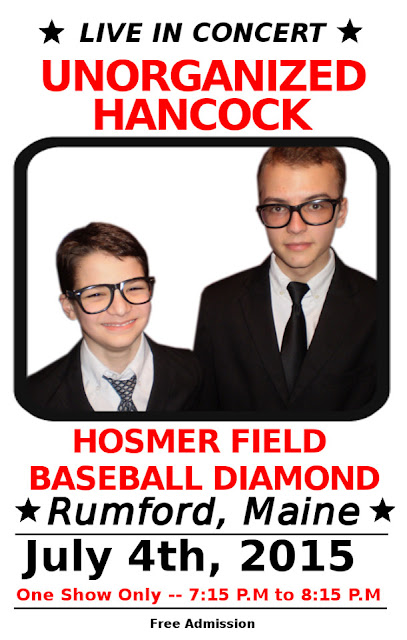 Rumford is the county seat, so the fireworks afterward will be fairly elaborate. They'll likely be hundreds of people in the audience. The Facebook event page has over 350 people who say they're attending, and there could be ten or twelve people in Maine that don't have Facebook, so a few more could show up.

The boys are able to perform in front of a large crowd outdoors because my readers have supported them via the tip jar in the right hand column, and we were able to purchase a sound reinforcement system with the proceeds, among other equipment. If all you lovely people ever wonder if you've ever helped those boys, there's your evidence. My wife and I are very grateful to everyone that's shown support for the boys in every way.

Unorganized Hancock will also be debuting another original song at the show. Be there or be square. It's OK to be both, by the way.

Good to hear they're making the Big Time! I gonna be square with you: I can't make it, bein' on the far side of both the wide Missouri and the wide Mississippi. I'll be with them in spirits (both micro-brews and distilleries in my town and area).

Is there a CD in the works? If so, put me down for one. Maybe two.