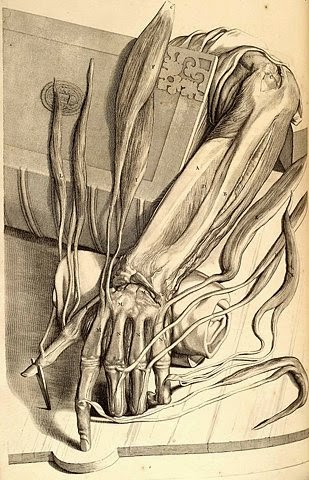 I did something well out of the ordinary yesterday.

Or was it Thursday? I don't know. Or is today Thursday? I don't know what day it is, or what week, or the month, because these concepts have no meaning to me anymore. Time passes and that's that. I do what I do, day and night, winter and summer, Christmas or Lent -- it makes no nevermind.

As I was saying, I did something out of my routine. I left my house. I got in my truck and drove perhaps a half-mile. My wife knows how I am, and has a mordant laugh at my expense: I do not know how to leave my house. What is it I need? A wallet, I guess, some keys, if I remember correctly. I'm required to wear glasses in order to drive, but I don't even know where they are most of the time, because the law and I have different opinions.

I have different opinions than everyone about everything, it seems to me, so I keep them to myself. Other people avoid rubbing their neighbors the wrong way about this or that, and simply skip over the few topics not held in the same esteem by both parties, whistling past the graveyard of opinions that bring only discord. Me? I avoid everything.

I could be a Savonarola. Mussolini on the balcony. I'm good at it. I'd say I'm better than most, but that would be lying. I'm better than everyone at it. It's just another topic for me to be at odds with everyone about. I have no desire to burn people at a digital stake all day. Or, more truly, I know in my heart that I have the desire to burn real people at a real stake, so I'd rather not travel down that road even one inch. It's not simple human kindness exhibiting itself on my part. I'd have to pay attention to people I find repellent, and I haven't got the stomach for that. I do carry matches, though. Just in case.

Back to the topic. I left the house. Found my glasses and keys, and we set out on our five-minute journey. My wife and I used to walk around the neighborhood for a fresh air and birdsong interlude, but I got tired of ill-mannered dogs and vinyl siding, and gave it up. But I know where everything is, and what it looks like around here. I live in a mill town, given to dreariness on a good day, and the last good day was thirty years ago. My wife had gone out alone to escape the house with three versions of me in it, and had seen a wonder, and wondered if I'd like to see it too.

On a street not far from here lives a man. I do not know him, but I have waved and said hello. He is salubrious in a way I admire. He has lived here forever and a day, I imagine, and watched his town disintegrate. He refuses to go along. His house is conspicuous. It is so yellow that Van Gogh would throw in the towel and go back to the store and start shopping for raw umber. He crawls up and down it, and all around it, and it is as neat as a pin. He does everything himself. He put up a big fence around his yard, an enormous undertaking, and never flagged until he was done. Every surface is clean and bright and in good repair, everywhere you can see. It is the only structure in this town I can describe in that way.

We stopped walking down his street a while back because his neighbors were disreputable. On one side was a house gone to seed for forty years or more. The denizens had approximately 150 snot-nosed urchins who played in the street, which I rather enjoyed seeing, but they kept two, hair-trigger pitbulls the size of donkeys, and you could never tell if they were tied up or not. These animals represented a desire to publicly contract ebola so you could get your own seat on the subway of life. Fine by me.

On the other side of the neat house was a two-family affair that looked in rather better shape, but that's not to say good. There were no obvious structural issues visible to my eye at two hundred yards, which is more than I can say about my house. The house had been occupied by a series of Hatfields and McCoys, cars by the dozens, but somehow never with an even number of tires, abandoned toys everywhere, stray cats outside and stray people inside. I never saw an actual person who lived there outside, a mark of the breed. One minute the window curtain would be a confederate flag, then the rental merry-go-round would spin and a Sponge-Bob beach towel would take its place. The stray cats were the only constant.

The man in the perfect yellow house persevered. He painted his driveway and waxed his lawn and dusted his roof shingles. He polished his trees and chromed the inside of his mailbox. He was adamantine. He was, and is, a species of wonderful.

He must have gotten weary of the noise, and the trouble, and the endless low-rent hubbub. I testify to you, with God as my witness, that when the houses on both sides of him decided to spin the wheel of occupancy one more time, he bought them both, and he gave them the delenda est. Flattened them. There was a pile of lead-painted pickup sticks on one side, waiting for the next round of dumpsters, and the one on the other side was nothing but a patch of straw with the first hint of grass yet to poke through.

That man knows something. Something important. It's not that he knows exactly what would show up in the two houses when the For Sale or For Rent signs came down. He's not pretending to tell fortunes at the fair. What he knew, for a dead cert, was that there was no chance of any change bringing anything but: Worse.

I should get out more often.
Posted by SippicanCottage at 10:36 AM

Sometimes you have to fight entropy with the second law of thermodynamics.

The man in the yellow house knows the value of a secured perimeter.

What he knew, for a dead cert, was that there was no chance of any change bringing anything but: Worse.

Yup. Good for him, and I hope he's hit on the way for things to get better instead.

His only alternative was tying 10,000 balloons to his house and flying it to South America.

I'm guessing it's "just the gypsy in your soul". And it sure looks like the fresh air and change of scenery did ya good. Got the juices flowin'.

I can think of several US cities where that approach might work...

leelu, I can think of a few cities where D 10 Cats would bring an improvement.

And, yeah, I'd like to have a neighbor like Mr. Yellow House but I'm not gonna move to Rumford. It has been said that ten months of Winter and two months of bad sledding can stultify a fella.

What a chap! I too bought my way to no neighbours, result a happy me and more people in the world never having to suffer the ever so quietly fuming me.

The Little House comes to mind http://en.wikipedia.org/wiki/The_Little_House I think I live there now

My next-door neighbors are OK, but on the other side of Them, there's a pigeon infested rooming house. (I can see the pigeons, don't know what else may be infesting it). I've sworn that if it comes up for sale, I'm gonna buy it & tear it down. Plain green grass would be a blessing. When I mention my "plans" to other neighbors, they get all "deer in the headlights" looking. Oh well!

"What he knew, for a dead cert, was that there was no chance of any change bringing anything but: Worse."

And this, sadly, is the current state of America.

Vincent grunts, says something in a Dutch-French dialect, and rolls over in his grave. Houses?

It's a strange world out there, and I don't venture forth much.
I also don't view it from the electronic hearth either.