Highlights of Life in Western Maine From the Rumford Meteor 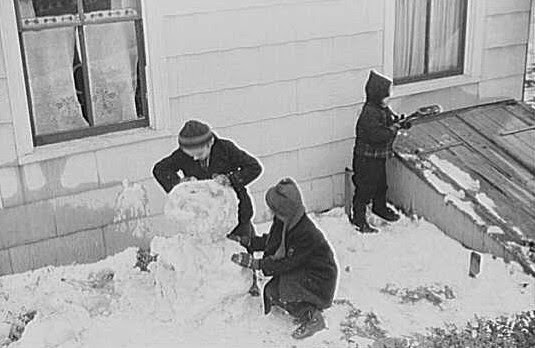 Well, it's snowing. Luckily for us, it's only snowed once this year. Snowing continuously from January 2nd until tonight is still just once, right? It should stop before noon on Father's Day so we can have a barbecue, so it's no biggie, really.

It's hard to while away the hours between chipping the ice off the seat in the privy in the morning and putting the cat out at night for the seven seconds of outdoor time he requires daily. In between, we like to peruse the Rumford Meteor for all the week's events up here in the Pine Street State. Er, I meant Pine Tree State. It's nice to sit by the stove and feed in the pellets while munching on the ones that get stuck in the auger. They're like miniature pretzel rods. Anyhoo, here's the best headlines from the Meteor, so you can learn why the slogan on Maine's highway sign used to read The Way Life Should Be, before all the shotgun blasts from passing hunters turned it into "The Waif hole" with an interesting kerning structure.

To my eye, the writers of the stories on the Meteor have done a fair job of gussying up the news so it won't hurt any feelings -- like telling a man that his wife is purdy and his kids are smart, even though his wife was thrown out of the roller derby for leaving grooves in the hardwood floor, and his kids lick the bus windows on the way to the learning center, which is what I gather they call school if the kids consume more crayons than reading material. After all that work by the staff, the headline writer goes and ruins the effect by blurting out the truth like a frostback Forrest Gump or something. That's a hamfisted way to run a paper, but it's all we got until the dogsled brings the serum and last year's Globe to replenish the privy nail. Enjoy!

Maine to Receive Yet Another Foot of Snow. Meteorologists Wonder How This Might Affect New York City

Portland Cited Among Top Cities for Gay Traveling. Critics Say They Should Be Required to Dribble the Ball Every Two Steps Just Like Everyone Else

April Is Sexual Assault Awareness Month. If You’re Unaware You’re Being Sexually Assaulted, Maybe You Should Lose Some Weight

Hollywood Casino Revenue Dips When A Guy Pays His Rent Instead


Many more at the Rumford Meteor

Update! I just checked the weather report. Hmmm. Al Gore must be in town. Ah, well, that's the beauty of Maine. It's reliable: 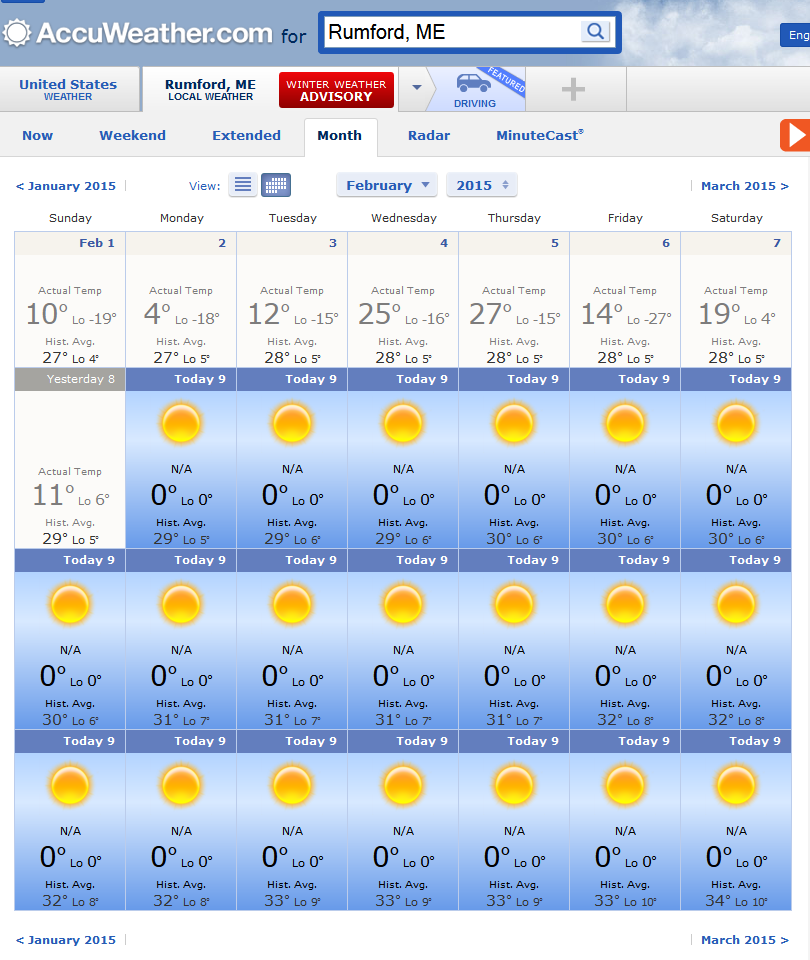 Posted by SippicanCottage at 9:37 PM

Well, ya gotcher sunshine, that's something. A lot of countries in the world, they don't even have sunshine.
I guess that's what they mean when they say "stick it where the sun don't shine". We supposed to send it to one a them countries along with the food we don't eat at supper. Usta be send it to the starving kids in China but I think the sunless countries took over that job.
My uncle Letsgo Lozko, he wanted, send some chickens over there but the post office wouldn't let him, even if he did cut breathing holes in the boxes. Go figger.

The most popular name for newborn males in London is not Patel.

That's not sarcasm, it's actual fact.

Well, looks like that snowstorm is over, if'n the forecast is correct, improving your chances for having a second. Obviously that snow ya got there ain't gonna melt, but it may well sublimate (turning directly into vapor) some.

almost time to get out the long-sleeve shirt?

I laughed and laughed, not at your weather, but at the headlines. I won't mention my weather. (It is slightly better than yours.)

Leslie: I'm in NM down around the border. The farmers are starting already. My weeds are a foot tall here in town. Sheesh.

Chasmatic: My yard is full of African Daisies and I just took a walk in 81 beautiful degrees. Oops, I said I wouldn't mention it...sorry, Sipp.