The Greatest Play In NFL History 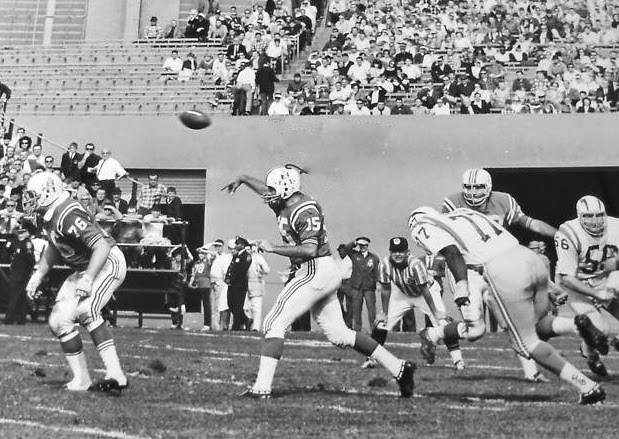 I understand that there might be some dissenting opinions about this. You might prefer catching a wild throw against your helmet. NFL films prefers the Immaculate Reception. Tuck rules and field goals in the snow are mentioned. I'm sorry, but there can be only one. And as far as my blogpost title goes, I know it wasn't even the NFL then. The greatest play in NFL history happened in an AFL game before they merged the leagues. I don't care. It's all applesauce. Hear me out.

They were still the Boston Patriots at that point, and didn't have a home. The picture is Babe Parilli heaving a duck to a patch of infield grass with no one standing on it in Fenway Park. That's where the vagrant Patriots used to play. They also played at Harvard Stadium, and at Boston University's Nickerson Field, on Commonwealth Ave heading towards Brookline. They were the half-a-joke of Boston Sports. No one cared about any kind of football in Boston, and three-quarters of New England were Giants fans, anyway.

I've had a lot to do with the Boston, er, New England Patriots over the years, all strange. I almost died in their driveway. I once stood on the fifty yard line of their new stadium while a half-dozen of us decided to change a thirty-year-old NFL rule, and did. One of my friends owns the crappy Astroturf endzones from the old stadium they had in Foxboro, before they built that stripmall thing they have now. I broke my ankle once, and attended an event at their stadium by being thrown over the chain link fence by my friends. Don't misunderstand; I showed up with the broken ankle. My roommate used to counterfeit press passes and stand on the sidelines.

At any rate, my intimate knowledge of the Patriots is a testament to the fact that they were nobodies, because I'm a nobody. But sometimes, nobodies have a profound effect on things, don't they?


I know Seattle likes to think that the people in the stands are their twelfth man, but talk is cheap, son. Get out there and make a play, or put a sock in it.
Posted by SippicanCottage at 10:07 AM

Email ThisBlogThis!Share to TwitterShare to FacebookShare to Pinterest
Labels: 1960s, Boston, football, was football, what it was

Too bad he didnt pick it off and go the distance for the td.