In Conformity With the Severe Discipline of My Country


Within this recess was found a human skeleton, of which the hand still grasped a lance. Conjecture has imagined this the remains of a sentinel, who preferred dying at his post to quitting it for the more ignominious death, which, in conformity with the severe discipline of his country, would have awaited him. -- Pompeiana, by Sir William Gell


When I was a kid, they built a concrete highway through the woods, from nowhere to noplace in particular. When I gold older and went feral, we used to drag race on it in the evenings. We painted stripes on it and everything. Drag racing on a deserted highway was already twenty-five years out of date, but everything in my life was always that way. Life was a live baby born to a stillborn mother.

Eventually the highway was connected to other things, and things happened around it whether they should have or not. They should have called it the chicken and the egg highway. You could put a highway from Hell to Purgatory and people would move there from Paradise, because: Hey, highway!

The highway killed the other highway that had no business being there two generations before. The pizza place with the picnic tables still hung out the pennant flags to flap themselves to their component atoms, unseen, while the cars went kachunk-kachunk-kachunk over the new pavement, just out of reach forevermore.

There was a time in the fall, after the leaves had scurried to their winter homes on the ground, when you could see a ghostly billboard way out in the woods as you went by doing seventy, easy. RED COACH GRILL. It was made to tempt men in fedoras to peer out of their beater car windows and find a place to squat in an ersatz captain's chair, eat pot pie, and wash the dust of their sales route out of their mouths with Seven and Sevens until the million knots in the pine swam before their eyes.

The sign stood in the woods like a sentry in Pompeii and told only the deer, in runes no one understood anymore, that they could have it all back. 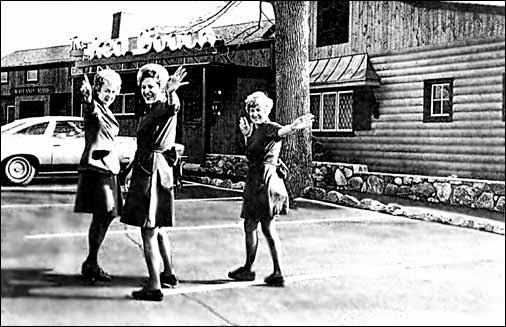 Posted by SippicanCottage at 3:22 PM

Da Bros: Is one of the bros a cross-dresser? If not, which one of the sistas is Rose, and why did they not name the otha sista? I mean, what's it all about, Alfie?

As for the text, I shall have to dig out my copy of the Necromicon, light a candle, and study it for hours at midnight (or midnite for one less hour) to try to attempt to understand this ancient text before Nyarlathotep crawls into my pantry and eats my snacks.

(Which makes a lot more sense than spam-bots do.)

Thanks, Bob. Always a pleasure to see your name.

Also, I just want to remind everyone how much I like Sam L., and thank him again for his direct mail contribution to the tip jar. The boys have been hoarding their tip money,sent in from a lot of nice readers, in order to buy a real, live video camera, and that nearly put them over the top. Many thanks!