You Might Think This Was The Most Maine Thing Ever 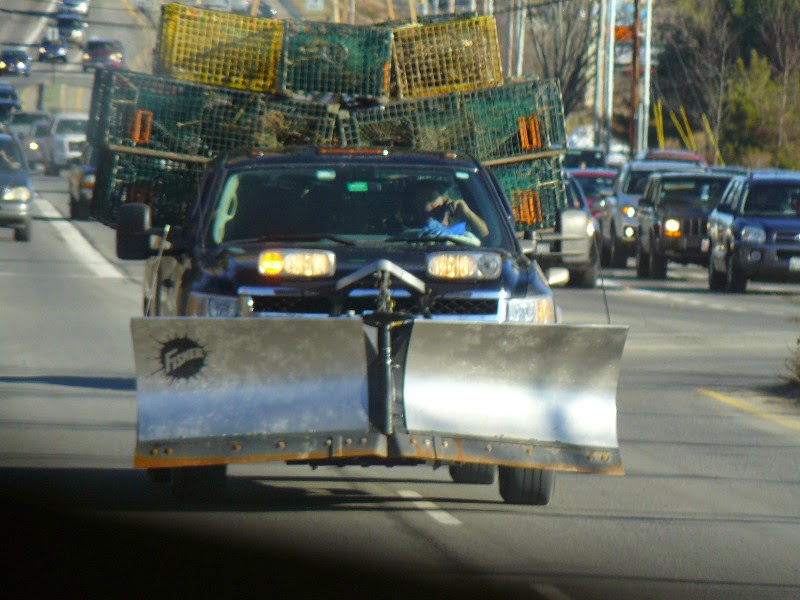 Well, it's right up there, but I have serious doubts whether this is the most Maine thing ever.

For starters, the plow is shiny. Shiny, people. This plow is obviously new, or stolen. Maine people don't own anything new, or steal. They rescue all the copper pipe out of your camp house if it's empty for more than a month, and they borrow grandma's Oxycontins to use as currency in Bangor until their medical marijuana prescription comes around again, but they don't steal. If that was a true Maine plow, it would be rusty, and leaking hydraulic fluid all over the road.

I notice that the headlights are working properly. That is also suspicious. He's straddling the lanes nicely while yammering on the cellphone, and the skin on his porcine arm looks like a sausage casing that's about to burst, and those are marks in the photo's favor. It would be slightly more Maine-ish if it was a single mother in a Dodge Neon with an unbelted baby in the back seat, texting while driving 70 on a road last paved in the 1960s to get to a party being held in a single-wide trailer, but the lobster traps do keep this one in the running. Besides, in all the pictures I have of Dodge Neons, the car is upside-down, and they're not as interesting to look at.

This could very well be Maine, don't get me wrong. But all the door and body panels on the truck are the same color, which gets my Charlotte's Web spider sense tingling. That reeks of Rye, New Hampshire, which is like another planet.There's no way to see if the guy is wearing jorts and shower shoes in the wintertime, which would settle this thing once and for all.
Posted by SippicanCottage at 10:12 AM

Ha. My first car was a Dodge Neon.

Yeah, it ain't, well, rustic enough. I'd bet he bought the whole rig as is at L.L.Bean. I been there, once; kinda stuff they got.

I can see that you are a man who knows no fear. On the other hand I can also see you relaxing after writing this because you are convinced that the natives don't actually know how to read... :)

Pavement. At least you guys have pavement. Down around my place the only pavement we got is on the Border Patrol airstrip. Guys put their cars up on cement blocks so they won't get stolen all at once. One fella, they took the blocks and left the car. It was a Neon if I remember right, the blocks were a better score. There's another guy, got an old washer and dryer in the back of his truck. He just drives around with 'em everywhere he goes. Says it's so his buddies can't mooch, get him to move their furniture for them. Another of our locals has a handicapped license plate on his Harley. Go figger.

I have a long driveway but I won't hire any of the locals to plow it in in the winter. Did that once and he knocked over the stones in the wall!
Besides since I retired it's more fun to go out at 2am and run the snow-thrower back and forth and if I wake the stock broker in across the street its' all good.

Well,judging from the size of that road the only place it could be is around Portland! Agree with everyone that the truck seems to be of a gentleman lobster fisherman/plowed.