For Some Inscrutable Reason, Google's Robot Reads This Story Every Day

From: The Devil's In The Cows, by Sippican Cottage 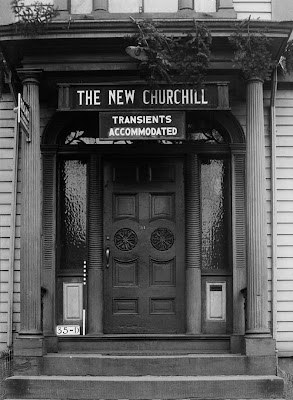 "Accommodated." Beautifully put. The place is full of men never cracked a spine except in a fight, and the proprietor puts up a sign that reads: ACCOMMODATED. How about: PUT UP, and PUT UP WITH? Farmed? Stacked like cordwood? Buried like a Pharoah's handlers -- still alive but not going anywheres?

I climb the steps feeling like those Aztec fellows must have felt on the way to the top of those big stone wedding cakes they were partial to, in line to have their hearts tugged out -- we were both born to appease some god with a perpetual toothache. The world is more of a theoretical place now, but that just means you can have your heart extracted every day and it grows back for the next. Like Sisyphus in the school book. No, that's the guy with the rolling stone. No matter; it's the same sort of story, anyhow.

There's no call for stacking one stone atop another right now, never mind just rolling one around. The last stone we got to push uphill got rolling a pretty good clip, and a body got winded real fast chasing it down the hill. After a while, perhaps a regular guy can be forgiven for thinking he might like to stop and rest a spell, then try again later. By the time he's picked himself up and dusted himself off, that rock has rolled all the way out of sight. But even a man prone to fooling himself can't help but notice that the place he chose to stop and rest has a row of bottles behind the counter.

The house itself is like a woman grown old, missing a few teeth, gone thick and manly. But you can tell the ruin used to be something. The old frame shows something of the heretofores. I heard tell a captain of local industry built it to prove to everybody that he had finally made it big in this old world. He said prove it to everybody, but really meant to himself, I'll bet. The bank took it from him the minute a dark cloud appeared on the horizon, and showed him that the world has no opinion. Now find somewhere else that'll accommodate you. The old dust-catcher and soul collector is currently accommodating the men who heard about the fishing or the potatoes or the blueberry farms or the logging. Trouble is, they heard about two decades ago.

The inside shows nothing of the exalted past except the ghostly outlines on the plaster where every bit of the extravagant gimcrack was removed. If it was worth a damn, they pulled it out and reassembled it in a big, new house in Washington, D.C.; no doubt to prove to someone else that they'd finally made it in this world by presiding over the desolation of a lost one. Fitting.

The bank stuck a hard guy behind a counter in the front hall that doesn't care if you pull a razor or a roscoe or a long face or whatever. He collects the money if you got it, our your scalp if you don't. I like him, though, because he treats me the same as the rest. We do our business and he pushes the key across the pockmarked counter and there's no accusation in it. No kindness. Nothing.

It's the nothing you crave. It's -- accommodating.


The Devil's In The Cows, now discounted and Prime eligible at Amazon
Posted by SippicanCottage at 11:11 AM

Google must love it as well as I do.

Discounted? Did I buy it too soon?

Well, no, I got my money's worth, though my money isn't worth as much as it usta.

it's cause google ain't stupid.

Sisyphus pushed a rock up a hill every day and it rolled down at the end of the day.
Prometheus had his liver eaten every day and it regrew at night (the liver has the capacity to regrow).
I think those of us who work for the rest of society are both. We work without end and have our bodies destroyed.