Notes From The 2014 Fryeburg Fair

My two sons, AKA Unorganized Hancock, performed at the Fryeburg Fair on Sunday.

The Fryeburg Fair is the last big agricultural fair of the season in Maine. It's the biggest one in Maine, and it's considered a plum to get a job there as a performer. The boys played in a little bandstand called Draft Horse Park. 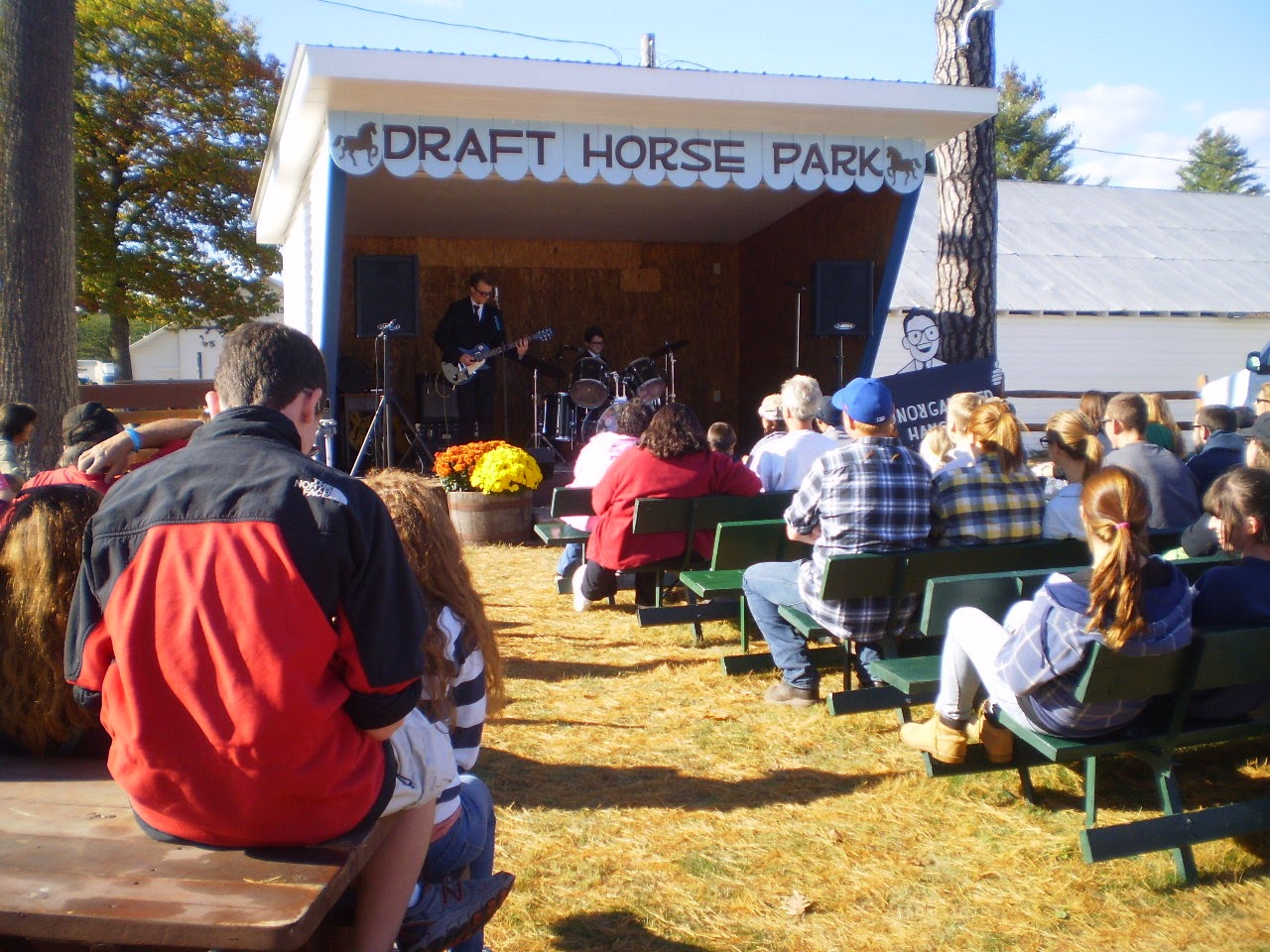 There were nice crowds for all three of the shows. I especially liked seeing all the little children. There were a lot of strollers, and toddlers toddling around. The bandstand is at a crossroads betwixt a congerie of footpaths, and most of the crowd simply pauses on their way by. There were many excellent double-takes when people looked to see who was playing like that, and saw my two midgets instead of the four adults they were expecting. 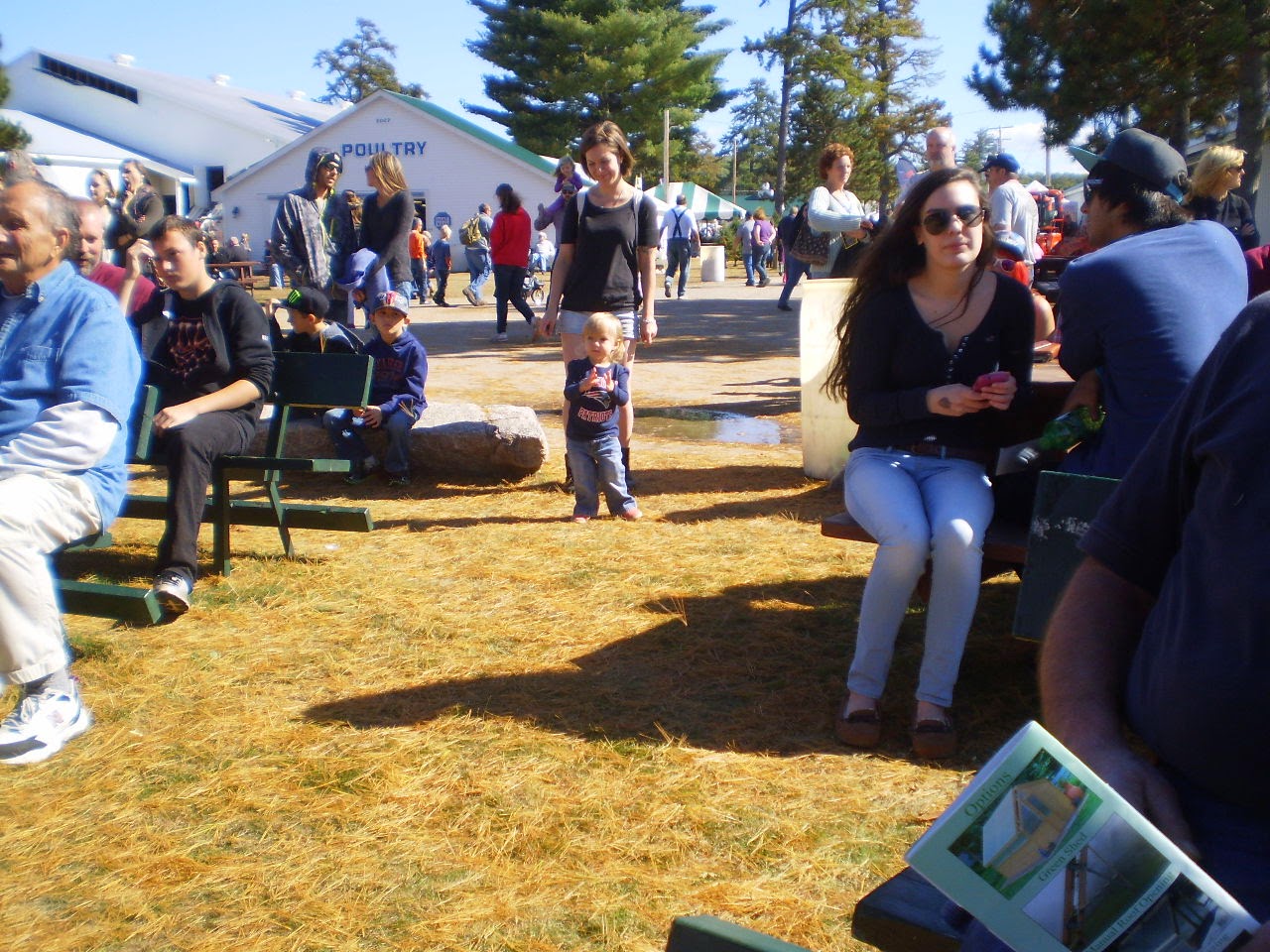 There was a monsoon on Saturday, so it was a blessing they had three Sunday shows. It's very iffy to have outdoor performances in Maine in October. Last year when the boys performed, it was in the low fifties, completely overcast, and it rained like crazy five minutes after they were done. I commented to my wife that they should schedule the fair a week earlier, and thereby avoid a lot of weather-related problems. The fair responded by sending out a notice that next year's fair will be held a week later than this year's. Every day is opposite-doppelganger-upside-down day in my life, and on every topic. 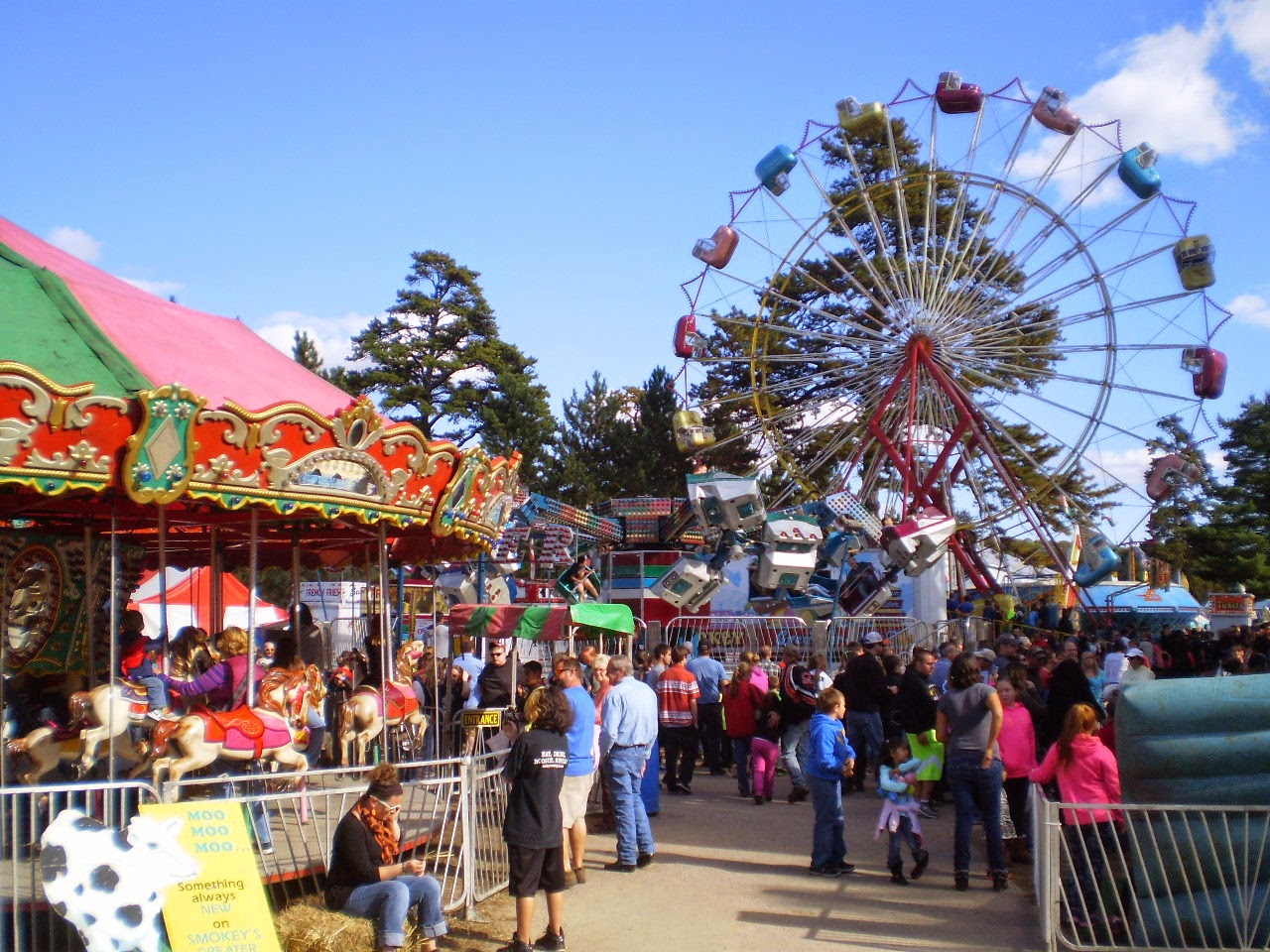 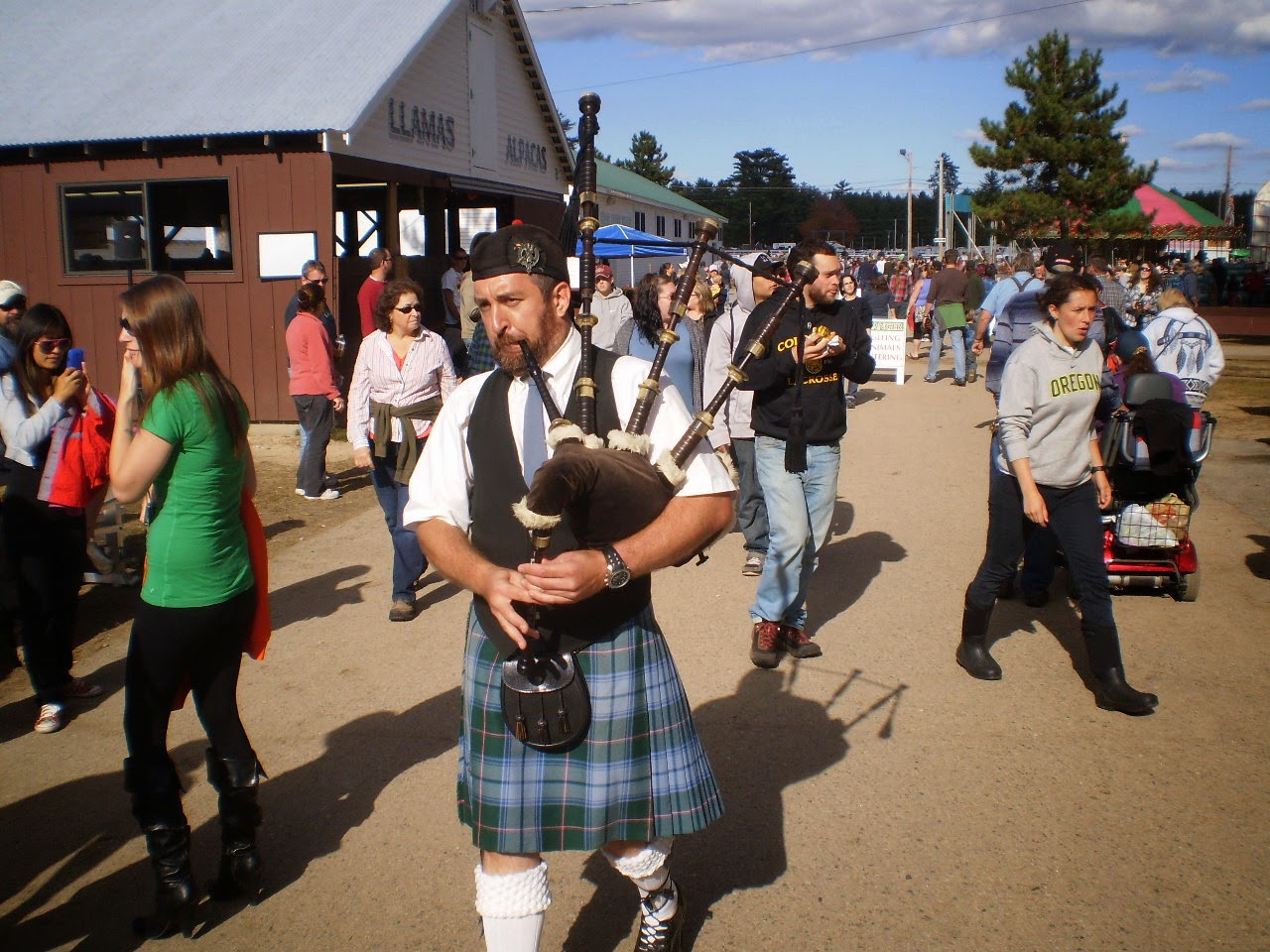 I'm kidding, of course -- it's worse. Ninety-nine percent of it is the playlist from any FM rock station in 1978. When we rolled into the parking lot, I rolled down the window to talk to the attendant at the gate, and the first thing we heard was a wan version of Margaritaville, which was plenty wan enough when it was first released if you ask me. I played that song for money a hundred thousand times, and twenty years ago I couldn't figure out why anyone would ever want to hear it ever again. Why they'd still want to hear it baffles me even further now, of course.

I ruminated on the topic a little bit. The big shows at the Fryeburg Fair are held at night, and the biggest act they had was a Billy Joel tribute band. I realize that an agricultural fair is unlikely to host much in the way of entertainment that I'd be interested in, but that one staggered me. I can't understand why anyone would want to see Billy Joel. Why they would want to see a wan imitation ...

There I go again. As I said, I got to thinking about it. The other night shows included a tedious-looking ensemble that played covers of Queen, Led Zeppelin, The Who, ELO, Fleetwood Mac, and several other bands I'd try to hurt if I ever encountered them. I thought we were thirty years past yelling FREEBIRD! as a joke, never mind a serious request. I guess not. 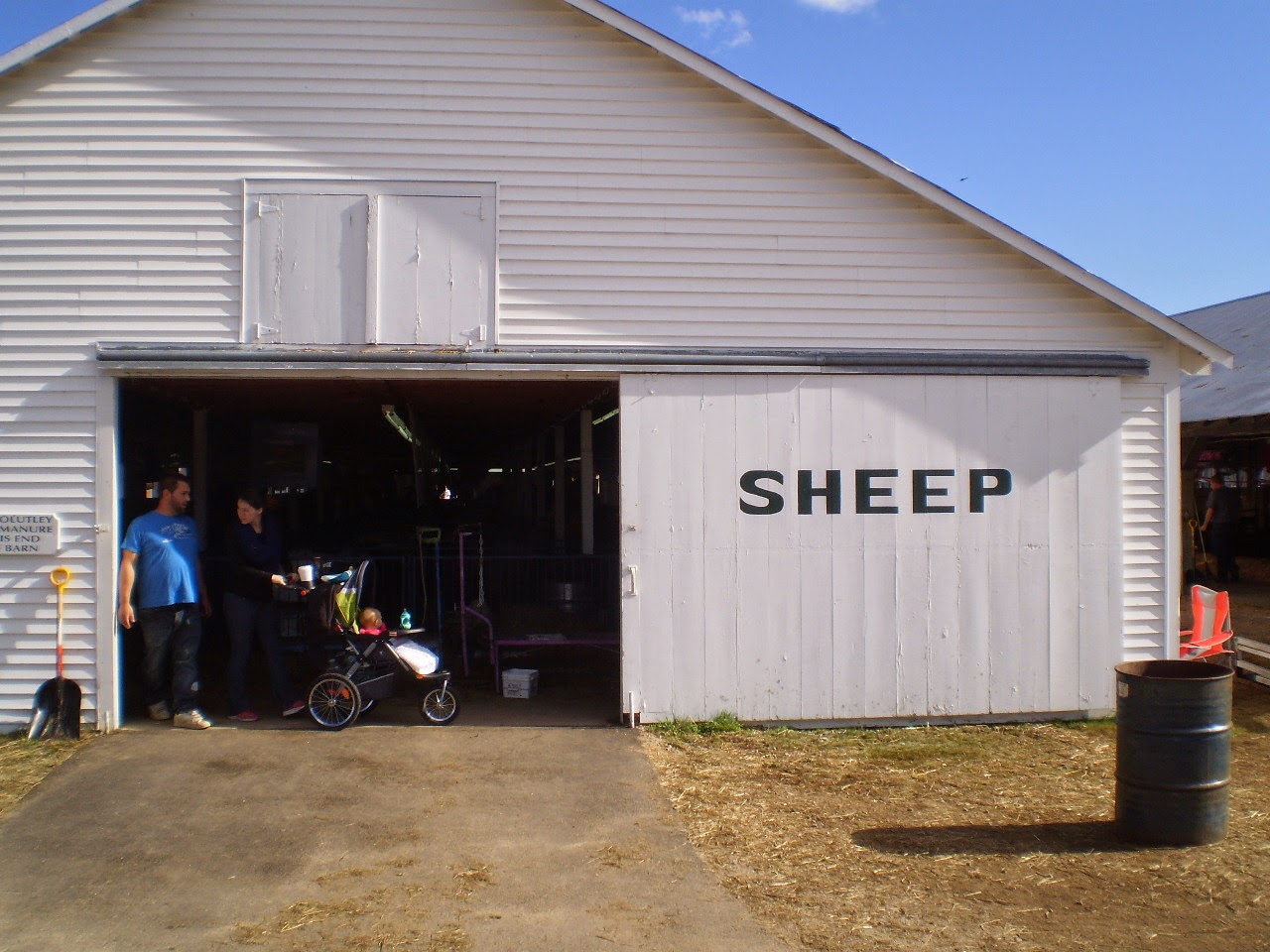 I think I'm beginning to understand it a little. It's garbage. All of it. It's garbage, and in their heart of hearts everyone knows it. That's why they get really angry if you mention it's garbage. The fanatic is so fanatical because in their heart they harbor a secret doubt. It's dangerous to spoil their artistic version of comfort food. They'll lash out like a rattlesnake that's been trod upon. If you tell me Mozart is garbage, I'll shrug and think to myself you're not very bright. If you tell a Metallica fan they aren't very good, they'll come at you with weapons.

A long time ago, I was in an upscale independent bookstore in North Dartmouth, Massachusetts. They managed to have very little of interest for me in there, which is a pretty difficult thing to accomplish, as I have very far-ranging interests indeed -- I'm the intellectual equivalent of a garbage can; you can toss in most anything. There was woman in line in front of me at the register. When it was her turn, she immediately became very agitated at the soi-disant  hipster intellectual behind the counter. She demanded to know where all the feng shui books were. The poor fellow behind the counter, who had the physical frame and fashion sense of a concentration camp parolee that had just gone to the piercing parlor and then raided a Goodwill box, looked visibly afraid of this woman. He pointed out that there was a whole section of feng shui books. A whole aisle of them, actually, which in a little store represented a significant portion of the whole floorplan, perhaps larger than any other topic. He asked her if there was a particular book that she was looking for that she couldn't find, and offered to order it for her if they didn't have it. She snapped at him. "I don't want a feng shui book! I just want to make sure you don't take them off the shelves and put something else there!" And then she stomped out, empty handed.

No one wants to hear Margaritaville. They just don't want to hear what might replace it.

[Note to my readers: A lot of the equipment being loaded into that van, and the back seat and the seat belts in the van, for that matter, were paid for by the generous contributions to our little PayPal tipjar in the right-hand column of this blog, and for which we are very, very grateful. If you'd like to support Unorganized Hancock, hit the tip jar, or link to their videos, hit the like buttons on their Facebook page, or tell a friend. Many thanks.]


[Update: Many thanks to Kathleen M. for her continuous generous support of my boy's efforts via the PayPal tip jar. Also, thanks to the Execupundit, The Adaptive Curmudgeon, and Maggies Farm for linking to my sons' videos. It's greatly appreciated]

[BTW, my Interfriend from Cow Hampshire, Amy Kane, has much better pictures of the Fryeburg Fair than I can offer.]

[Yet More Up-To-Date: Many thanks to David G. from Missouri for his very generous blast on the tipjar horn. It's greatly appreciated]
Posted by SippicanCottage at 2:56 PM

Email ThisBlogThis!Share to TwitterShare to FacebookShare to Pinterest
Labels: Bits of my life pulled out and flung on the Internet floor, Maine Family Robinson, Unorganized Hancock

Ok, funny you should say that, I was riding home with the dotter, who is somewhat musical, and some horrible song from the 80's came on and she started singing with it.

My comment: I always hated that song because I couldn't understand the words.

Her reply: Dad, they're not words, they're sounds that go with the tune.

Me: Well, it doesn't sound good when they sing the sounds.

Her: Well, it was before auto-tune and they can't sing. It sounds good when I do it.

I wonder if that isn't part of it. The autotune, and all the other tech tricks that are required to make most current pop music pop. I suspect there's a reason most shows by big names these days are filled with flashy choreography and over-the-top special effects: it's to distract the audience from the fact that the music is canned, because the performers can't perform and even if they could the music is mostly pure crap. Doesn't make for a good cover show, is my guess.

Oh - and well played, boys. The video was fun to watch, too. I know musicians who'd just jam everything in and hope it doesn't get banged around too much on the drive. You guys pack as well as you play.


This happens because we used to have radio and those songs were on that radio. They're canon. Radio split, so they're still here. They have no ride home.

Came in from the woodshed, eh?

You haven't missed anything.

What a great packing job! My brother used to just toss the drums into the back of the red/green van on the old steel floor and off we'd go. The van had been a Honeywell company van and it was bright green all the way around on top and bright red below. The neighbors called it the Christmas tree van. He now plays electronic drums because it's too loud to practice on the regular drums.

Missed you. Your lads are even more exceptional, you are even more grouchy, and I would love to see you have a go at Pete Townshend - he's probably the only one that's still scrappy. Just don't knock him down, he'll break a hip.

Hopefully by the time I get to see the lads they will be playing the Liverpool empire or Wembley?

Ha, ha, ha...you sound just like a typical baby boomer!!! I can just hear the next phrase; "why when I was young..." Get a grip buddy! When you understand how condescending you sound then maybe you will be on the road to acceptance of others.
Steve

Do you have enough barbed wire to keep the girls away from those two handsome boys?

Listening to some old classic rock song at home might be comfort food.
Hearing some marginally talented band slog through covers of the same for the umpteenth time is junk food.

Well, at any rate, it's nice to see a Metallica fan out on bail and gracing our comment section with pithy insights like that.

I'm becoming a recluse. An insane and hostile one.

I walk into a bar or restaurant and stand there and listen while the hostess looks at me like I'm crazy, which perhaps I am. Then, 90% of the time, I respond to her by saying that no, she can't seat me because the muzak is too vile and too loud.

I am forced to use grocery stores, Home Depot et al and shopping malls, but it's torture. I complain when I can.

When placed on hold, if I get muzak, I hang up, call back and insist on leaving a message. When they actually reach me I tell them they have three choices - kill the muzak, always phone me ( I will not return calls to these cretins) or deal by email, or lose me as a customer.

Either my selective hearing is much better than I realized, or the grocery stores and Home Depots that I go to have never played any music. That's more of a department store annoyance.

This Minor Swing is a major hit with me. Best of UH so far IMHO. By the way, doesn't the heir have an awesome set of finger calluses by now? Saw him shaking his fingers at the end like I do after a short practice session, but I don't practice enough to have calluses.

Not too many Django cover bands around, are there? The heir and the spare have developed musical competence well beyond their years.