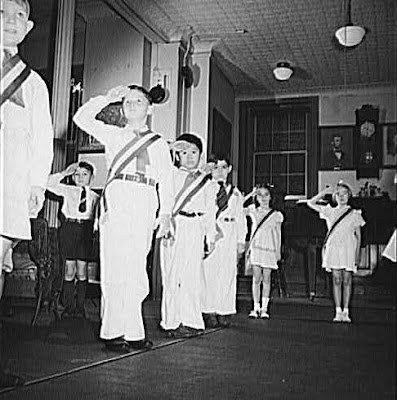 I remember Columbus Day because I used to play music in a hundred and one bands anyone that would have me and try to make money to eat and get cigarettes and I don't smoke and there still was never enough money and I played at a tee-totaling biker association party for two members' wedding not gay a man and a woman that arrived on a motorcycle with the woman I think wearing a white Wedding Dress and no helmet and we played for one hundred sober bikers and ninety-nine of them were like accountants and one was like a serial murderer but they all looked exactly the same so you had to assume they all would kill you if they got the chance instead of the more likely thing that they'd do your taxes if you asked nice and I never played Born To Be Wild for a Wedding Song before and the bride's father was in jail I think so she had to dance with the groom twice and the whole thing was held at the Italian-American Club on Gano Street in Providence but everybody calls it Guano Street for a joke haha and it's a real long time ago but it might have been the Portuguese-American Club I don't remember but I do remember it was Columbus Day and I went into the bar to get away from the sober biker accountants and that one serial murderer that were in the function room and it didn't matter if it was the Italian-American Club or the Portuguese-American Club or the Knights Of Columbus Hall haha that would be funny but I don't really remember but I distinctly remember a guy with a knife a real knife not a just a knife a dagger that came to a perfect point and didn't fold or look like you could do anything wholesome with it it just looked one hundred percent like it was designed and made to gut a bass player and that guy held that knife right under my chin and explained to me in Portuguese that Cristobal Colon was Portuguese and don't you forget it and my Spanish was very sketchy and Portuguese sounds like Russian to me not Spanish anyway but believe me I understood every damn word he said and I advise you all to answer the question did you know Cristobal Colon was Portuguese in the affirmative at all times.

The end.
Posted by SippicanCottage at 10:33 AM

Well, that's easy for you to say.

I read that all in one breath. About passed out. I couldn't ask for a better start to a Monday.

Meg and I are reading, The World of Columbus and Sons, by Genevieve Foster just now. I think I could answer the questions right, should I find myself held at knife point.

I remember it b/c of a Bugs Bunny cartoon. That wacky rabbit knew his history.