I Knew It All Along 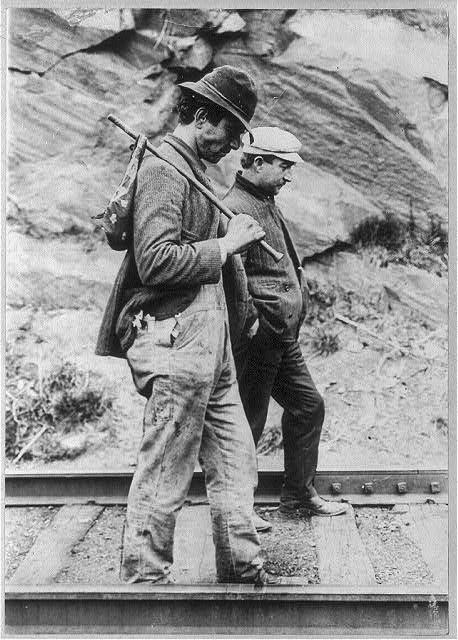 "Charlie I been thinking. I shouldn't but I do. I get to brooding on a thing and then it gets hold of me and worries me to no end until I think it all the way through. We put one foot in front of the other but we never arrive noplace. How can that be? The train, he runs from point A to point B and that's that, unless the boiler gives out. There's a bill on the wall in the depot, and it stakes its reputation about the comings and goings of the world and generally turns yellow before it misses. But we never arrive where we're going even if we hop the train. It doesn't seem possible but there it is.

"When we walk along the ties we fall into an easy rhythm, don't we Charlie? There's nothing else a man can do. You know I'm right in this, Charlie, it's plain. You remember when you was just an angelina the ties would break your step and confound you and you'd try every kind of thing to beat them at their own game. You'd walk along the edges of the railbed and get poison ivy real good, or find a bramble, or step in a chuckhole, and pruddy soon you'd find yourself back on the ties and counting the anchor plates for amusement, now wouldn't you? If we had minders we couldn't be herded any closer. They cut the railbed through the wilderness and it's the only way from here to there and a man knows it for a fact if he's not a fool. But we never arrive at anywhere we need to go, do we, Charlie? The rail is laid for another man's trip but that's all there is.

"When I was little they took me to the church, Charlie. It was the plain church with no Romans, but I can't remember the name. The only sign that it was a church, besides how hard the seat felt, was the cross marked on the wall as plainly as the chalk on the curb outside a kind lady's house, the kind that talks religion and gives food. But they never gave me nothing. Then a feller that looked like reform school got up and took out his watch and set it on a little desk next to a book he never looked at once and started thundering about this and that. He looked me straight in the face and said in our occupations we spread our nets but God brings the fish. I don't know why he looked at me like that when he said it but he did. He put that sentence on my mind like a mark on cattle and I never forgot it. I didn't know what it means but it stayed with me.

"I think he meant to tell me that if you got fish in your net then God almighty himself put them there. And I guess that means if you haven't got no fish that you don't deserve any. I know upon reflection that was a hard thing to say to the face of boy that hadn't seen breakfast. Having fish God gave you with his own hand seems to come mighty easy to those with nothing but ink from a bill of sale for the net on their bony fingers, don't it?

"I've been turning it over and over in my mind, Charlie, and I think I had it all backwards. We live in a world where you never arrive no matter how many steps you take. Your destination is never posted in the depot and if you say you'll go along to another then you find you're in the wrong place every time, and have to start over again and again.

"I been looking at the nets and the fisherman and I've seen the fish on the plate through the window when I'm standing on the sidewalk, Charlie. I don't know anything except that the fish is never on my plate, Charlie. And I'm beginning to think that the loud feller with the stern face was telling me the opposite of the truth, and doing it on purpose. That's why he made it hurt. That's why he left a mark. To keep me rubbing it over and over like a tender spot but not looking at it for fear of it. Like when your tooth is gone you put your tongue in the spot it where it belongs over and over but you never want to see it in the mirror because no man wants to know he's ugly.

"I'm beginning to see that we're walking in a world where fish on your plate is a sign that the Devil himself knitted your net. No one has nothing they deserve, Charlie. If you got it, you got it in some underhanded way. Money is the mark of the Devil in this world. What do you think of that, Charlie?"

"I never went to church so I knew it all along."
Posted by SippicanCottage at 2:15 PM

Email ThisBlogThis!Share to TwitterShare to FacebookShare to Pinterest
Labels: a boot stomping on a human face forever, flash fiction

Life's that way. I'd buy you a beer, but don't know what kind you'd like. Maybe a Narragansett?

Angelina is a baby girl. Angelino is a boy

Honestly, I don't know why I even bother anymore.

Botheration! Mr. Sippi, you are GOOD at it. Pretty dang soon, you'll hit your stride, and won't NOBODY catch up to you.

Too early for Black Dog, old boy. How's your firewood? I've only collected 1.5 cord so far, but it was all from Craigslist free section. Competition for the stuff is already getting tough, and this is Raleigh!

Sip, you must know this by now. You can't let em beat you no matter how empty your net. Ask my Dad. He'll tell you. You just can't ever quit, otherwise, they win. My Dad has no quit in him whatsoever. Wish I had a little less...

Sippi, I luv ya, man! I hope its not my comment about baby girls that upset you. Its just weird to read where a man says, "When I was a little girl..."

chasmatic said...
This comment has been removed by the author.
10:50 AM

My uncle's name was Louie Lozko. We all called him "Letsgo Lozko". He raised bantam chickens. He told me one time "Chickens are easier to raise than fish, and easier to catch, too." I've never forgotten that.

(I hadda repost it. My spill chuck wasn't working write at awl.)

Anonymous said...
This comment has been removed by a blog administrator.
4:28 PM

Maybe it's me, being the last of eight kids, never having had the natural right to learn something on my own before some older sibling had "been there-done that" and simply had to explain answers to questions I never asked, so I kept my curiosities to myself.

The Internet is like that, too, full of older brothers just waiting to tell you what you don't know.

So, it probably is just me, but when I find an engaging story under an interesting photo and, like any angelina, I stumble over a word or phrase that looked like it didn't belong, or like it was misspelled, I assume one of us is wrong. When everything else is brilliant, it must be me that's missing something. I keep my curiosity on the down low, because I ain't gonna give 'em the satisfaction of telling me.

Ol' Sip is an easy mark for the wandering story collector. I stop by here and fill up my bindle stick.

Sip, don't even THINK about taking too long of a break here or I'll come up to Maine and personally give you the old man's beat-down. You know, throw bags of prunes at you while I pipe random, seriously bad 80s music in the background and generally taunt you for being far too good at Trivial Pursuit. It'll be a total Flock of Seagulls kind of rogering and I'm not joking, Mister. Back at it!

Dave, you might oughta think about adding some ABBA to that.

How we miss you!

Sipp, I could tell you a story of a man that saw the teeth of the beast up close. And yep, it was as dark as pitch in there, just like you've heard of. Been there and back and you know what? You still have to get up and fight it because the alternative is certainly no better.

I'm just another one of your fans, waiting for your next story. Please.
OK TIRED OF WAITING! haha
faster, faster, you know you want to

I've played all my Fleetwood Mac albums a hunnert times and Neil Diamond too. Waiting is not my forte, or as they say where I come from, my thing. I'm getting down to The Carpenters, so do hurry, old son.

Life's a posy bitch in this cruel world of have and have not, Sipp.

My only advice is to start voting in favor of your best interests rather than pointless philosophical principles.

Best to you my dear.

Well, you an' Charlie both may have a point or so there...but...

Myself, I always try to keep in mind what a fairly smart fella once told me, as it seems to help a bit, especially when the road seems long and maybe kinda steep, with the destination not too certain.

He said to me, "Well - it's not really about the arriving, nearly so much as it's about the journey itself, y'see."

I really kind of hope he was right - it does seem at least possible, anyhow, and sorta helps the miles go by.