That Boy Is The One 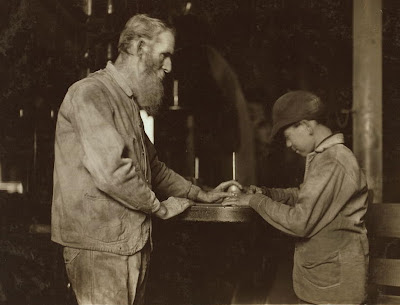 He just sort of appeared there. I never saw any motion; any coming or going.

I must admit, he shook me a little. He was sitting in the pouting chair. That's what we called the battered settle by the door where we'd sit and smoke and think a bit about what we were doing. Collect your thoughts.

"When in doubt, sweep the floor," my boss would say. I didn't understand that fully, then. I thought I was his inferior, and it was all I was good for. But I'd see him doing it, so that couldn't be it. Even one as dumb as me understood after a while. He was up against it, somehow. Joint wouldn't pull tight. Glue pot gone cold unexpectedly. A dull blade splintering an edge. Something. He'd sweep like an automaton, and I'd see him turning it over in his mind. Then I understood.

The boss was worms and forgotten. The pouting chair was my place to sort it out. The sun would sneak in the door, open a crack; the sheriff of a breeze would evict my smoke after a while; and I watched the motes of dust drifting through the beam like krill in the sea. The grain ran out. The board had a shake. The wane would rob two inches off the sound edge. Something. It would always come to you --what to do-- in the chair.

God, that little round face there in the chair. He couldn't be more than ten. Strike that. The little heathens in the street always looked years younger than they were. They might be a race of giants sent by our Creator to rule over us all, but who would know? They'd never eaten two meals in the same day.

He sat there all day and said nothing. He didn't even sniffle. It was as if we had a bargain, unsaid; he didn't move and I pretended not to notice him. I'd pull off a prodigious curl with jack plane, and wonder if he saw it. Can he pay attention at all? I couldn't look at him, it would ruin it.

He sat there for four hours, and never moved or spoke. When I got there the next day, he was sitting there again. That boy. That boy is the one.

[Note: I wrote this seven years ago, and didn't publish it for some very good reason, I'll just bet]
Posted by SippicanCottage at 10:32 AM

Hand him a broom.

Might fine curl you just planed, Mr. Sippi! Might fine; exactly one full circle of a curl.