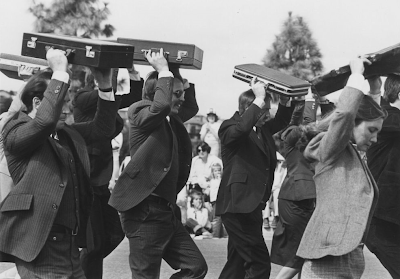 Great thinkers come to the fore when they are required. The founding of any great enterprise requires inspiration coupled to intellect. If the intellect is wanting, the inspiration is usually enough, but makes it harder to carry out the fruits of your inspiration except by dogged determination. Intellect alone is not useless -- it's worse than useless. On a good day it's counterproductive; the other 364 days it's destructive. You cannot come up with a worthwhile concept based solely on intellect. It qualifies you only to be a clerk or a sophist. Clerking is hard work, so everybody goes full sophist right away.

Now the world is run by sophists. They think that because they read a few books about people who were great that they are great in their turn. There are two problems with this surmise. One, the people they think were great probably weren't. Secondly, most people are incapable of much more than misremembering and misunderstanding the twaddle they read anyway, because education isn't very rigorous anymore. If you think the world's business is decided by simply choosing wisely between John Galt and Noam Chomsky, I don't know what to say to you. Mozart is never going to show up on American Idol.

I'll answer the question I posed in the opening myself. The reason Hamilton and Madison et. al. sat at the same table once is that it was required just then. There was an enormous market for ideas in the rough, right away. A few years later, the time for thinking like that was over. Old Muttonhead rightly sat at the head of the table and told Jefferson and Hamilton to put a sock in it, and see if they could manage to keep the spittoons emptied in their assigned offices before they got any more bright ideas. We could use some of the Old Muttonhead approach right now.

I read the news in the most desultory fashion because it's so useless to read twaddle filtered through incoherence and basted with a faction reduction. I hear, literally, gibberish. There is no such thing as a "toxic asset," for instance. An asset is pass/fail. It either is, or it's not. A banker prone to adjectives isn't much of a banker. There's that sophistry again. To hear a person with their hand on the levers of vital things utter such bosh indicates to me that the people that formerly put stupid back-seat-driver bright ideas in the suggestion box at their crummy jobs thrice daily are in charge of important things now.

What possible good could it do to read a paper that refers to a capital injection into the money supply and a transfer payment to non-productive sectors referred to interchangeably as "a bailout." It used to be only the journalist that was that ignorant. When the people the journalists are interviewing start talking like that, why listen at all?

It's an honorable profession, being a clerk. I spend part of my day being one. You intellectual swells should try dabbling in it. To paraphrase Randle Patrick McMurphy: Sell big ideas someplace else; we're all stocked up here.
Posted by SippicanCottage at 9:39 AM

I'd say more but that would make me a bit of a sophist.

Man cannot be content with mere truth, for which reason he tosses it aside like another worthless bauble in his delusional search for an end to searching.

Academia is no different than any other industry, which comes out with new models and fashions even though there's nothing wrong with the existing ones.

The most important conditions of existence do not change, nor does the nature of man. To know these is wisdom. But it's a sad and sobering wisdom, so man prefers his intellectual flights on wings of abstraction, free from the gravity of concrete reality.

"Intellect alone is not useless -- it's worse than useless."

That's why I come here. I'm am smarter, now. Thank you.

if I knew what trenchant meant

It refers to trenches, to wit: long, narrow holes in the ground. Yeah, I went to a public school. Why do you ask?