The Violet Days Are Here (A Month Early) 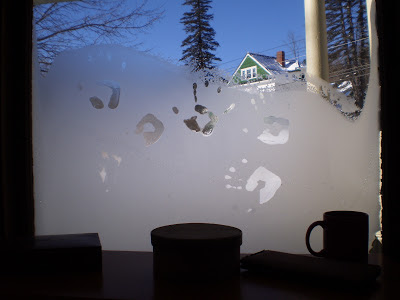 [Note: I started writing this essay all over again until I realized I'd already written it last winter. The forecast starting Monday is for twenty degrees below normal, and normal ain't normal to a normal person]

It's ten degrees, but it won't last. The sun is retreating and dragging the thermometer with it. The violet days are here.

There was a moment before sunset when the sky and the earth and everything in, on, and between them turned this lovely purple hue. It's an indescribable color. Light through a lens fashioned from a limpid pool, frozen. It can't mean anything but cold to my eye. I don't know how many bedrooms I've seen painted this color. It's arctic looking, and the person that chose it always told me it was, you know " a warm color." Yes, it is, in the same way a walrus butthole planted on a floe is warm. To a lunatic, it might be warm.

But cold as a concept is not as bad as many make it. It is a fact, here. It will be below zero, day and night, for three days in a row. It will be ten, fifteen, maybe push twenty below zero at night. Winter is not fooling around anymore. So what.

Winter is a full time job in Maine, E. B. White said. But he lived Downeast, where it's warm compared to here. But he understood. You have to look it straight in the face, and deal with it. You can't go out in your socks and scrape the frost from your windshield with a credit card. I've made over 500 fires already, and I've only used one match, once, to do it. You have to prepare yourself for winter. It reminds you that you're mortal, and that there are seasons, and those seasons have meaning. It shows you that your life will pass you by if you're not careful. Winter is useful that way.

I see a great number of people talking about how they're going to deal with a coming apocalypse. They're going to hoard this and grow that. They're going to be the Omega Man crossed with Johnny Appleseed. Forgive me, but life is plenty hard here, and I can't help but notice you're not moving in next door to me before the apocalypse. I doubt you will the day after. If winter is too much for you, I doubt you're prepared for an army of zombie Robespierres or whatever it is you're planning for.

I can't say I like the winter. I've always been cold. Poor people are often cold, and I have been poor in my life. I'm not a fool and I don't like misery. But I respect the winter here. It's a worthy adversary, and so, goddamn it, am I. Bring it on.
Posted by SippicanCottage at 9:25 AM

Yes, it is, in the same way a walrus butthole planted on a floe is warm. To a lunatic, it might be warm.

If I ever decide to paint my walls, I'll have to keep that shade in mind. There are parts of my house that would be a lot more comfortable with such a cool. Might save my some on my air conditioning bill...

You definitely need to move to Northern Maine, though I do admit, the mountains of Western Maine are plenty cold. Forecast is for 30 to 40 below zero starting Wed. I just hope the wind doesn't blow. We have about 3 feet of snow, thank God - it does tend to insulate the ground and around the foundations of the houses. If the wind starts blowing though it's going to be bad.

Please clarify Viot. My guess is either Voice Index on Tap or Village Idiot on Tour.

An army of zombie Robespierres? Just the French on that is enough to give me the shivers. Part of me hopes the apocalypse never arrives.

Goose down, my friend. Goose down has become your new best friend. And fire wood. Forget about violet blue and purple being temperatures - those are abstract ideas and best left to lunatics other than us.

Last night I invited my husband to sit on the deck with me and watch the neighborhood fireworks. He declined, and said it was too cold. It was 49 degrees.

I have lived thru North Dakota winters, not far from the Canadian border. "Right coolish" is an inapt description thereof.

Now Sippi, you know we love ya but we dang sure aint going way up north in the winter time. Down here in the deep South, the living is easy and often it never gets down to freezing temperatures all winter. We know that yankees talk bad about Southerners but you've never heard of anyone retiring and moving north.

I grew up in southern Minnesota in the 50's and the winters were quite meaningful. We would commonly have weeks at a time when the temp never rose above zero. -20F was common and the coldest I ever saw was -40F. The nice thing about these low temps was that they usually only occurred on a clear night with no wind. The air was beautifully still and crisp. My father, who grew up in northern Minnesota and North Dakota, remembered seeing -60F as his coldest.

Anonymous @ 8:22 PM:
We know that yankees talk bad about Southerners but you've never heard of anyone retiring and moving north.

The parents of one of my brother's childhood friends retired northward to Vermont. From cold to colder.

Which is admittedly not common.

That is the funniest comment I've read in the last fortnight.


I spent 12 winters in New Hampshire.
When they say "how much snow will we get tomorrow" and they say 5, it's not inches. It's feet !

Look, we knows youse a nice fella, cool even, but you see - here's the thing -

Maine is not escape to, but from. One would only hope to avoid a zombie apocalypse there if assured - beyond a shadow of doubt - that zombies would freeze into a zombiesycle in winter, or run in terror from black flies 'n skeeters in the warmer part of winter.

And frankly, that assurance has not been forthcoming. No, not at all.

Cain't we be neighbors somers else?

Well, as they say one picture is worth a ...hurumpf.

Believe it if you want to, I wouldn't.

Time to change the battery on the digital outside temperature gauge, alkaline batteries don't work well below 10 degrees. Lithium does the trick.

I love the colors displayed in winter -- they're so vibrant.

When I see a cardinal in winter, I'm especially reminded of how God knew what he was doing. :-)

We love the sunsets and sunrises this time of year. The other morning down here in Georgia when it was 0 degrees, the sunrise was spectacular.

BTW: You always make me laugh.