[If you just came in, I'm explaining how to repair a 110-year-old ramshackle house. I've gotten as far as my baby pictures. Hang in there]

And so in your hearts you beseech me to lay down my cudgels and finally put lintel atop column or wiggle my spud in some girder holes --something-- but I find the need to weave wattle for my mind's pigpen just outside the jobsite again.

I describe a thing to bring a laugh but it's not a laughing matter. I'm throwing rice at a funeral. In Massachusetts they examined me to see if  I was worthy to stack one block upon another, to let a dog, or a dog's minder, get in out of the rain, and they did it in a place that should be taken apart to its component molecules, the bits burned to ashes and smeared on the faces of its patrons and architects, the very ground it squats on like a concrete animal salted to make a Carthaginian blush and a Roman envious. UMASS Dartmouth is the worst place man made. A penance is in order.

They say a bad surgeon buries his mistakes, but a bad architect can only advise his clients to plant vines. UMASS Dartmouth should plant poison ivy over every inch of it. It's not landscaping. It's a warning to the unwary. You think I'm joking? This is what it looks like: 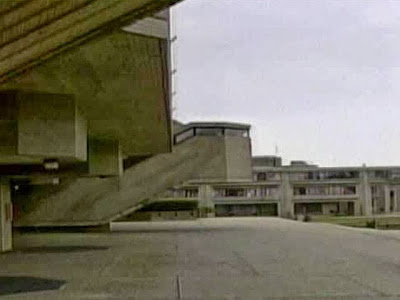 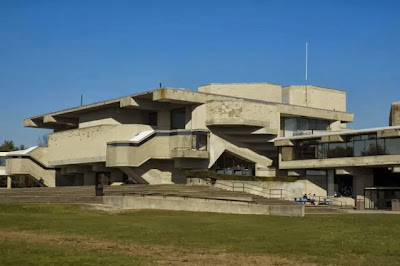 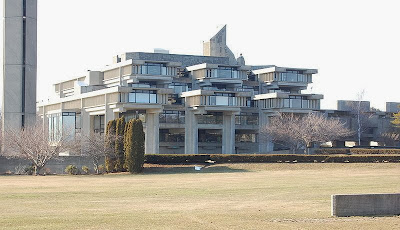 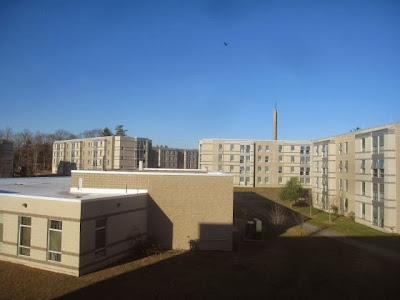 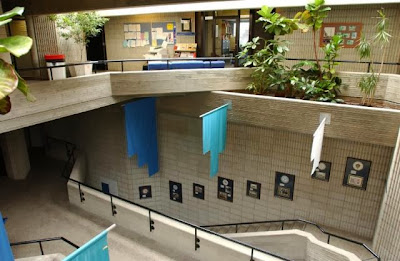 You could dig up whatever bits of Dante Alighieri you could find and plop him at a table and press the quill in his bony hand and say, "Top that, you piker," and he wouldn't hesitate a moment, just say he couldn't raise and dare not call, and throw in.

It's not a prison. A prison acknowledges the essential humanity of its occupants by trying to thwart their normal urges. It knows what you want, and tries to take it away from you, because you want to live like a human being, at least the kind of human being that goes to prison; but UMASS Dartmouth doesn't like anything to do with human beings. It is worse than the most devilish panopticon, because every nook and cranny of it is designed to make you repudiate your own humanity. It wishes to deny the existence of humanity itself. If there were corpses hanging from those gibbets with the featureless rags hanging from them in the last picture, it would improve the mood, I think. A corpse used to be a human, after all.

So what does a place that denies the essential essence of humanity produce? What is the end product of a nursery of inhumanity like this concrete dovecote? This: 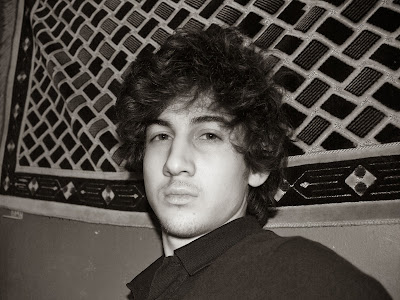 So it's the weekend, and I'm at UMASS Dartmouth, in the back row of a grim, semicircular intellectual arena, where on weekdays good ideas are slaughtered by intellectual kittens, no lions being available, for the amusement of sleeping students; but today it's jampacked with people who want to be general contractors. Everyone has already had fourteen cups of coffee, and the room vibrates a bit with it.

As God as my witness, there was no cheating. Everyone would have cheated, I suppose, but it's not possible to cheat. You are allowed -- strike that -- you're required to bring the answers with you. The whole test simply asks you to look things up in that big, powder blue looseleaf foolscap mess they call the building code, and write it down when you find it on the line that is dotted.

As we began, the opening shuffle of papers sounding like the emptying of a dumpster, it dawned on me why everyone attended those classes at the stripmall I mentioned before. Every single one of those classes taught nothing. No one knew anything more at the end than at the beginning. All they did, was to teach the students how to take apart the big, blue book of statutes about building structures, and put it in a different order, one that made a kind of sense: foundation before framing before plaster before skylights and so on. Then they gave their students fifty cents-worth of color-coded binder tabs to tell one section from another, and locate things faster.

It was a long time ago, and one forgets things, but I remember distinctly that each and every person in that room filled with hundreds of people had those color coded tabs on their books -- except one person, of course. I began to feel as though I was being looked at by every single person in a very large crowd, which is fine if you're tap-dancing or singing barbershop or whatever, but is very unsettling if you're just another schlub in the room. Oh, what ideas you can conjure about other people that are staring at you. That guy is either much smarter than we are, or very, very much dumber.

I'll leave it to you to decide which was which and who was who. But me, I was in for another shock. The test lasted for two hours, if memory serves, and I dutifully remembered the nuns, and tried to ace that bad boy, and finish first. I plunged headlong into figuring snowloads that would make a ski area blush, and figuring out how to nail off a corner post to withstand a temblor that doesn't show its face much in New England that I've noticed. I flipped furiously back in forth in that big, bad, book, and looked up what needed looking up, and read it, and puked it back up in a cloud of number two pencil lead.

An hour and fifteen minutes in, people started to get up and hand in their papers, while I was still laboring at span charts and live loads and occupancies for a theoretical bowling alley that was being converted to a ballroom for paraplegic arsonists, or some sort of arcane building use that made the rules go topsy-turvy. After a few minutes, the trickle of people leaving became a steady stream. The ghost of parochial schools past appeared at my shoulder rattling their beads like some weird Sister Jacob Marley, the face of the big industrial clock turning to a judge with a black cap, and I thought of my hubris, and the little plastic color-coded tabs, and ended up using every last minute of the allotted time, while wishing for more.

The Commonwealth of Massachusetts will not tell you what your score is on such a test. They will not tell you anyone else's score, either. That would smack of a meritocracy based on, well, merit, and we can't have that. They mail you something a month later that bluntly tells you if you passed or failed, and that's it. And that's where I discovered the big secret.

(to be continued)
Posted by SippicanCottage at 2:36 PM

Email ThisBlogThis!Share to TwitterShare to FacebookShare to Pinterest
Labels: fixing the basement

...but ugly goes clear to the rebar.

I tend to read fairly fast, and I was always a good test taker. I remember enjoying the spectacle of muffled swearing and audible gasps, when I would get up and turn in my college tests first.

You are right, that school looks like a reject from the soviet housing authority.

Big Secret... it doesn't matter what your score is, as long as you pass??

One thing about them Portugee, they know cement.

Nicely done, the use of Dartmouth's Brutalist architecture to make a salient point about the old bootheel(and that young sh#theel).
Then - boom, right into the narrative tone - good stuff!

Now, was there something about a basement?

I worked in a brutalist building. A medical clinic. Looked like a prison, and it became one.

Lifeless, nihilistic containers for humans, the brutalist style makes brutal people.
Why would that be a surprise?

Where did they hide the razor wire?

Dang! Photos of the Home of the Cylons!

That style of architecture looks very familiar, and bomb worthy; that's how they built the library at my school. Not so big, since they had less money. Basically, they change the style of architecture every time they build a new building, a la granite counter tops. Except they don't tear out the old stuff (even if it does look awful), because they don't have THAT much money. So the whole campus is a glorious display of "this is what the Home Depot Architect sold us THIS decade".

It would come to no surprise to you that I pick which building I study in by where I can find the most natural light. It would probably also come as no surprise to you that, after building ceilings a gabazillion feet high, with floor-to-ceiling widows facing the wrong direction (e.g. not south, and for some reason it gets cold by those windows), the architect then told them they could put desks and chairs in front of said windows, because it would spoil the view. They put in a few "stylish" chairs so we can look stylish in front of the windows, but I spoil the picture with balancing papers and books and laptops and calculators and writing utensils all over the cool chairs. Leave it to a student trying to learn to ruin a good view.

. . .said that they could NOT put desks and chairs in front of the window. . .

. . .corrects the ninny who forgot to proof-read her work before hitting send.

Oh my word. That's horrible. It's like a Destructicon (TM) ate a cement factory and crapped out a college campus.