I Think I'm Supposed To Pony Up Before And After Photos

But I've already shown you before and after photos. You just weren't paying attention. It's not your fault. I'm weird and broke, so my After photos are really all During photos. There is nothing permanent in your house. Your house is a direction, or more accurately, it's one of two directions. Getting better or getting worse. There is no stasis in houses. Nothing is "modern," or "updated." Newly installed, maybe. But the hideous stuff you ripped out, usually barely a decade old, was all modern and updated when they put it in, too. What it really was, was a fad.

Fads rule in everything in American public life. There used to be fewer choices for everything you used or owned. There were only three TV channels when I was young, and yet people had a more varied outlook than they do now, even though basic cable has three hundred. Everyone had to have Corian counters when Clinton was President. Everyone had to have granite counters when Bush was President. Everyone wants repossessed granite countertops in Obama's second term, which is almost continuity, but my point stands. In two years every one will sniff at your granite and say quartz is where it's at, dahling, and you'll tear it all out again.

I didn't do anything in particular to my $25,000 house, though I'm always doing something. A Home Depot brochure didn't explode in there. I really only did one thing: I reversed its direction. The period before 1968 is shrouded in mystery, but I know pretty much what's been going on here since then. It was all bad. Everyone had their own version of  bad to visit on the sticks and bricks, but like most people, they were all human termites. They ate at the fabric of the house, and pooped in it. The poop of a human termite isn't sawdust. It's ceiling fans and wallpaper borders and sheets of paneling and dozens of tin barnacles on the window headers for curtain rods and shutters and shades and drapes and sheets of plastic and venetian blinds.  I began to suspect that this house has only had one direction since it was built, and then, in a moment of inspiration, looking at some substandard thing or another, I wondered if it was going down the shitter even before it was finished. Did the original occupants move in before it was completely built and start the cavalcade of entropy before the paint was even dry?

It's very likely. The house was built in a very unusual way for 1901. It's timber framed. The outside is standard-issue Queen Anne, with wrap-around porch, a curved and a turreted roof, a mix of siding textures, big windows, public rooms enfilade. But it's framed like a barn: big timbers socketed into one another, and not enough framing between them. I would have expected balloon framing, maybe, and there is some mixed in, but this house wasn't a palace, ever. It was for regular folks, or the just slightly better off than regular folks, and it was built by people that were used to having horses for customers. It's a testament to their innate good sense and the quality of even below-average building materials and methods from the turn of the twentieth century that the house is still standing after a century of people trying to wreck it.

When we moved here, I think I spent over two hundred dollars on window glass. Window glass is cheap. If I gave you a bag of baseballs and a half an hour, I doubt you could break two hundred dollars-worth of window glass. But when the direction of a house is south for a century, all sorts of tabs can be rung up. All I did was stop this Lusitania of linoleum and turn it around. I try not to make anything worse, and if my wife and I ever lay our hands on twenty-five dollars and thirty minutes, we can improve our lives in a demonstrable way, just by pushing the shingled rock up the entropy hill one more inch.

So here's a picture of our dreary living room, leading into our shabby dining room, just as we found it, replete with a moronic ceiling fan where a light should be, purchased with money that might have fixed -- oh, I don't know, a broken window-- in a room that faces north in a climate that has shown me twenty below zero in recent memory: 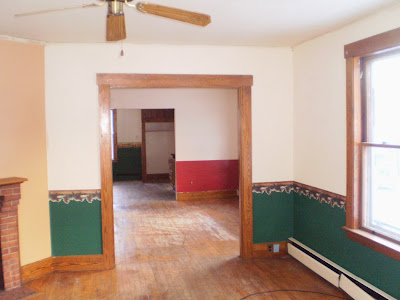 But you've all already seen the After, er, I mean During photo. It's a video, though. The Heir and The Spare are in it:

Remodel your house in the only meaningful way possible. Turn that ship around. Turn that frown upside down. Find a mate and have some kids and put some life back in your house. But Just between you and me, I'd skip the trombone. It's like brass bagpipes.

(You can see more Unorganized Hancock videos here. The drummer's only nine years old in that video. He's ten now, and a lot better. No, really)

(to be continued)
Posted by SippicanCottage at 1:58 PM

Actually, I think you're supposed to "cowboy up". Don't seem right for Maine, but whatcha gonna do?

Those painted hedrons are like great war dazzle camo, you were not supposed to notice the tatter.

Trombones are good. Better than, say, the soprano saxophone. And the light fixture in your dining room (library?) is very lovely.

Sip,
I know you trashed the ceiling fans, but what material(s) did you use for the counter tops??

Who fixes their broken windows anymore? First, everything is double or triple pane and the spaces in-between the sheets are filled with dessicated argon, or maybe that is supposed to be Nitrogen.
But in the old days, single pane windows and exterior storm windows. I did all the windows in my old house (the burnt down one); first fixing the broken panes which were either half sheet or eighth individual pane. Then affixed the first storm windows that the old shack had ever had.

Donie complained that when I finished the house smelled "flat". I had her step outside and take a breath, "That's what the living room used to smell like!" she exclaimed. So I went down to the hardware store and bought a can of air freshener in "Alpine Meadow". I sprayed that stuff around and she could enjoy the atmosphere of being outside, but with heat.

And that band? That drummer has a groove. Freakin' awesome. I can dig their jazz. Moar pleez...

Dang. I've been writing my own blog about my home-restoration struggles for several years now, and you said in one post more basic truths about the activity than I have in all of mine.

Wow I don't visit for a couple of days and a lot of catching up on your posts to read :)

You would enjoy a bit of archeological joinery at my place. I am not certain of its age, I have a deed from 1890 but I can see a house here from maps dated 1850 and possibly 1780. The letter slot in the front door is obviously not original which hints that it is pre 1850. There are I think 5 sets of wiring on top of the iron pipes for gas lighting. The sheathing for the wiring runs: metal, rubber, PVC in two different colour standards.
When I first came to live here the simplest change, "I want to fix a light fitting" ended up with structural work and things like digging a trench to replace the lead water main.
Sadly the previous 'improvers' got rid of the original window shutters and fireplaces.

Still you can feel happy to get a house which is habitable for $25k, that probably would not pay your rent for the year here in London. Lowest rents around here are around £1200pcm for a 3 bed apartment and this is not a fancy area. That rent doesn't include property tax either, add around 10%.