First Comes The Concrete Leper Colony. Then The Framing 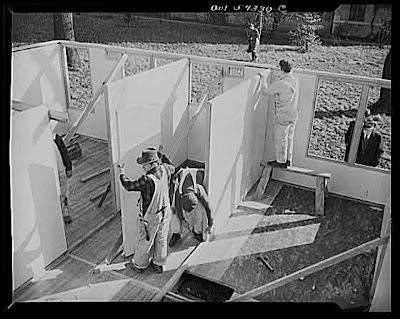 [If you just came in, I'm describing the process for fixing the ramshackle house where I currently live in Maine. Just like all actual repair work, I lied to get the job, and it's taking way longer than the estimate. The Shirk Brothers in The Money Pit are not really fictional. I'll get to the point in two weeks! I promise]

You might expect the published rules for building a house to resemble some form of instruction book. You'd expect wrong.

This is what it looks like. (it's a pdf)

That's just an addendum or notification or supplement or appendix or amendment or notification of pending imminent continuing forthcoming wonderfulness. The actual body of the code is much less straightforward and succinct, and it's six inches thick. There's a delightful entry among the gobbletygook atop page two on the linked pdf -- don't miss it, it's a howler. It asks for an estimate of the fiscal impact of changing and adding a bunch of laws about building every sort of structure in a whole state, and it just says "None." They double down by asking about any effects on small businesses, and they aver once again, "none." I guess the rubber stamp that reads: Who Gives A Sh*t was sent back to the print shop to be resoled from overuse, and they had to settle for the None version.

The "CMR" on all such pages stands for Code of Massachusetts Regulations. That's right, you're reading legislation if you want to build a house, or more precisely: statutes.The Building Code is part of this CMR, and it's mired in Dogeared Dewey Decimal Land in the 700s. If you're curious about whether politicians have decided to cast their laser-like focus on whether gasoline-soaked foam rubber makes good wallpaper in a nightclub, you can look at the amendment of the section about what kind of chair rail  you can use in your basement in a flood zone.

If you've ever wondered if ADHD is a real thing, the CMR is the scientific proof for it. It's a very real condition, or syndrome, or affliction, or whatever you need to call it to get your speed pills paid for without a co-pay. You apparently catch if from touching ballots in state representative elections in Massachusetts. The general public, and even poll workers don't suffer from it, because they handle so few ballots, but the winners of the elections get the germs all over them by stuffing so many into the ballot boxes when no one's looking. They should probably wear gloves.

I promised you a big secret on Saturday, like everyone does on the Intertunnel, but here it is Monday, and no secret, and now we have to go to UMASS Dartmouth first. Sorry. Don't get me wrong, you can't learn much of anything useful about your house by going to that august seat of learning; but you have to take a test.

UMASS Dartmouth is the perfect place to take a test about building things in Massachusetts, because it is, without question, the ugliest warren of structures of any kind in the world. It's not uglier than Boston City Hall, because that's impossible, but it's built in the exact same brutalist low-bidder concrete-fetish style, and there are dozens of buildings exactly like it at the campus. If Boston City Hall is just one hobo with a giant carbuncle on his nose, bumming money from you as you hurry to work, then UMASS Dartmouth is a leper colony.

So a couple times a year, they'd schedule test for the license at state colleges. I had the "book," I read it (shudders) and signed up. I walked down a hallway in some Fuhrer bunker masquerading as a classroom building, and as I walked, the bow wave of air from my passage pulled down all the various photocopy fliers kids in college stick on the wall in corridors with entreaties to Party! or march on Washington or whatever, and they skirled on the vinyl tile behind me like Autumn leaves. The heavily textured block wall wouldn't allow any hook, and were too rough to hold even a duct-taped flyer. I thought to myself, right then, for the first time, that  I was in an insane place, doing a crazy thing, among daft people. It turned out I didn't know the half of it.

The arena where I was directed was crazier. It was one of those lecture halls that holds hundreds, the chalkboard turning into nothing more than a billboard in a flea circus by the time you reached the back row where I was seated, because the room was full. And there were people taking the test in other halls like this on campus. And on every state college campus at the same time. And they did it multiple times a year. I was agog. I began to wonder if every single person in the state was going to have a Construction Supervisor's license, and mine would be worthless.

(to be continued, with a secret, I promise)

Posted by SippicanCottage at 10:50 AM

Oh man, I could smell that hallway...

Thankfully, I didn't go to school at UMass, but my school was too small to have a library big enough to spit bricks, so occasionally there'd be a bus trip down south. I don't think they provided hard hats, though, so there was a safety warning instead.

I need to be making a file of this thread. I'm thinking @ a new structure, and am needing to save scratch like Jack Benny in the poor house. Your experience, skill, and budgetary aplomb are enviable. And, your mean way with a word makes it fun to read!

Let me add a story regarding permits. To install a new water heater we were told we needed a village permit at $100.00, and the inspector had to come out right after the install. After install and corrections that needed to be made per the inspector, we did not have hot water! Turns out the installer put a return valve upside down causing water to flow in the wrong direction, valve had a large arrow indicating proper direction no less. New inspector comes out along with install crew, no one notices valve is upside down except me when I got on the ground to look at it. Second inspector ignored recommendations of first inspector completely and added his own and said call him when I fixed those also. The motto for the install crew is "done right the first time". Total investment in hot water heater: $100.00, two visits from install crew, two different inspectors contradicting themselves, me solving the problem. Alex

Leon said...
This comment has been removed by the author.
7:46 PM

Alex...what's this permit nonsense. just install it and try not to get caught. also what kind of idiot installation crew doesn't check their work. or inspector for that matter.

brethren boarding school for me. them nun didn't have nothing on either Miss Ross or Miss Halls...just saying.

keep up the good work...cliff hangers like that are a hallmark of a great writer.

P.S. Just so you know, you really truly do have to finish this thing--no backing out or excuses or "I suppose you can guess the rest" or "I'm sure you're all tired of it by now."

I am a five foot one inch (if I stretch--me or the truth) female, with a lot of brothers who have valiantly tried to teach me how to be a man, to wit: Brawns Are Better Than Brains. I have refused to take their lessons to heart, and SOMEONE has got to show me how to use brains when brawn is in short supply. (I may not be heavily endowed in the brains department, either, but I am pretty sure my ratio is still slanted slightly more toward my noggin.)(I have reliable witnesses that at least one brother has tried to make work the idea that brawn would be quite sufficient to lift a house.)

I realize you say you had a teenager helping you, but I am reasonably confident I can round up at least one vaguely guilty by-stander whenever the need arises.

(Also: since you had the good fortune of not being roped into various places perverting the reputation of 'learning,' I can assure you that much stupider things happen than not being able to hang things on the wall. In one of my recent classes, the teacher iterated that the government needed to do more to provide health care and that politics should not be involved in our health care.Yes, you did read that correctly. Further, she claimed she would be grading us on 'critical thinking,' so apparently debasing the word 'learning' is not enough for them and they're reaching for higher goals.)(And if you are less interested in the populace than the edifice: the brand new building they pulled together this year has such dandy ideas as bathrooms with 3 stalls, 2 sinks, and one soap dispenser somewhere on the very far wall; one can only presume that using soap on one's hands is not very "green," since that's the reason they give for all the other stingy-butt nonsense they do.)

Why, pray tell, are you not using Maine building codes instead of Mass???

All sorts of my favorite people commenting in this thread. I promise to see it the story through. With secrets! The Intertunnel demands secrets! And maybe a top ten list. The Intertunnel loves those, too.

Hi Anon- I am no longer a building contractor, and don't need a license, and I'm fairly sure there is no comparable credential here in Maine. Maine has the oldest housing stock in the country, and approximately 114 percent of it is substandard, the rest of it is actively on fire. I love it here!

A pleasure to read your ongoing saga and an added pleasure reading the comments. Jeez, there's a whole lotta folks out there 'sides you that write better'n me. My wife, she sez that's because I talk faster than I think. Huh, for a long time I thought that was a compliment.

Did you build in any secret passageways? Every house NEEDS a secret passageway or two or three, and a dungeon below the basement, but I'm guessing that was too expensive at the time. Bummer.

Enough of these prurient appeals to base sexuality.

We want to know how the erection proceeds!