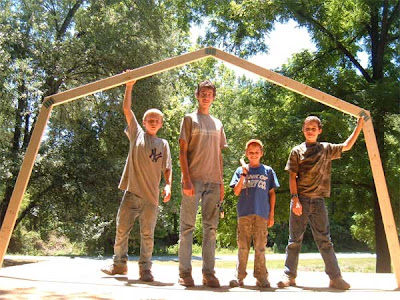 As is occasionally the case, I don't know whether to write about Ben's Tiny House here, or on The Borderline Sociopathic Blog For Boys. Ben belongs both places, I imagine.

Ben Norton was an ambitious eleven-year-old when he became captivated with the idea of building his own tiny house.

Now, adults have lost their minds, and have started talking about how they're going to live in a shed, or a phone booth, or an apartment it would be illegal to keep a death-row inmate in, because they're going to save the environment -- whatever that is -- but Ben is talking sense. He's got the urge. He wants to build shelter. That's what a normal boy does. He makes things, and maybe dreams about making bigger things.

Take a big bite, and keep chewing, as the old saying goes. Building shelter is interesting, and important, but at its most basic level, it's not rocket surgery. It's amenable to plain effort coupled to curiosity. Ben obviously had help, but the Leaning Tower of Footings he's got going on underneath his mahal hints that he really did do the work by himself, along with his mates, and wasn't just posing for the pictures. 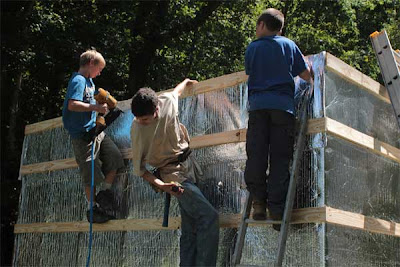 iPhone people constantly blog about their desire to mechanize the construction of home building. They figure everything they care about is made in a factory, preferably overseas where people they don't care about as much as they protest they do risk getting Bhopaled instead of them. Why not houses? What they are really daydreaming about is not having anything to do with other people, especially people whose fingernails have something besides Cheeto dust under them . They'd prefer to order an Ikea house and have it dropped off by FedEx, like everything else in their life. That's fine, I guess, but there's an enormous flaw in their thinking: Building housing for humans is already one of the most efficient, mechanized, and orderly processes there is in the American landscape. It takes so long, costs so much, and seems so mysterious and infuriating to people with skinny glasses because the process is filled with people like them -- clerks, nabobs, government officials, endless ranks of rulemakers telling the people that build shelter, and the people that occupy said shelter, exactly what they're allowed to build and live in. All that foolishness, and more, will still happen when housing becomes all pre-fab; it will just be hidden from sight at a factory instead of on display where the house goes. Then a truck will come with your Ikea double-wide and plop it down and you can live in the shabby thing without talking to anyone with muscles on their bodies that aren't the residue of mouse clicks.

That's why Ben's barn, or shed, or whatever you want to call it, is so wonderful. It is the essence of a house. It is shelter, in its simplest form -- stripped-down, straightforward, homemade. It is not trying to do much besides keep the rain off your head, and the bears out of your food. It is as iconic as a crayon drawing of a house by a child. It's an example of why the tiny house people are right, for the wrong reasons. Shelter for humans should be straightforward.

Ben has shown you something, if you'll just see it. You've forgotten what you're trying to do. Ben wasn't old enough to forget anything, so he got it right the first time. 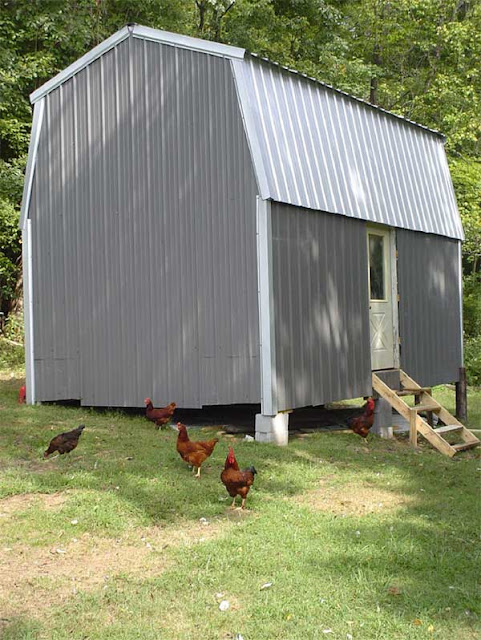 [Thanks to the lovely and talented Joan of Arrggh for sending that one along]
Posted by SippicanCottage at 1:00 PM

Ben's stupid school system is wrenching him out of his project, which will eventually include windows and a second floor. Somehow, he needs to be bused to someplace where they can teach him to parrot tenured idiots instead of learning something important.

Were I his parents, I'd do my best to leave that kid at home and let him grow up straight and true.

Ben gives me great hope this morning. Thanks for illuminating that!

Leon said...
This comment has been removed by the author.
3:15 PM

that's awesome. he got his friends to work for free. this is an invaluable tool for both him and his friends. even though i can see a number of things i'd be mortified if i'd done they're learning and will not make that mistake again. also i love it when people get exposed to building trades because they get a taste of hard work and may decide it's not for them and are happy to pay me to do it.

delete, edit, repost... why do i always see my spelling mistakes after i post something... and why doesn't it have an edit function

A 10 year with friends and a nail gun?

What could go wrong?

Hi Casey- I get the feeling he'll make things when he's older, too.

Hi Leon- Many young men were exposed to construction work in the past. College students in the summer, stuff like that. That's how I started. I employed many like that, too. It's becoming rarer because there's no work for anybody, never mind college students. It's a great loss for society in general that the average person no longer has any experience in many practical arts.

Hi anon- Most kids hurt themselves because they're completely ignorant of the things they're handling. Fire; guns; tools; things like that require familiarity to use safely. There's no magic age where it becomes automagically safe to let some one handle such things. And he's eleven or twelve in the pictures, I believe.

Hi Joan- Nice article. Thanks for sending it. I love the little shaver.

Hi Harriet- You must have noticed kids with as much gumption pass through your classes. They stick out, don't they? He's a leader of men, too. Or boys, anyway. Tom Sawyer in the flesh.

I'm laughing my head off. Such good fun here! Hey thanks for commenting on my friend's project. He is quite "the" man. As for the nail gun, he's awesome. You should see him wrestle goats, crawl through caves and flip off bluffs, and so much more. Totally agree on the public school thing.

A simple look at the difference in house prices between Texas, with relatively little regulation, and Ma and Ca perfectly demonstrates the mindset.