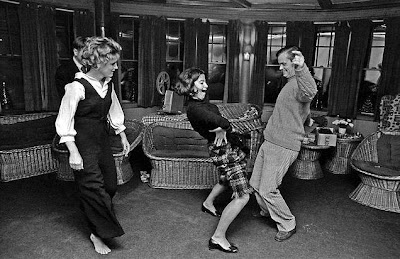 Treat yourself to the rest of the Flickr Photostream slideshow.  It's a stone groove.

Greenville's northeast of where I live now. It's on the shore of Moosehead Lake. Never been. It's Piscataquis. I'm an Oxford man. Next to no one lives in Greenville year-yound, but there's resort getaways for bug bites or chill blains to taste.

I'm old enough to be one of the small children you can see in the pictures taken earlier in the evening, but the age is all we have in common. They watched a super 8 movie, projected on a bedsheet. Then they got put to bed, and mom and pop partied hearty. It's New Year's.

These are wealthy people. At least that's what they seemed to people like us in 1969. Those are dentist's sons and car dealership owner's daughters. Things have changed and people on the dole own snowmobiles now, but it wasn't always thus. Rich people skiied and we went sledding. They played tennis and we played hockey on the corduroy ice on a pond. They drove Citroens while we sat four across in the back seat of a Dodge Dart watching the road pass by through the rust holes in the floor. They let their hair down on New Year's Eve, after the children were snug in their beds, at a modest lodge in the middle of nowhere Maine, while my parents watched Guy Lombardo on a black and white TV.

Maybe ten, fifteen years after that, the world opened up and everyone had nice cars and big houses and their kids wore what they liked instead of what was left over from a cousin's closet from the previous decade. Regular people went to the hairdresser and bought their clothes instead of making them from patterns at the Newberry's. Ordinary people ate strawberries out of season and vegetables that weren't from a can. It became quotidian to fly on planes and go to movies. The dentist life was there for pipefitters. The pipefitter's kids got braces and the dentist kids went Gekko.

And now, for reasons that can't be explained, except to say for no good reason, regular people are plunged back into a dark age; back to pressing their snotty noses to the window for a peek at the dentists. Back to Greenville, 1969.
Posted by SippicanCottage at 8:13 PM

Email ThisBlogThis!Share to TwitterShare to FacebookShare to Pinterest
Labels: 1960s, a boot stomping on a human face forever, Bits of my life pulled out and flung on the Internet floor

again with the new words i had to look up quotidian.(thanks for that)

it's always surreal for me to look at pictures from (slightly)before i was born and think of those people who were younger than i am now but have always been i people i looked up to...as it were..because they are older than me. i noticed a parent sitting with the children and i wondered if they felt like they had a clue. i always assumed as a child that they did. now i wonder if maybe they were there because being a child isn't such a bad gig and they were having a small escape.

it is amazing how far we've moved. no one on the dole today would be the least interested in that old reel to reel movie technology...they all have flat screens and can watch movies on their phones. also did you notice that high end furniture? i can't imagine that do anywhere the least bit fancy today. maybe they were on their uppers but it just wasn't as far up as we supposed at the time.(theoretically, myself not being born and all)

The small town desert version of this was card tables, and bridge. Adults dressed to the nines, eating and drinking.. and raucous laughter, while we hid out in the back bedroom, watching black and white TV, and eating bridge mix. They called it supper club, and met once a month for over 50 years. It seemed so normal to me as a child. I now know how rare it really is.

...regular people are plunged back into a dark age; back to pressing their snotty noses to the window for a peek at the dentists.

Well, I hope that's as bad as it gets. We will still be living well compared to 99% of history but it won't be what it could have been.

I'm still waiting on that techno-fix to pull us back from the brink.

For 1969, that's rather an extravagant use of photographic film, too.

This is what is happening
http://www.zerohedge.com/news/2013-03-09/jim-rogers-were-wiping-out-savings-class-globally-terrible-consequence