Ancient Posts Currently Under Assault By Skeevy Spammers For Some Reason: This Old Cave

Back porch on cave broke. Again. Caveman broke again, too. But must fix. Cavewoman tired of ants massaging bottom of feets. Caveman fix once and for all. 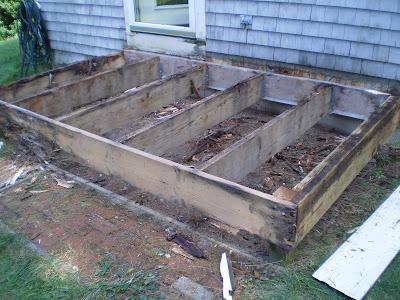 Caveman fixed porch two years ago. Not caveman's fault porch not last. Porch made from leftover framing lumber scraps from house because caveman never have budget. Caveman not know what budget is. Some kind of bird, I think. Lasted fifteen years anyway. 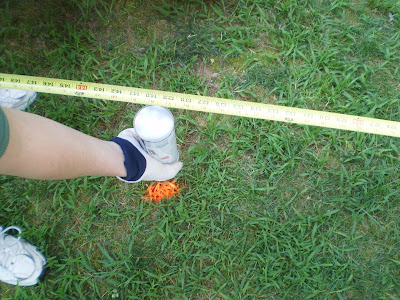 Must make mark in life. My mark is upside down, like everything else in Caveman's life. Caveman is mystified by runes on unholy measuring tape. Only use if necessary. 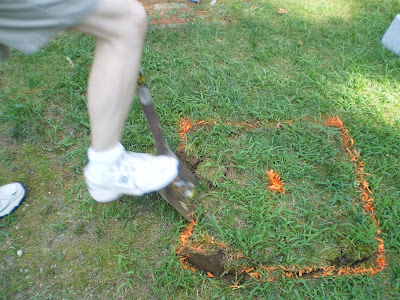 Caveman have cave tan. Caveman asks reader to note that leg is moving too fast to be seen clearly. Caveman only has two afternoons and a few hundred bucks to finish. Make holes! Caveman qualified for that. 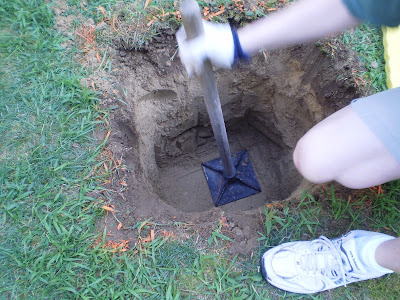 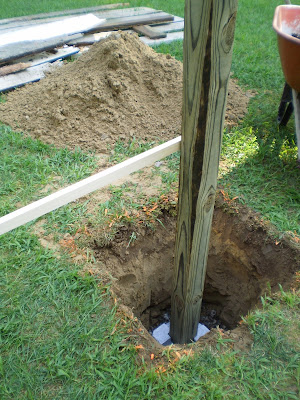 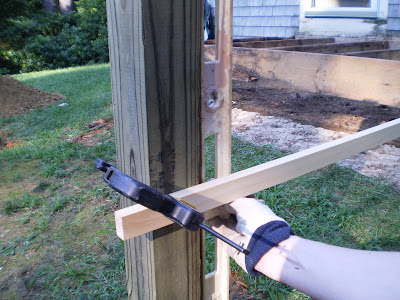 No measure if caveman can help it! Use stick for straightedge and plumb with level. When level is plumb, post is plumb level. Caveman know what desk jockey thinking. What with Caveman wearing gloves? Caveman is caveman, not barbarian. 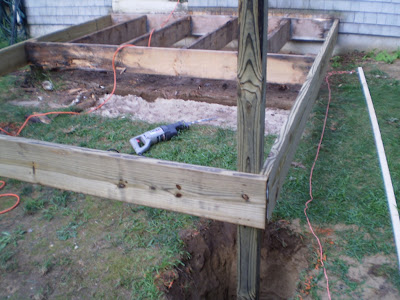 Make mark, use lumber for straightedge now. Like Caveking coronation, make sure crown of lumber faces up. Caveman is swaybacked, caveporch is not. Caveporch will be two times bigger now. Cavelady will forgive everything now. Cavecubs will have place to expose themselves to sun god now, but not in the mud for a change. 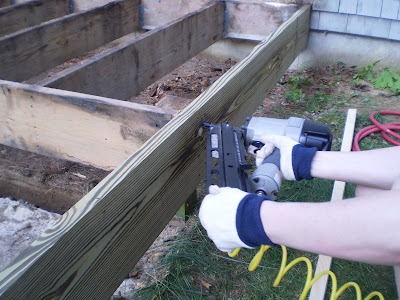 Caveman use something called newmatic or some other sorcery to pound nails. Must hurry. Have tables to make after dark. 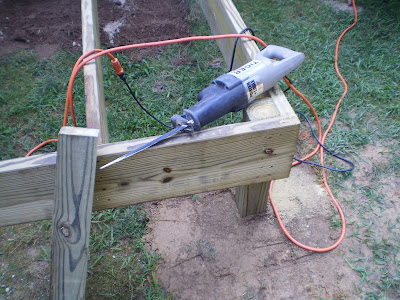 Caveman has all the barbarian tools. Sawzall great for de-boning large prey and tax assessors. Caveman just kidding. Tool is too dirty to use on large prey. 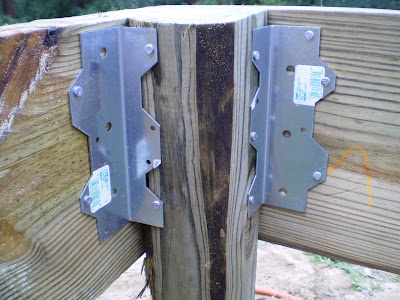 Pressure treated wood used to scare non-cavemoms with scary arsenate word. Laws passed. Lumber now treated with other harmless stuff. Of course new stuff rots nails. Caveman shrug and back up everything with galvanized plates and hangers and double hot-dipped galvy nails. Big Cavecub bang many nails in hangers. Little Cavecub only one who understands runes on tape, so he measure: 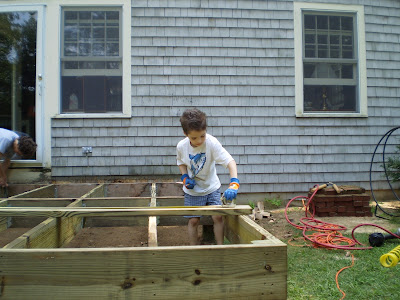 Only measure first and last decking board! Waste of time to measure and cut all one by one. Install all crooked anyway. I show you what to do. You think caveman smart, but caveman just lazy and in a hurry. 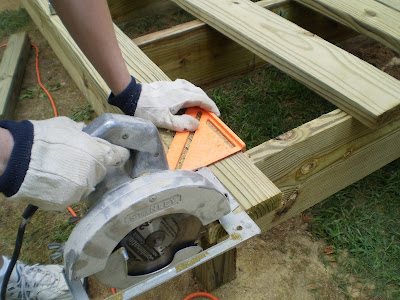 Cut first and last with circular saw older than caveman. I changed the blade when Reagan was President, so saw is ready for additional decades. Use Speedsquare as fence for straight cuts. 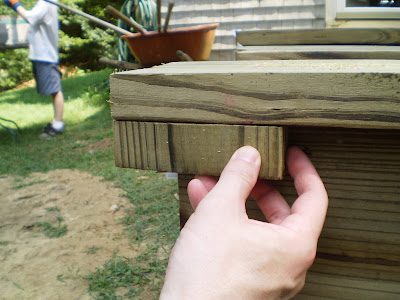 Caveman told you: do not measure with runetape. Use prop and line things up. No understand measure twice cut once. No measure at all, be drinking mead and eating roasted grill flesh while Norm is still trying to finish in dark while mosquitoes feast on his flesh. 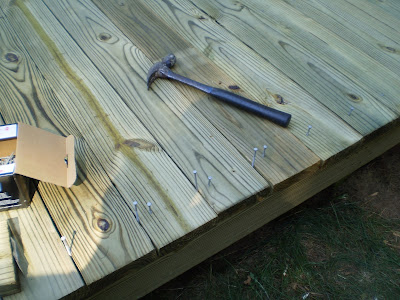 I tell you one last time: No measure. Nail first board, last board. Flop other 2 x 6 PT boards down. Shove 3-1/2 inch dipped galvy ring-shank nails between boards for spacers. Pound rest of nasty nails into boards at joists. Use big nasty framing hammer or you have no shot, because wood is like wet iron. Caveman not use newmatic gun because nails would rot, and newmatic would set nail in, making many thousands of little holes filled with water. Pressure treat cheap and no rot, but water in holes freezes and pulls boards to pieces. 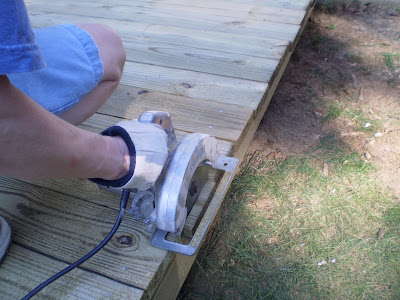 Caveman turning into harpy: Do not measure. First and last board right length. Stretch chalkline string between them, snap it and cut on the line. Caveman use hot pink chalk because caveman is in touch with his feminine side. 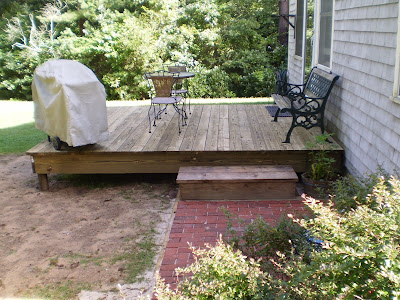 Caveman lay bricks left over from demolition of gas station ten years ago in running bond pattern in sand from little cavecub's old sandbox. Even caveman knows step should be very deep and wide outside, and land on transition to grass, not grass. Rake out soil, throw down seed and go make a table.

Caveman will paint entire thing when it dries out. Cavelady likes bigger porch. Maybe show Caveman her feminine side too.
Posted by SippicanCottage at 5:00 AM

Cave man have sense of humor like smell. Smell funny to me. Have beer, be happy.

All I made last year was the three steps off the porch. No transition. Big steps.

Paint them? You are too civilized!

Blogger note: why do spammers prey on older posts? My 2 theories are:
1.) They want to hide there like roaches, hoping to not be found;
2.) They are machinery, and they can't figure out what current means.

Back to porches. I bet you never read, or ask for, directions either.


Grrrrrrrrrr....... Pissed off all over again, you transdermal, interoceanic schmuckplaster!

I got a boatload of what looked like Russian one-day turnaround mortgage loan spam.

Maybe they thought I live in Cyprus.

Around here I put pyramidal footer blocks on the surface of the earth. I think they are still below the frost line even then.

Pressure treated SYP deck boards have such a high MC that I jam them tight against one another when installing them - they will then dry and created the ideal gap between themselves. Using a spacer creates a gap big enough to throw a cat through. My cats don't like that.

I had a plate fulla spam on several older posts, too. They are getting sneakier and sneakier. They write as though they actually read the blog, but the dead giveaway is ANONYMOUS.

I am shocked that your frost line is only 30 inches.

With all the whining, whingeing and sniveling that you've done about the minus 100 degree kelvin hellhole that you inhabit, I'd expected at least 32 fee