I'm Too Busy Making Things To Write, So You Get The Process Is The Product From 2011 Again. I Wonder If There's Some Sort Of Meaning In That 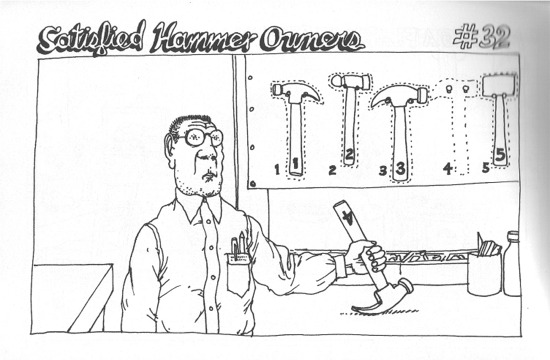 I come not to bury Jacques Jodoins, nor to praise him. He doesn't require anything from me, anyway. He is a watch with the hands and the stem on the inside, and the gears facing out. But he is interesting to me.

His workshop is perfect for the Intertunnel, isn't it? The Intertunnel is just a big Jumbotron for us to act outrageous on, on the off chance we can get the camera to linger on us during a time-out. Indecent exposure or marriage proposal, doesn't really matter what you do, you'll have your moment on YouTube eventually.

But Jacques did not produce that midden of moil for our amusement. He wasn't trying to get in Guinness or astound Ripley or even catch the woodworking world's eye in the form of that video. He was amusing himself, first, last, and always.

And what's wrong with that? Honesty is what you do when no one's looking. He's truly honest. He's not going to take all that stuff down now that he's been on the Jumbotron and start building the world's largest train set in its place to take another bite of the attention apple. He was what he was, is what he is, and will remain whatever that makes him. He'll die down there, and I imagine he'll die happy.

I know what everything in that basement is. Every last thing. I don't have 1/2 a percent of it, and if offered, I'd turn down the gift of most of it. And I make furniture every day, for a living.

Unlike most of the world, I am not allowed to have the Process be the Product. At the end of the day there has to be something tangibly different with the world or we don't eat. Sometimes we don't eat anyway. Most of the world we inhabit now is all Process and no Product. What is Twitter, or Tumblr, or Facebook, or a million other things you could name that consist solely of: This is how I go, when I go like this.

The federal government thinks the process is the entire product. The public school system can produce only public school teachers. The EPA is now supposed to protect the air from humans. The Department of Energy doesn't make any, and would prefer you didn't as well --or else. Cities like Detroit are trying to exist with no population now. Search your mind. You'll have to search hard to find exceptions, not examples.

I have a tendency to notice things that others overlook. It's not my fault I notice things; don't be hard on me. There is no furniture of any kind, not even a component of a piece of furniture --there isn't even any sawdust-- anywhere in Jacques workshop.

He is happy there. Let us praise him. He is our God.

(Thanks to old StumbleUpon friend Maxismax for sending that one along. StumbleUpon. Heh.The process is the product.)

Posted by SippicanCottage at 10:54 AM

Methinks he's a collector. Nothing in there shows the slightest sign of use that I can see. But, as you suggest, more power to him if that's what rocks his boat.

I was almost thrown out of my continuing ed class for pointing out the idiocy of a process is product approach. Oh well I guess they don't want me in the profeshional ejucaters club
D

My woodshop has hot and cold running water....well a drip from a hole in the roof anyway, I kind of like it in there.

I have to confess I like the various wagon wheels with their jars for this and that. They may be common, but I've not seen them before.

i think he must make stuff from time to time probably, more in the past. for one you can walk through that shop. my experience with people who collect rather than make is they tend to collect in a way that makes things too closely packed to work. Also he has very good utility of space in the table saw/joiner/plainer area. the fact that all the equipment is on a vacuum system helps no doubt with the dust. all in all someone very anal about organization which in my book is only a minor character flaw. i did notice duplication on some tools and some that i didn't recognize but the camera work was not all that good in spots.

I didn't see any chisels or planes, nor did I spot a sharpening station.

I agree that he's a tool collector and not a woodworker, and he's got a very impressive collection indeed. God bless him.

I think I saw a couple of boxes on a drill press (I saw three drill presses), so maybe he makes boxes.

Kinda like the sterling silver serving set and china in the dining room that someday will be used for that glorious grand banquet.

There is a sharpener, on the right, a few seconds into the video. One of those powered wetstone things.
It looks to me like he makes similar things over and over. There are lots of jigs, that's why there are several drill presses and chop saws. Whatever it is he is making he sets up once, then works around the shop, station to station, not having to stop and reset a machine for the next process.
The chisels are probably in a padded drawer in one of the finish benches.
DoHS

I assume the hammers are numbered on both sides of the handle.....
....Else Neat Hammer Dude is going to be disappointed when he hangs up number 4.

I just went to the video on youtube, and there's a link there to an article that addresses, among other things, the no-dust business.

He has made some furniture - children and grandchildren are mentioned, and his first coffee table. It really was a little more human, reading the article.