It's T-Bone Walker's World. We're All Just Doing Two Shows A Night In It


I'd be hard-pressed to come up with anyone as musically influential as Aaron Thibeaux Walker.

No, really. If you've ever been in a juke joint, or a road house, or a cathouse, or a supper club, or any other borderline disreputable place where liquor and music is served, he's the patron saint of whatever you saw on the crummy stage in the corner. He's the first guitar hero. Gave birth to the birth of rock.

He always looked slick, which I like. People on the stage should look different than the audience. They should act like they belong there. He sang, and then he sang through his guitar. That's the key to his style. It was all melody. And he sang about mundane things that everyday people could relate to. Tuesday's just as bad.

Big band music had to go somewhere. T-Bone Walker took it somewhere else, near where we all live. I very rarely miss playing music. I did it for money. But every once in a while, I think of the tiny stage in the Met Cafe in Providence, and cheap beer and the pool table that listed to port a bit, and I think of T-Bone Walker, and how much fun it was to be sad together on Friday night. 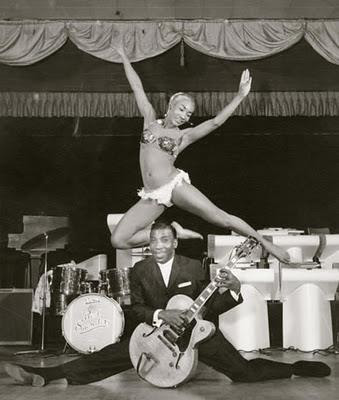 Posted by SippicanCottage at 6:07 PM

Thanks, he deserves the recognition and the honor. As usual, you write beautifully about it.

This may be my favorite title ever for an article. I was going to try to say a few words about why it struck me so strongly, but doing so would take away from its beauty. It stands on its own!

I just might have a new induction to my Cool Hall of Fame soon. Thanks so much for the introduction. One never knows what one doesn't know. E.

Ah man there's so much in that photo that I can't even start.