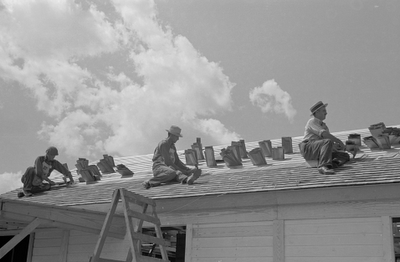 People have the wrong ideas about what a house is.

I've spent a goodly portion of my life observing people and their houses. I think that dwellings show more about people than any other publicly available information about them. Hell, no psychiatrist knows more about a person than their housepainter.

People have got it into their head that a house is an elaborate and fussy thing, antiseptic; it's like a gigantic automobile, and that it should look brand new at all times, forevermore. I do not share this view. I think that your house should get better --be better, more comfortable, more visually appealing --the longer you live in it. It should suit you, not the other way around. This is not achieved with plastic slipcovers and powerwashers.

I am living in what was, until recently, an abandoned home. It had big holes in the roof through which animals that could cast shadows passed in and out. All the plumbing and heating pipes had frozen and burst. It had suffered at least two fires before, the evidence of which was still visible. It was a wreck, and so, cheap. But it had not been neglected. I pray to someday own an old house that has been neglected. Neglect does not indicate a profound contempt for the value of the original house the way the mindless remodeling that went on here does. Wave after wave of owners had mostly wrecked everything in the house worth saving, and had added all the cancers that Home Depot has to offer in their place. They figured the stuff wasn't brand new and shiny any more, so why keep after it? I have muttered under my breath: I can fix the hole in the roof; what did you people do with all the goddamn doors? I don't need a ceiling fan in every room in a house within driving distance of the arctic circle, you lunatics; I need doors in the doorjambs.

Everyone searches for a free lunch. But there is no free lunch in a house. Only a direction. Or, more to the point, there are only two directions, better or worse. You are never at rest. Most everything I see touted for installation in a house touts as its prime characteristic that it never need maintenance. That's the "tell." If you ever see the term "never needs maintenance" again, substitute the word "disposable," because that's what it is. It never needs maintenance right up until you throw it away in an angry fit, 100 years before things that need maintenance are getting warmed up.

I work, really hard, making cottage furniture here in Maine, on one floor of my house. It's fairly large. It's partially below ground, and two storeys up at the same time. It was a really dreary hole when I first set up shop. I've noticed that the longer I work in there, the pleasanter the place becomes. I tinker with it some, but mostly it organically becomes more useful and pleasant because I begin to place things where they are handiest, so clutter is slowly cleared away, and with less clutter, the place is easier to clean up. I put back five windows that former owners had removed, so it's brighter  and warmer than it used to be, too. It's an example of the phenomenon: the longer you bustle about a place, the more suited to you it should become. Many kitchens achieve this in American houses, but few other rooms really do. I've found many dozens of people, living in houses with 5,6,7000 square feet -- even more than that -- and still huddling in some little corner of it with the only possessions they truly like, trying to be comfortable, while the rest of the house is a furniture museum.  They used to ask me what color they could paint the abandoned rooms that would tempt them to enter them.

I could belabor this point. But the only truly permanent installation in a house is ceramic tile in a color you can't stand. If you like the color, it falls off the wall. Everything else is ephemeral, and will require maintenance once in a while, or replacement if it can't be maintained. You might as well get used to the idea up front.

Women now visit the vivisectionist -- er, I mean the doctor -- and say they'll pay big money to look like a 48-1/2 year old burn victim with a fat lip instead of the fifty year old woman they are. Others buy vinyl siding. But the impetus is the same. You recognize the direction you're heading, and instead of cultivating the passage of time, you want to fight it. Deny its very existence. Good luck with that.
Posted by SippicanCottage at 9:52 AM

Email ThisBlogThis!Share to TwitterShare to FacebookShare to Pinterest
Labels: architecture, Bits of my life pulled out and flung on the Internet floor, housing

I once owned a wood sided house and swore I'd never own a house unless it was made of brick - we're in the deep south and have hard clay-ey soil, so you see why that works for us.

Second best - I have a house with a concrete/brick base and old growth oak siding. We need to stain it again (or rather our guy needs to stain it again) but I can see that it'll last forever. The dining/living area roof is held up with pine beams thirty foot long and 12x16. They'll last forever, but if something ever happens they'll be irreplacable. We can't pain the guest bathroom as the walls are 12" wide clear pecky Cyprus. It's listed separately on our homeowners insurance since you can buy it - at $18/foot.

I love my my house and we live in the whole thing.

These are lessons I am learning. Our house in AZ, though it had its problems, was solid. It had solid wood doors, including the cabinets, and for all it's faults I learned a lot about maintenance while we lived there. One thing we never had the slightest inclination to do was renovate. When it came time to sell, this counted against us - we didn't have granite countertops, just the tile that came with the place, and people said it looked "dated." The guy that bought it is going to remodel and flip the place, and I wish him well - but I don't wish the results on whoever buys it after that.

We're renting a place now, here in FL. It's solid, too, but has been renovated. The cabinet doors don't open all the way, and the vinyl veneers are peeling off. It looks nice, mostly, but with use it just gets annoying. On the plus side, we are learning. Hopefully, when it comes time to buy again we'll be as lucky as we were the first time...

My house was built in '49, which is ancient for Arizona. Block walls covered in plaster and lathe. There are coved ceilings in the living room. Unfortunately, whoever I bought it from "remodeled" it in the 70's, and not by a professional, but somebody's brother. When I moved in, the only bathroom had wall paper on top of paneling and shag carpet with an ugly oak vanity sitting on it. All the lovely solid wood doors, that I imagine had crystal knobs, were gone and replaced with hollow core and ugly handles. Over the years we have tried to get back to the charm and bones of the house, but I still lament the loss of those doors.

If I could write then I'd have written this...good stuff.

The title of this article threw me for a loop.

It took me about 6 months to realize that you don't own the place it's just my turn to pay the bills for a while. After 14 years we've slowly adapted to the way the house likes to do things.

Leon said...
This comment has been removed by the author.
9:00 PM

"the only truly permanent installation in a house is ceramic tile in a color you can't stand"
ain't that the truth. last spring we removed a good quantity of the stuff for someone using 8lb sledges. after 3 hours all of our shins were bleeding and the were tile fragments in the walls and a few in the ceiling.
once again well written. i think you need to publish a definitive guide so we can all stop buying snod houses.
leon

"...cultivating the passage of time."

That's it, that's what I keep telling people - just not as well. We buy furniture expecting our grandchildren to be fighting over who gets it when we die.

You don't replace everything on 7 year cycles when HGTV tells you to.

H&G? What do they know, other than they're trying to sell us something.

That's what WE have to know.