A Man Called To Say He Had A Good Day. Nothing Bad Happened 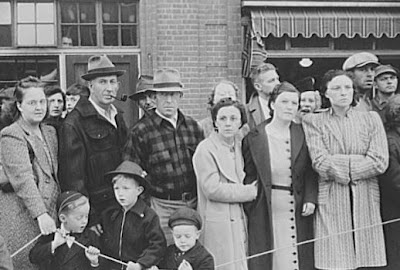 I'm forced to read the local papers now. They're uniformly dreadful. But every once in a great while, there are some bright spots. I like finding people working on the edge of the map and the sharp edge of honest commerce, too. Local papers in the middle of nowhere are like that sometimes. Local papers can't afford to have all editorials disguised as news stories, all the time, and still make a buck. People in small towns can't tell half their fellow citizens to pound sand with impunity in most any walk of life.

I've discovered the piquantly masted Fiddlehead Focus recently, which serves the far-northernmost communities in Maine, around Fort Kent. Ya gots ta get in the hammah lane fah a lawng time to get there from heah,  I'm tellin' you what, is what I mean, jeezum crow; but if you read their paper you feel like neighbors. If you read the Bangor Daily News and felt like they were your neighbors, you'd stop reading immediately and move farther away, after bathing in bleach. The Fiddlehead Focus is charming.

"Doing the needful," as the Indianism goes, gets done in the local papers. The quotidian details of life get reported accurately. But who says accurate means dull? The Fiddlehead Focus Fort Kent police blotter is a wonder.

That's three straight entries in the log. What a story! For pathos; excitement; suspense; character development -- for those of us looking for a touching denouement, with a hint of the scolding of hubris -- what story can compete with that? Hemingway couldn't touch it. It's a daisy.

There's hundreds of entries, not because Fort Kent is a hotbed of crime, but just the opposite; when nothing much happens in a Police station, you tend to write everything down. In Chicago they only report the murders if the corpses are stacked high enough to topple over and discomfit a passerby. They're missing the wonder of life:

There are unusual things on the road in Fort Kent:


16:05 - A man requests that the police escort him through town, because he is coming in with a combine machine.
17:16 - A man calls regarding an orange vehicle.
07:59 - A caller needs a permit to haul a shed.
12:47 - An officer spoke to the road crew and they put the light back on at Main and Pleasant.

There is love, and loss, and redemption:


17:35 - A woman would like to have an officer call her.
05:50 - The Quebec police are looking for a woman that stayed the weekend at the university, but she failed to return home when she should.
21:47 - A woman asks for an officer to come by a convenience store.
10:09 - A female came to the station to see the chief.
10:14 - A female left the station with the chief.

People trust the local police, and rely on them overmuch, perhaps:

They still farm up north in a serious way, and so there's more than just dogs in the report -- and by the by, the last two items look related to my eye, somehow:

The kids are alright in Fort Kent, but being human, they do get up to things:

We can't go on together, with suspicious minds:


16:36 - A man calls to report that somebody with long hair is going down the riverbank.
16:50 - A caller from the Madawaska Police Department says there is an ambulance coming in with a patient who "...may act up."
20:24 - A person reports someone is yelling or screaming in the trees near a residential street.

The grammar and orthography in the Focus isn't bad by newspaper standards, although there are about a dozen different entries that refer to a "loose dog" wandering around. I think they mean there's a dog loose, but I might be wrong. I've never been to Fort Kent, and their attitude towards the mores of stray dogs might differ from my own. The editor is a wag, though:


22:00 - Four women return a fire axe that fell off a truck that was heading to the St. John fire.  The women want this in the police blotter. (Editor's note: You got it.)

Even the crooks are honest in Fort Kent, apparently:

Fort Kent is an out-of-the-way place, and apparently there are no US Senators or pop singers in town:


18:23 - A woman with the recreation department reports nothing is happening at the bathroom.

There's a lot of what would pass for low-hanging fruit, arrest-wise, elsewhere, but I have a feeling the local police must bore a lot of dry holes before they strike a gusher:

15:47 - A caller reports that a pick-up on Caribou Road is making a bunch of noise.
16:03 - An officer reports the noisy vehicle is parked right now.


02:36 - An officer, state trooper and a prisoner arrive at the station.

And the capstone of the proceedings, the single most lovely sentiment I've ever read in any police blotter:


God bless us, every one!

And don't forget to read The Rumford Meteor, or you won't know what it says.
Posted by SippicanCottage at 10:21 AM

Ok, so now my kids think I have lost my mind, because I just laughed out loud (!) through that whole thing! I grew up in a smallish town, and, our paper used to be just like that. Unfortunately, the town grew up and the paper went bad. I don't even get it anymore. "Drizzle". ha!

Hi Leslie- I are successful writer! You is laugh! It's teh funnay!

Teresa- I thought about you and your hubby when I wrote this. Not exactly PQI, but close enough, innit?

I can't believe you remember the "irony free" line from a two year old essay.

I almost cried at the last entry - such a Jimmy-Stewart-world that we're too smart, hip, and evolved to ever visit again. What a dream to have a world where people are caring, loving, and sincere, instead of smart, hip and evolved.

I went from Atlanta to a small college in mid-Georgia.

On the local radio station, they sat time aside in the afternoons to read obituaries. My college roommate and I can still get the hysterics by mimicking to one another how the announcer said "she passed" with this hilarious Southern accent.

I've been meaning to write a blog about that experience.

This was awesome. I chuckled so much.

BTW: I live in a suburb of Atlanta, and the local paper here has upped its crime rate, but when we were first here "goats" and "deer" made the front page news. It was always a rag, but now it's a rag with sad people doing sad things. :-(

"A man calls to ask if his dog is at the station. It is"

Well, that's happened to me, so I guess I live in a small town, even if we are only 20 miles outside of Chicago.

Actually, in my case it was worse - the Police called me to let me know they had my dog. Apparently she'd gotten loose. When the cops saw her walking down the road they stopped, and when they opened the door she hopped in. They took her to the station, checked out her tag and called me. When I showed up she was just wandering around the station behind the counter among the cops' desks.

Watched John Stewart the other evening on The O'Reilly Factor. He talked briefly about being down south for the convention and how extraordinarily nice everyone was. He said it sort of got on his nerves, as he felt it sounded like people were making fun of him.
How sad is that? - that nice and simple and decent is perceived to be so odd as to be thought of as irony.

I once lived in a small New Hampshire town that was not too different from Fort Kent in regards to the police activities. The only time there was an uptick in the level and types of activities reported was when the summerfolk were in town.

I'm from Fort Kent, live in the SF Bay Area now. I have Fort Kent on Google alerts so I came across your blog. Fort Kenters like the police blotter too. We all laugh. Or we find fire axes and aim to get listed in the police blotter. But yes, Fort Kent is still the little town that could. I don't think that'll ever change.