The Gas Tank Of Damocles 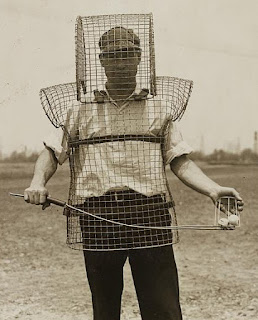 Let me wax philosophical about my wife's gas tank.

My wife saw a piece of metal hanging below the car that looked as out of place as an honest man in Congress. One of the two straps that held the gas tank from dragging on the road had rusted clean through and broken. The other strap looked as reliable as cell phone service in a tunnel. Something must be done, and immediately.

My family never goes anywhere much now. We cannot hope to weather much bad luck with our own meager resources, and we cannot rely on others, so we keep our heads down. We were lucky that we discovered the problem in our driveway, instead of on the highway. You might think us daft for being grateful for a broken gas tank strap in our driveway, but we were. We were doubly grateful that it wasn't February, as well. So we offered our hosannahs. Now what to do?

In a fiscal landscape that made any sense, I'd pay a mechanic to repair the car. There's a fellow down the street --walking distance, what a luxury for us ---and he's honest and could use the money. He's my neighbor. But I poked around and found out that the repair would cost maybe $750 at a dealer. The mechanic down the street might only command half that, but it's still too much. I'd have to fix it myself.

I do not enjoy fixing my car. I've done it, back when I was young and Gerry Ford and Jimmy Carter were desolating the landscape, but I have no natural ability or affinity for it. But I went to Amazon, and found the correct parts, and ordered them, and crawled under the car and fixed it. My older son is old enough to help now, thank goodness. I am somewhat infirm in certain ways, and to lay vaguely upside-down under a car yanking on rusty bolts nearly overcame me. But after two days of effort interspersed with trips to the fainting couch, we had replaced the parts. The repair will outlast the car.


I am barraged daily with references to Helicopter Ben running the Treasury printing presses day and night, and thereby causing inflation. It's an insane idea. When the velocity of money sniffs zero, there is no inflation. The Fed makes money and gives it to the government, who lends it to itself, and none of it ever makes it into the wild where a car mechanic and his downstream brethren might get ahold of it. For productive people in today's American economy, the money might as well not exist. The bill for it will exist plenty in the future, of course. But when the velocity of money is zero, the future must be entirely discounted. It's a meaningless concept, like watching an unplugged clock.

The term velocity referring to the passage of money through the alimentary canal of commerce is very descriptive, and apt to my circumstances. The economy is in exactly the same shape as my wife's gas tank -- filled with fuel which only makes it sag on its rusty underpinnings further, making it more difficult to fix, and dangerous to be underneath, but you must bang around under there anyway because there's no other choice.  Nervous Nellies endlessly warn me that if it was all released at once, it would explode, but that eventuality is remote compared to going hungry because we can't drive to the supermarket until it's fixed. And above all, the fuel isn't taking you anywhere because the whole apparatus is busted, and the process to fix it is busted, and if you want it fixed you better do it yourself because nobody outside a building with a seal on it has any money.

It's hard to work under the gas tank of Damocles.
Posted by SippicanCottage at 4:16 PM

I can identify. There is one nice feature of old cars, though - and that is that there is generally sufficient space to do the work without resort to purchasing all new, specialized tools.

This does not render them any more enjoyable to work on (though there exists a subset of humans who seem to enjoy it), but it is, at least, less expensive.

Congratulations on a job well done. Now take your savings, drive to the store, and purchase a nice can of spam. Fried with pineapple, it can be lovely.

Mr. Sippi.
"It's hard to work under the gas tank of Damocles." is one outstanding sentence.

MAX, you might want to explain your icon for the edification and enjoyment of regular commenters.

Ditto the praise for 'under the gas tank of Damocles'. Well said.

I don't work on my own vehicles much anymore but working beneath them is definitely the worst part of that: rust and dirt in your face, down your neck, and all like that.

But, all that said, let me see if I have this straight.

People who can smelt their own iron, or folks who can forge a steel ax and build a cabin with it, or guys who can make knives from scratch, those folks are admirable because they can 'do things.'

OTOH, people who fix their own cars (regardless of the reason) are somehow cheating the economy of much-needed commerce?

I take your point about the Fed's policies and I saw the thing at Zero Hedge about the low velocity of our money supply these days. Scary thoughts, those.

Nonetheless, I don't think fixing your own car was the best basis for making this particular argument.

Hi Max- A whole can? What are we, Rockefellers?

Hi TMI- Portland, Maine, is considering having trolley cars again. I'm not joking. I'm trying to picture a trolley in Maine in the winter, wondering if it will have an icebreaker prow on it.

Hi jhc- Thanks for reading and commenting.

When regular people don't participate in the regular economy, the economy shrinks. Sensible people don't spend money they know they can't replace. No one owes the economy an explanation when they don't show up clutching money.

It's an interesting topic an I'll write about it some more.

I don’t know why, but I do not agree with we’re going down the tubes and our grandchildren will live on turnip greens and cornbread. Maybe it’s from being a rural American by birth and upbringing.

The other aspect of taking larger and larger tax bites out of productive individuals and businesses is that the concept of "going Galt" is scalar and thereby almost invisible. By scalar, I mean that people don't simply drop out and move to Colorado like in the book (which would be noticed), but rather reduce degree by degree the energy and effort they put into building and growing commerce. The more the "system" takes (taxes, fees, regulatory fines, union inefficiency etc), the more the productive individuals within the system will slow down, ensuring a slow to nonexistent recovery. Exactly what we are seeing.

A trolley in Maine, in the winter, you say. Max can expound on the trolley in Oregon in the winter. As I recollect, frost, the occasional snow and ice are beyond its capabilities. A real winter could pose a real problem.

One of your best posts. "But when the velocity of money is zero, the future must be entirely discounted. It's a meaningless concept, like watching an unplugged clock." Priceless. Send it to the people on Wall Street. you got it!