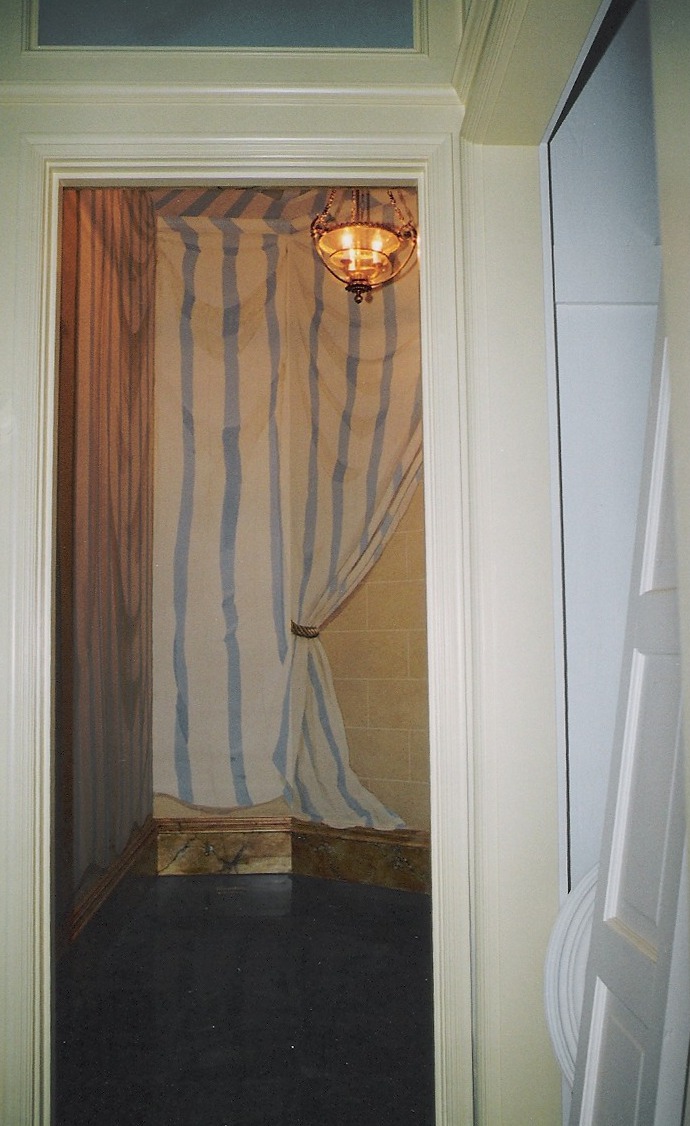 I found another view, into the painted bathroom shown yesterday.

For the full effect, you have to understand that a toilet would be plopped down along the left-hand wall, as far in as it would fit. That's a seven-foot-plus-high door, IIRC, and there's three or four more feet of wall above it. It was a ridiculously proportioned room. The architect should have been maimed.

You can see the sandstone block walls effect. They had quite a lot of textural color variation when you got right up to them. The baseboard and doorframes are faux siena marble. I'd been doing work like that since the late seventies. I was fairly good, and quick, at that genre. It was a fairly common motif back in the day. Not sure if anyone's doing it much now.

The effect is not that hard to achieve. The trouble with almost all of it, as executed, it the people doing it have no idea what a real rock looks like. They learn it from a style book, which has a little patch of it pictured, and then paint a mile of it somewhere. Veins that are supposed to look like lightning bolts look like vermicelli.

As I got better at stone techniques, I used fewer and fewer tools. After a while, I discovered you could use crumpled up newspaper, pressed into a glaze, to make the primary pattern. The owners of the houses generally don't like to see you making six figures painting their houses using a newspaper that looked like a bum's comforter, so you'd have to keep a box of expensive French badger hair brushes around for show. Back when I was single, I'd tickle their nannies with them to keep them limber. Keep the brushes limber, I mean.

There's some competent instruction for stone and wood in The Art of Faux: The Complete Sourcebook of Decorative Painted Finishes (Crafts Highlights)

. It's out of print, I think, but a used one will be fine. Yours will look plenty used plenty quick if you leave it open while you work anyway.

I have almost no pictures of my work from back then. I tell my children that you used to have to buy a reel of plastic film covered with metallic goo and keep it hermetically sealed in an expensive camera, and when you were done with 24 pictures or so, you'd take them out and drive to a store and leave them with a clerk and then go back a week later after they were done drizzling them with strange chemicals and printing them on shiny pieces of paper. They were all completely white or completely black, generally, when you finally got a look at them.

I tell them, but they figure I'm pulling their leg.
Posted by SippicanCottage at 10:06 AM

Email ThisBlogThis!Share to TwitterShare to FacebookShare to Pinterest
Labels: architecture, arts, Bits of my life pulled out and flung on the Internet floor, honest work

" Back when I was single, I'd tickle their nannies with them to keep them limber. Keep the brushes limber, I mean." Does Mrs. Sippi know about this?

Kids: Can't tell 'em nuthin. And now there's pretty much no such thing as photographic truth.

Best bench evar! Truly. Thank you so much.

I love the little room---I can understand why everyone would be charmed and stunned by the exquisite "fool the eye." But your comment, "It was like an elevator shaft with a crapper in it," reminded me of this: