We Took To The Ramshackle Victorian Near The Woods

“There is nothing that I so greatly admire as purposefulness. I have an enormous respect for people who know exactly what they are doing and where they are going. Such people are compact and integrated. They have clear edges. They give an impression of invulnerability and balance, and I wish I were one of them.” --Louise Dickinson Rich

I do not have any money, and suddenly I want some.

I've made rather a lot of money -- for other people-- at one time or another. Upon reflection I realize I didn't like any of these people, and I made the most money for the people I liked the least.

If I made money for my own use, I'd have something to lavish it on today. I'd reach out the hand of the man with resources and make something happen for no reason other than that it should, and I could. I'd buy Louise Dickinson Rich's Maine cottage. 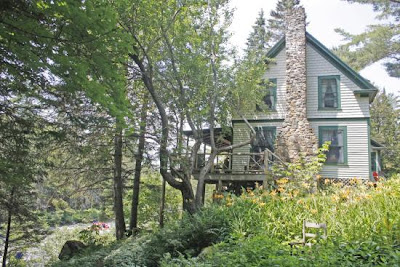 Oh, they want 1.3 million for it, but that's not enough. I'll need much more than that. There are two houses, a "winter" house and a "summer" house, and I want them both. They're only selling the summer one. I want to offer the owner whatever it takes to stop monkeying around with it, and acting like a real estate vivisectionist by parceling out hams to fools. I want the whole pig.

Louise Dickinson Rich wrote We Took To The Woods in those houses. Hell, the chair she sat in and the typewriter she banged on is still in there. 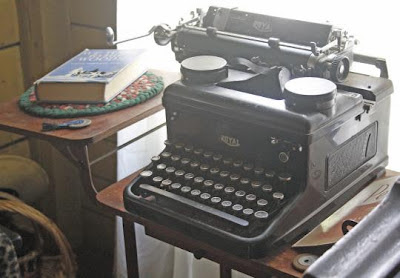 The whole place is just as she left it, and it will be pulled to bits, or perhaps brined and immured in an aspic she never would have tolerated. One way or the other, the wrong people will get hold of this place, and do the wrong thing in it, and to it. Her Wikipedia entry mentions: "...a Thoreau-like existence..." Yeah, sure, if you don't know anything about Thoreau, and never read her book.


We belong to no cult. We are not Nature Lovers. We don't love nature any more than we love breathing. Nature is simply something indispensable, like air and light and water, that we accept as necessary to living, and the nearer we can get to it the happier we are.

When we first moved to Maine, our neighbor, a sterling fellow, gave us a copy of We Took To The Woods as a gift. It's considered rather quotidian to an educator in Maine, I'm sure, but it was news to us and immediately gained a pride of place on the shelf with Twain and Bierce and Wodehouse and a few others. Everyone's always trying to get me to read things. It's a rare person that hits the mark on the first shot.

I love that book. It matters. My older child reads her history of Maine, called State O' Maine, for his history lesson. He's homeschooled. The local schools don't require students to learn about the state they live in any longer as part of the curriculum. The book's out of print, which tells you a lot about what Mainers worship these days. There's always money for a homely mural about work where all the workers are on strike, but a Maine author writing the best history of Maine, who should rank with Longfellow and White, Millay and Stowe, goes out of print. The schoolchildren play with iPads instead of reading.

I felt a bit of wry amusement to read about her trips in from the wilderness to the big city of Rumford, and know that she had to pass right through the shadow of my house on the only road into town back then. She was my familiar all of a sudden. A neighbor, dead and buried, but not forgotten.

Someone cranky and pleasant and standoffish and friendly and outgoing and solitary should live there and write books about living in Maine. Ain't gonna happen. We live in a weird world, where you have to write the book first, so you can afford the house later.

We Took To The Woods, at Amazon

Posted by SippicanCottage at 10:46 AM

Email ThisBlogThis!Share to TwitterShare to FacebookShare to Pinterest
Labels: 1930s, Bits of my life pulled out and flung on the Internet floor, Maine Family Robinson

I like the first quote a lot - heck I like them both a lot, but I wrote something similar to the first one, once:

"There are some men who seem still forever, in a good way, like the farthest they ever move is from the well to the block. Or like they live in a stern little square of purpose – never worrying, always producing. So you know where they’ll be. Some men are the kind who are always come to for something, and some are the kind who are always going. Everyone wants to be the come to. And here I am, come to you."

I also like my house a lot. But I know it isn't the house about which someone is one day going to say "he wrote his books in that house, at that desk."

Unless a better writer moves in.

Your house will be on someone's wish list some day.

I hate people asset stripping estates, houses have a relationship to their surroundings and once cut adrift they tend to wither.

Nice to meet a good neighbor, even if she's dead.

So we got your story, Mr. Sippi. What does Mrs. Sippi have to say?

Hi Andy- Thanks! But all the wishing at my house will forevermore be that the roof would stop leaking.

Hi Thud- It bothers me to see this thing carved up. It is culturally significant.

Hi Sam- Mrs. Sippican likes the book much more than I do, which is a lot. She's the one that teaches our sons out of the history book that LDR wrote, as well.

Old Tybee Ranger said...
This comment has been removed by the author.
1:11 AM

Your essay brought to mind the day in 1970 when a kind soul shared a book on cultural landscapes with me, a flailing scholar. Can't recall who gave me the book, but the author was J.B. (John Brinckerhoff) Jackson. A superb writer and master of vernacular landscape interpretation, Jackson's work gave me a new vision of what it means to live in a landscape. There are few out there these days who carry on with such skill and sensitivity. Sipp, you're well on your way to becoming one of them. And thanks for putting Rich on my reading list. For a taste of Jackson, readers can go here: http://places.designobserver.com/feature/the-westward-moving-house/27938/