I Can Work The Beatles Into Anything

So, Richard Dawson kicked the bucket. He's one of those fellows nobody much has anything bad to say about. (Parse that sentence, college boy)

I suppose everyone will remark about his turn as the host of a vapid game show, but he'll always be Corporal Newkirk to me.


His biography says he ran away from home when he was 14 and joined the Merchant Marines, and later boxed for money when the rozzers weren't looking. Then he became an actor by acting like himself. In short, he was exactly, precisely the opposite of every male child in the English-speaking world today. Let's face it. Chicks dig that sort of thing.

Well, chicks did dig Colin Emm the truckdriver's son, and he dug them right back. I think he kissed them all, sequentially towards the end, but in a big pile on the floor with Bob Crane at first. One of them was Diana Dors, who was often billed as the British Marilyn Monroe. I think that meant she filled out a bustier nicely but had crooked teeth. She married Dickie Dawson in 1959, and during an eight-year marriage, they had two sons. Both Dickie and Diana sound about as wild as one another. She was the youngest person to ever register a Rolls Royce in England, using all her ingenue bucks. And he was the guy that got busy with the only girl that Swindon ever felt the need to memorialize with a statue. She makes Jessica Rabbit look like Olive Oyl. 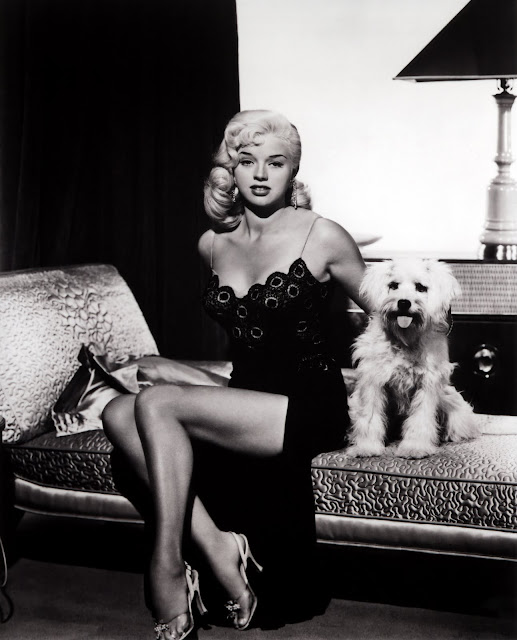 Oh yes; the Beatles. Well, if you were somebody in 60s England, I mean really somebody, you were on the cover of Sergeant Pepper's. Hell, only Marilyn Monroe's face is pasted in there, but Diana's in the front row in all her glory. 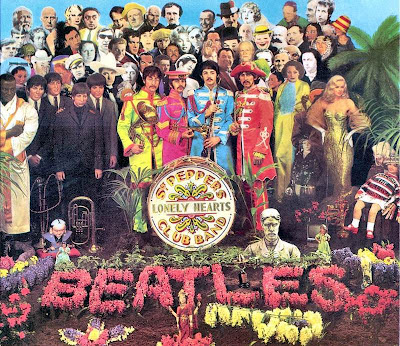 Way to go, Dickie. Only Lawrence of Arabia, if that's who the Easter Island head in front of George is supposed to be, managed to get better billing than your wife.

Like the man said: No matter what -- keep smiling. Some of that must have rubbed off on John Lennon; he smiled here and there during this video, even though you could tell he was thinking of murdering Paul McCartney the whole time for making him sing Hello Goodbye:

Posted by SippicanCottage at 1:36 PM

Diana Dors is still fondly remembered by many Brits, even in later years with her beauty long past she was still a real attraction.

You know you're my number one Liverpudlian, don't you?

but I never quite got John Lennon, but apparently Yoko did -- which is kind of inexplicable... as well.

I think I read somewhere that someone was updating that album cover with "current" people.

Eh. I'm old. I'm still trying to figure out why I would want to Twitter.

Though the Beatles "looked" amazing in this brief film, this was a totally wasted use of their efforts once the record was set spinning. No attempt to lip-sync correctly and Lennon practically yawning throughout makes me wonder if the boys were forced to "do something" by contract only. On top of that, the song was pretty lame, too. I read that John once dismissed Paul at his doorstep wit the phrase, "Yer all fairy tales and pizza." As ever, Ringo was the enthusiastic and happy employee. He probably couldn't believe where he was working.