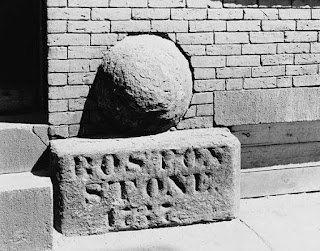 So very young. I think I remember this and that. Dad turned the big, silver knob and the Temptations stop. There was a chainlink fence aged to a coppery color, undulating its way down the heaving and spidered sidewalk. A bread truck in the drive.

It was Christmastime. You lifted the yoke on the gate and fumbled to close it. A few steps, a few steps and onto the porch. It was closed in, but left cold. There was a Christmas tree. It wasn't real. There wasn't an insinuation of real about it. It was silver. It was Christmas with the Blessed Virgin Mary in a miniskirt. There was a light pointed at it with a revolving lens of four colors slowly grinding around. There was fake white arcs of snow sprayed into the corners of the windowpanes. The patches of real snow outside were brown.

Then the door opened and it was instantly loud and close and hot and wonderful. There were kisses on the forehead with a hand on both cheeks, warm and damp from cooking. There was a comical handshake in a haze of Tiparillos. A big post stood sentry at the foot of the stair, and halfway up there was a colored glass window. Who could think of such a thing in your house instead of in the church where you dared not turn around.

They had a parlor instead of a living room, and a room to eat in and nothing else. Or maybe it was her sister. They were all in the same place at the same time and it blends things together in a small mind. The chairs groaned with even my little weight. The table groaned with the food. Everyone was in the kitchen and it was as bright as a beacon by the shore in there, and the light crept out into the hall like a puddle. The phone rang and rang and sounded different.

There was football of all things on TV, from places I'd never go. The men drank from cans with two perfect triangles punched in them, one slightly larger than the other. After a while they played cards and laughed at one another's jokes.

When it was over she had a name for me that others didn't. I was nothing but her brother's son but that's enough I guess. She put a whole quarter in my hand and kissed me. I hear that name again, in her voice, though it is no more. I'll tote it around in the sack of my heart forever.

Posted by SippicanCottage at 10:15 AM

Email ThisBlogThis!Share to TwitterShare to FacebookShare to Pinterest
Labels: 1960s, Bits of my life pulled out and flung on the Internet floor, Boston

Sippican - Thanks once again - your flash fiction always brightens my day.

Hi Derek- Thanks for reading and commenting.

I'm afraid there's no fiction in it.

That makes it even better!

funny how time warps the glass we view our memories through.

Hard to remember childhood. Until you read this.

The triangles in cans! Those are banned now.

When you can take a scene like that -- describing it, from a reader's standpoint, like it was just working class, a space packed and suffocating, uncomfortable by today's standards, almost crass -- yet leave your readers with nothing but envy that you were once a part of something so genuine and human, a real American family bursting with vitality and tenderness. That's magic.

I have a picture of that somewhere. Thanks for reminding me.