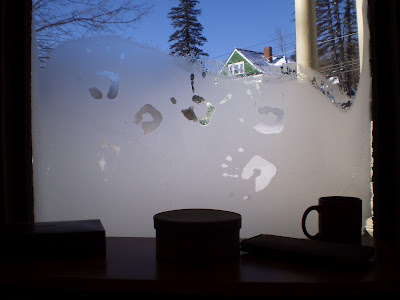 We've lost our power three times in the last day or so; once so the power company could replace the pole that has the drop to our house on it, twice because it snowed eight inches last night and made the utility world go flibbertygibbet for a spell.

I had to sit shiver all night over the stove. When the power goes out, the fan doesn't run and it overheats. It smells like a tire fire barbeque a bit when it gets too hot. You have to close all its dampers and watch it. I had to open a window at two AM to get some fresh air, and made a fire in the living room fireplace to exhaust the place, and get a little warmth. The former occupants of the house never took care of the fireplace, and actively broke it here and there, too, for practice, I guess. I had to watch the fireplace even harder than the woodstove, lest it pull a Miss Havisham on me and let a log roll out. The power was restored before dawn, and then shortly after winked out, and I had to go through the whole rigamarole again.

I fell asleep around eight this morning while sitting somewhat askew on the couch. My little son came downstairs and stood as quietly as an eight-year-old can stand, which is similar to how quietly an organ grinder with a rhino instead of a monkey might keep silent, and when I opened one eye, he said, " Wow, dad, you're finally awake."

Yes, son. Finally.
Posted by SippicanCottage at 11:43 AM

Don't worry that the sleep was lost. It came over to this side of the continent and I used it to extend my usual sleep from six hours to nine. Then I lent the sleep I had left to my neighbor.

Pull my finger, I'll send some more stuff over.

The Spare went outside and slid down the hill into the back yard on his flying saucer all morning, and it was meet.

I obsess about having enough wood for winter fuel, i even took note of you burning cardboard for the extra therms...you started this!

flibbertygibbet - I thought I was the only one that used that interjection...stay warm, my friend (rubbing it in just a bit - 70+ here in loverly Glendale, CA).

I have an eight year old who is as quiet as a garbage truck, and that is when she is silent. Ha. Get some rest. That made me smile.

Thanks for throwing in the arcane reference from Dickens' Great Expectations. It's a delight to be reminded of such a great book. We hardly come across Pip, Estella, and Miss Havisham references anymore... "Heaven knows we need never be ashamed of our tears, for they are rain upon the blinding dust of earth, overlying our hard hearts. I was better after I had cried, than before - more sorry, more aware of my own ingratitude, more gentle. If I had cried before, I should have had Joe with me then.
So subdued I was by those tears, and by their breaking out again in the course of the quiet walk, that when I was on the coach, and it was clear of the town, I deliberated with an aching heart whether I would not get down when we changed horses and walk back, and have another evening at home, and a better parting. We changed, and I had not made up my mind, and still reflected for my comfort that it would be quite practicable to get down and walk back, when we changed again. And while I was occupied with these deliberations, I would fancy an exact resemblance to Joe in some man coming along the road towards us, and my heart would beat high. - As if he could possibly be there!
We changed again, and yet again, and it was now too late and too far to go back, and I went on. And the mists had all solemnly risen now, and the world lay spread before me."