Honey Bodger Doesn't Give A Shite

A bodger is a woodworker that makes chairs out in the woods. The term is being debased or resurrected, depending on your outlook, by the Internet, where many use it instead of the term "jerry-rigged." It refers to a perfectly serviceable ad-hoc apparatus.

These men work the wood "green." Then they air dry it. They are making Windsor chairs. The British invented the Windsor chair, and the Americans perfected it. Here's a British one, with the wagon wheel back splat like of the sort being fashioned in the video: 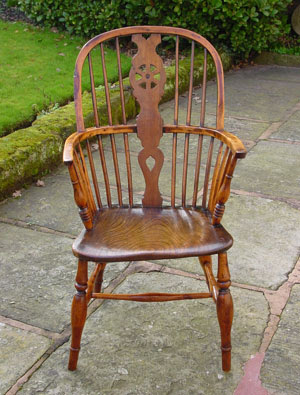 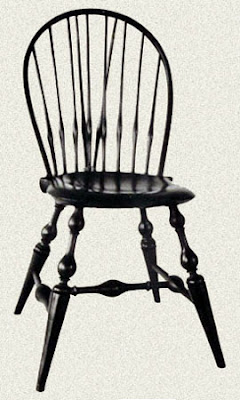 Here's a reproduction of an American colonial chair. Wallace Nutting was a collector of American furniture, and was more or less a founder of the Society For The Preservation of New England Antiquities. He had a falling out with them because he wanted to make money, so he went his own way. Now the SPNEA are money-grubbing like everyone else in this world. Nutting died in 1941, and his businesses are just a memory, and he's ever so much more influential than the SPNEA will ever be.

He had a fairly large business hand-tinting photographs in a factory in Framingham, Massachusetts. (According to this, he sold close to 10,000,000 of them) He wrote lots of books, mostly about furniture and furnishings. After a while, he started making reproductions of the furniture he had collected and cataloged over the years. It's hard to make money in the furniture business, and Nutting was no exception, but he made nice chairs. His reproductions are worth a small fortune at auctions now.

Here's his description of the #301 shown here:

"Unadorned in its simple, rugged beauty this true Windsor Chair is indicative of early Colonial sincerity. Honesty of purpose and a determination to excel are apparent in this chair as in all Wallace Nutting craftsmanship. Exact throughout in construction and design this Early Bow-back Braced Windsor is reproduced in the same chosen woods as the original - a combination of selected pine and birch or maple; it weighs but nine pounds."

Honesty of purpose and a determination to excel. Hmm. If you ever find that, better take a picture of it. It's as rare as a bodger these days.

Related: Hitting Rockbottom With Wallace Nutting
Posted by SippicanCottage at 11:17 AM

Every woodland over here seems to be home to some ex crusty self titled bodger, given the number of them I'm hoping that at least a few will make the grade if only making willow and hazel hurdles.

Hi Thud- Thanks for reading and commenting.

All this before CAD. The man-propelled lathe kills me.