Open Is A Time 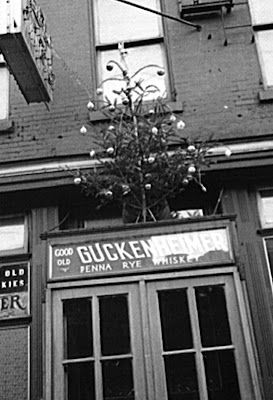 I WISH IT WOULD rain. No. Sleet. Sleet would finish the scene nicely. Rain is God’s mop. It washes away the dirt and corruption. I’ve got no use for snow, either; the fat flakes are too jolly. Snow makes a fire hydrant into a wedding cake. I want sleet.
I’d rather pull my collar up and hunch my shoulders as if blows from an unseen and merciless boxer were raining down on me. I don't want a Christmas card. I want the Old Testament.
Old or new - I knew it. Father and mother would open the Bible to a random page and place an unseeing finger anywhere and use it for their answer to whatever question was at hand. They'd torture the found scripture to fit the problem a lot, but it was uncanny how often that old musty book would burp out something at least fit for a double-take. But any Ouija board does that, doesn't it?
It was just cold and bracing. No sleet. I didn't need to be clear-minded right now. Paul's tip of the hat to the season, a sort of syphilitic looking tree, hung over your head as you entered the bar like it was Damocle's birthday, not the Redeemer's. It was kinda funny to see it out there, because inside it was always the same day and always the same time. Open is a time.
People yield without thinking in these situations. It had been years since I had found anyone sitting on that stool, my place. It was just understood, like the needle in the compass always pointing the same way for everyone. Paul never even greeted me anymore, just put it wordlessly down in front of me as I hit the seat. Some men understand other men.

It was already kind of late. My foreman said for all he cared, I could bang on those machines until Satan showed up in the Ice Capades, but I didn't feel like working on Christmas Eve until the clock struck midnight. That's a bad time to be alone and sober.
"I'm closing early tonight," Paul said, and he didn't go back to his paper or his taps. He just stood there eying me. I took the drink.
"You've made a mess of this, Paul," I stammered out, coughing a bit, "What the hell is this?"
"It's ginger ale. You're coming with me tonight."
I could see it all rolled out in front of me. Pity. Kindness. Friendship.
"No." I rose to leave.
"You'll come, or you'll never darken the doorstep here again."
Now a man finds himself in these spots from time to time. There are altogether too many kind souls in the world. They think they understand you. They want to help you. But what Paul will never understand is that he was helping me by taking my money and filling the glass and minding his own. It was the only help there was. A man standing in the broken shards of his life doesn't have any use for people picking up each piece and wondering aloud if this bit wasn't so bad. They never understand that the whole thing was worth something once but the pieces are nothing and you can never reassemble them again into anything.
I went. Worse than I imagined, really. Wife. Kids. Home. Happy. I sat in the corner chair, rock-hard sober, and then masticated like a farm animal at the table.
Paul was smarter, perhaps, than I gave him credit for. He said nothing to me, or about me. His children nattered and his wife placed the food in front of me and they talked of everything and nothing as if I wasn't there – no, as if I had always been there. As if the man with every bit of his life written right on his face had always sat in that seat.
I wasn't prepared for it when he took out the Bible. Is he a madman like my own father was? It's too much. The children sat by the tree, and he opened the Bible and placed his finger in there. I wanted to run screaming into the street. I wanted to murder them all and wait for the police. I wanted to lay down on the carpet and die.
"Ye are the salt of the earth; but if the salt have lost his savour, wherewith shall it be salted? It is thenceforth good for nothing, but to be cast out, and to be trodden under foot of men. Ye are the light of the world. A city that is set on an hill cannot be hid. Neither do men light a candle, and put it under a bushel, but on a candlestick, and it giveth light unto all that are in the house. Let your light so shine before men, that they may see your good works, and glorify your Father which is in heaven."
He put the children to bed, to dream of the morning. His wife kissed him, said only "good night" to me, and went upstairs. We sat for a long moment by the fire, the soft gentle sucking sound of the logs being consumed audible now that the children were gone. The fire was reflected in the ornaments on the tree. The mantel clock banged through the seconds.
"Do you want something?" he asked.
"Ginger ale."

(From my collection of flash fiction, The Devil's In The Cows

Email ThisBlogThis!Share to TwitterShare to FacebookShare to Pinterest
Labels: holidays, The Devils In The Cows, winter

One of my favorites.

Merry Christmas and a very happy New Year to you and yours, Sipp, and to all of your readers as well.

I don't want a Christmas card. I want the Old Testament.

Worth quoting - have a Merry Christmas, Sullivan family!

FanTAStic! Exactly what I needed to read today especially.

Merry Christmas, Sipp, to you and your wonderful family. Touching story, thanks.

Merry Christmas, Sipp, wishing you many blessings in the new year.

Merry Christmas to you and yours sipp and thanks for this last years illumination andlaughs.

Merry Christmas. And thanks.

I think this is my favorite story. Tonight one of the girls was sitting by the tree reading your book. And really getting into it.
That was a picture I wish I'd taken. There's nothing like the sight of a pretty young lady reading a book you've written to make your holiday even happier.

I loved this story in the book. I still love this story.

Merry Christmas, Mr. Sullivan, to you and yours.

If you carpenter half so well as you write, you undoubtedly make some mighty fine furniture.

Razorbacker in the hills.

> A man standing in the broken shards of his life doesn't have any use for people picking up each piece and wondering aloud if this bit wasn't so bad.

That is, without a doubt, the best single sentence I've read this year, and perhaps for several.

Merry Christmas to you and yours, Sipp.

This was altogether lovely.

I hope you all had a Merry Christmas, and will have a very Happy New Year. You are all very generous with your praise and support and friendship and I'm grateful for it.

Asked for and received your book for Christmas. Read the whole thing in one sitting. Could not put it down!! Thanks for making my Christmas season so much better. And have a wonderful New Year!

Hi Dr. Dave- Thanks for that. I hope you and your family have a very Happy New Year.