The Vice-President In Charge Of Trefoil 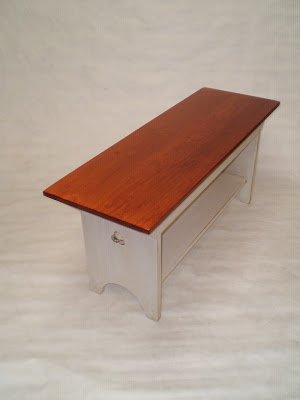 Still some wicked cool benches left over at Sippican Cottage Furniture's Ready To Ship page. They're all very nice, but none as nice as this one.

My little son is eight. He "helps" me in my workshop. He's fond of earning a quarter by vacuuming the floor, for instance. He gets an equal amount of dust on himself and into the vacuum, but either way it's not on the floor anymore.

An eight-year-old is prone to flights of fancy. He's as likely to ask you if we could vacation on Jupiter as anything more mundane. The world is full of possibilities for him. There's very little world in the rear-view mirror to discourage him in any way.

In a lull in the dust fighting, he looked at me in a way I'm  accustomed to seeing just before some sort of trouble. It's usually followed by a request for us to make a ray gun with a paper towel tube and the hot glue gun. It wouldn't be so bad except that he expects it to actually emit some sort of rays when we're finished, or it's a failure. He hears not now too often, as I work most all the time at one thing or another.

"Why don't you put a shamrock or a heart on your benches, dad, like you do with your steppers? It would look nicer, and then you could sell them for more because they're better and you could pay me for inventing it. Then I'd have lots of money and could buy a Bionicle."

I began to disabuse him of this notion as a wild flight of childish fancy and impractical and daddy's too busy to...

Then I stopped and realized it was a bona fide good idea, and made one. If you buy it, the kid gets 10 bucks, and I probably won't get my floor vacuumed again for the forty weeks worth of quarters that represents. 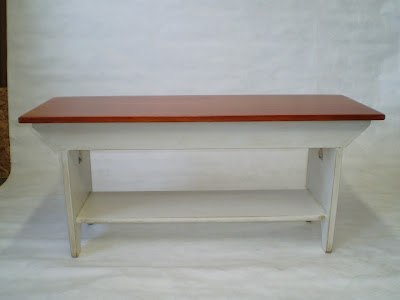 BUY IT FOR THE BOY.

Thanks for letting me go all caps this morning.

By golly, you ARE smarter than you look.

Can you post a picture from the front? I would like to see if the bottom board could be used as a shelf for shoes.
Thanks

Hi anon- Sure, just take a moment. The bottom shelf is 9" wide, and has a rounded edge, and is perfect for shoes.

Hi Harriet- Thanks. Always nice to see you in the comments.

I have a tendency to discount regular old intellect. The little feller really does have a sort of see-around-the-corner-kind of mind.

You are ruining him for the new world order: ideas+hard work = reward, self satisfaction, and even self esteem.

All to easy to fall into "not now" I'm working hard to diminish the frequency less I regret the lost time.