That Glorious Song Of Old 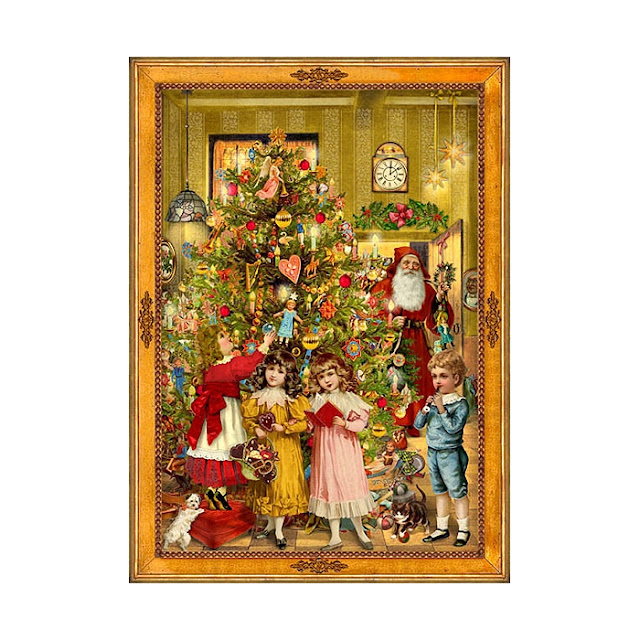 Over there in my ramshackle blogroll thingie, you'll find Daughter of the Golden West. There aren't enough blogs like that on the Intertunnel. Or people like that on the planet, now that you mention it. It's pleasant, and it's location specific. If I need a dash of Southern California, I go over there and get a fix. One of the greatest services a blogger can perform is to simply depict what's outside their windows. I used to live a few hours north of there, and I miss it sometimes.

The Daughter and her daughter have a business. They sell vintage Christmas ornaments and assorted other Yule swag at 32 Degrees North. They sent my sons Advent calendars. Marvelous.

When I was young, such things were rampant. We had little caroling books --and used them-- and made garlands from strips of construction paper and wreaths from computer punch cards. We hung up those big, garish Christmas lights with red, orange, blue, and white bulbs, on the tree outside the door. We wrapped our front door like a present. We had fake snow in the corners of the windows. We favored all sorts of things we don't see much of now. In many ways I feel as though my life has been thrown back in time. Because we didn't have very much, we had to take a bit of time and care with everything. Little trifles become more memorable that way. It's certainly like that for me again.

My little son has a very orderly mind and likes calendars and lists and thing of that nature, and he's quite taken with his Advent calendar. We're quite taken with him, of course, and grateful to people who are kind to him and his brother.


O ye beneath life's crushing load,
Whose forms are bending low,
Who toil along the climbing way
With painful steps and slow;
Look now, for glad and golden hours
Come swiftly on the wing;
Oh rest beside the weary road
And hear the angels sing.

Posted by SippicanCottage at 8:57 PM

Ta for pointing the site out, I'llbe buying some of their cards as they remind me of rather pleasant christmas holidays of my youth. Advent cards filled with Cadburys chocolate are a tradition that I can't forgo.

Christmas dissolves our boundaries and imprints us in our youth with warm memories of even the simplest events and kindnesses. I too am thankful for the kindred spirits, and for Sippican Cottage as the nexus for our celebration.