Tear The Roof Off The Sucka

The big, brown stains bloomed on my son's ceiling while half the rain still remained in the sky. The wind wasn't much, but it was enough. Attention must be paid. The next one would rob us of our second floor. 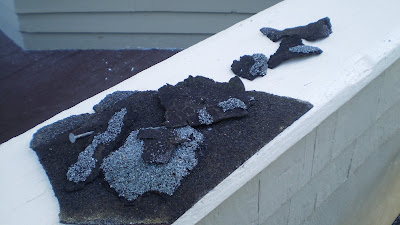 The ground was covered with this sort of thing. I know the evidence well. A house neglected while the calendar repeats itself. Not the months. The centuries. I knew the roof was a horror when I bought the place, and fixed the worst part right away -- where the rain had pulled up a chair in the kitchen and lingered over coffee, as difficult to banish as any lonely neighbor. The squirrels came and went through the holes, and fought a valiant rearguard action against the dying of the sky in their world. I was as merciless as any dread god, and had to be. I murdered them all and my eyes watered for each one. Such is real life. 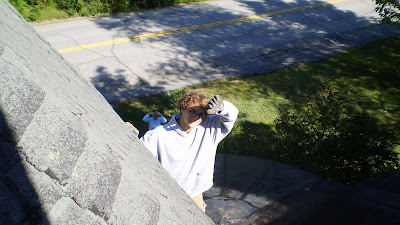 I had to go up to a spot that's not visible from anywhere on the ground in any direction. There's an octagonal turret on my Queen Anne with a squared-off dunce cap roof for my older boy's room. The roof didn't look good or anything where you could see it, but really steep roofs don't need to be very good -- that's why thatch worked, more or less, before we unleashed the wonder of shingles on the crown of our houses. But I live in a house that the former owners had shingled inside. One must be prepared to find foolishness everywhere. 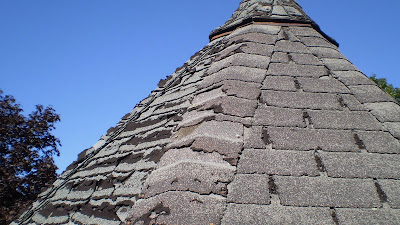 The back of the roof, away from the street. I crouched in the somewhat complex valley betwixt the main, hip roof; a large cross-gable; and the turret. On my right was three or four layers of roof, gone to various states of reward in the roofshingle afterlife, and on my left was 1901, the first roof the place had ever had, never even attempted in the intervening century because it's deuced difficult to get to. 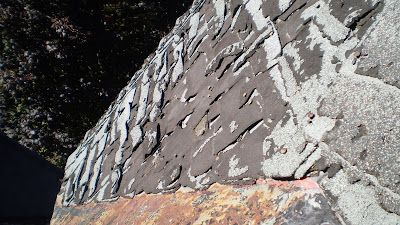 As I said, attention must be paid. I was a good manager in my past, better than my circumstances might indicate. No one I've met is a good manager. You must become one, as fast as you can, before the world and all its people run you over like a dog in the street. The very worst managers tell the people they manage to stand still while they figure something out. It is the mark of the bad manager breed, generally; coming soon...

I am not young any more. I have a bad back. There is a great deal wrong with my feet. I am still a bit feebler than I'd like to be from a bout of Lyme disease. All my neighbors, the nicest people I've met in this world, no exaggeration, passed by and told me to be careful up there, fearing that I might fall, never suspecting that if one of the bees buzzing around the chimney took umbrage I'd die right there without ever making it back to the top of the ladder, never mind the bottom.

I don't care. Attention must be paid. I'm alive; right here, right now.  Are you? Or are you waiting for your manager to make up his mind? 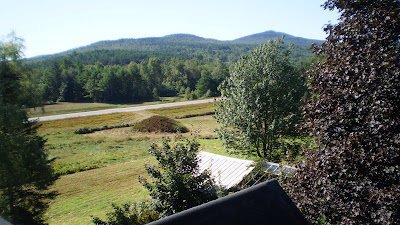 Posted by SippicanCottage at 7:56 AM

Yikes. Glad you are safe...

I don't have a manager, but I pay a lot of taxes anyway to someone who manages me more than I like.

Favorite line from this post: "One must be prepared to meet foolishness everywhere."

Things are worse somewhere. I think of your 1901, while I tend to the wrongs committed in 1985. Thirty feet up the gable end, with twelve feet of cement siding in one hand, a hammer in the other; where's the damned level? Down on the ground again, where all the sensible tools are. On the way down, the creaking knees sing "things are worse somewhere".

John Lien said...
This comment has been removed by the author.
12:06 PM

I'll be gluing SnoBlox on my roof this weekend in solidarity. The roof is a whole lot scarier than it used to be now that I'm older and less flexible.

You going to leash yourself to your roof?

You need to see it not as a chore but a refuge...

"When this old world starts getting me down
And people are just too much for me to face
I climb way up to the top of the ladder
And all my cares just drift right into space
On the roof, it's peaceful as can be
And there the world below can't bother me
Let me tell you now..."

I finished work up ladders dodging wasps and I've a feeling it will be one of the first jobs to tackle upon my return as winter awaits and I've a roof to get in order....lucky arn't we?

Thanks for the pictures from up on the ladder because, "Attention must be paid."

Your 1901, Matt's 1985, and my 2008. been trying to chase down the right bloody ballast and the right bloody non-ballasted CFC for my front porch light for almost two weeks. Apparently, after 3 years, my city-mandated-eco-friendly-yet-high-mercury fixtures are obsolete, and by god, don't break one, I just heard the story of the lady who called Home Depot to ask how to clean one up. Answer: city Haz-Mat and a $2500 invoice.

Regarding your penultimate question: Does "reading the internet" count as alive? Not the sort of thing that can be determined with an internet poll.

" I just heard the story of the lady who called Home Depot to ask how to clean one up. Answer: city Haz-Mat and a $2500 invoice."

Why do you think their passing out those teeny-tiny "Organic Waste" recycling bins? So you can hide the mercury and toxic metals under the dog shit.

I will get to watch someone else do mine because we are making modifications to our house so that we can do what civilizations have been doing since Adam and Eve.

Taking care of the parent we have left.

stay safe, make sure a can of instant death is at your side (in a pinch spray carb or brake cleaner works and they die in interesting ways), and the rental of a 70 foot snorkel is worth the interest to pay off the loan.

Roof repairs are never pleasant; especially if you make the repairs. My experience tells me that the best advice I can give is to buy a lottery ticket and hope to win. It could make life much easier.

Wait, you can't just throw out "shingled inside" without further explanation. I have seen some stuff, but I have never seen that. One of my houses was owned by a guy who used to saw off molding using a chainsaw, from the looks of it, square, sort of, then nail it next to another piece, on an outside corner. He didn't know you could buy a saw with more than 1 tooth per inch _and_ saw an angle cut. But I never saw shingles inside.

Maybe, for the sake of clarity, that should read "I have never seen" shingles inside.