"The Devil's In The Cows" On Sale Now

The Devil's In The Cows is a collection of 37 of my best flash fiction stories, edited, expanded, and just generally given more oompah and whatsis and shizzle.  It's available in paperback for just $11.95.

My method is simple. I look for a picture, chosen at random from the Library of Congress, and write a story about the impression it gives me. A kind of Internet Truth or Dare, with the dare first, and the truth later. I write each one in the voice of the subject.

Here's a free sample, 2.7 percent of the book, and the reason for the title: The Devil's In The Cows 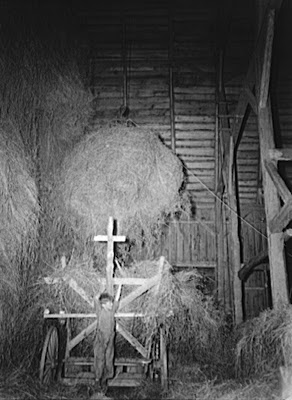 I TOLD THAT boy, I told him. You don't want no part of this farm, nor another. A farm is a jackplane for human boards. Wears you out like a sermon.
It made ma mere old, and his mother, too. She was beautiful once. Gone to seed, now. The work wore at her. Not the work, no -- getting nothing for the effort but chapped grinds a person down. A farm is a twenty-five hour timeclock with no paycheck. She done it for me, and I done it for the farm, and for pere and ma mere, but it dies with me.
It's a terrible thing to raise your own to disown you. The girls was no trouble 'cause all girls like frilly things and a farm is a dreary place. First magazine comes into a farmhouse with pictures of socialites, and daughters is plotting an escape. The only mistake they can make is letting some local boy convince them that he’s the ticket out of here. A wandering mind and a weak back is fine for a city dweller, but it's deadly out in the landscape. The farmboys with a touch of neon about them and their coquettes generally break down and wander back before they even get to a road with two stripes on it. We sent the girls to Augusta to school, and they found fellers with ink daubed all over them and we breathed a sigh.
"It's a boy!" my wife said, "We were blessed with a boy, Xavier, and he can help you." But I already knew in my heart that it was a curse, because I loved that boy so, before he was even borned, that I could never let him like me much.
He had to see how hard life was here and so put aside a man's sneaky love for his father and go away someday.


I had to goad him from this place. That is a hard thing, my friend -- a hard thing.
My father in his turn told me all of the things a man needs to know about a farm, in his mind, anyway. He loved it so, and tried to make me love it too. I loved him, truth be told, but hated his farm. But he got rheumy and I stayed on to help and eventually I slipped him in the ground and threw dirt on him like any other seed. By then it was too late to slip the orbit.
So I shows my boy what's what, and drive him like a team from dawn to dusk his whole life. I gotta wear it out of him early. He learned everything about the old place, but it's all bad son, all bad, I says over and over. He'd keep even with me when he was only shoulder height, and I'd catch him sneaking a bed lunch for the power that was in it. I didn't know what to do with him after a while, to discourage him, for I could never bring myself to be mean with him -- never.
Then the boy comes to me and says there's a war on, father, and I'm gonna go and kill a Boche or two. And my wish is granted and I curse the genie like all men do that go for a rub expecting a free lunch.
The kids from the city will think it's a lark until they're pissing themselves in a trench, and could no more kill anyone than a kitten. That's good, and might keep them safe. But the boy’s never been afraid like that, and that's bad.
"You remember gran-pere, boy?"
"Of course, dad."
"Well, I've never been no more good to you than a Pharaoh to a Jew, but now you have to listen to me.


Gran-pere he was wise about the world. It wasn't about knowing things; any damn fool knows things, some of them true. Gran-pere could feel things. He went beyond the knowing and let himself feel things. You got to do that. It's in you, I know it, because he drew it out of me, and you're mine."
"I feel things, dad."
"No, not like that. Not moonin' over the neighbor's girl or getting angry over the radio. It's sense -- like smell or something. It's not on purpose. Laissez faire, boy."
"Dad, the train is leaving."
"I remember when I was young and we was working, gran-pere would put his nose up in the air and mutter, “The devil’s in the cows.” The sky might be dead blue, not a puff of wind, six hours of work to be done, and we'd go inside; within an hour the heavens would open up and we'd watch weather as stupefying as any ten pages of the Bible from the parlor."
"Goodbye, dad."
I saw him sit, the familiar shrug of his blocky shoulders clear as day through the glass, and then the train slowly pulled away. He didn't look back.
Oh God -- watch for the devil in the cows, son.

Buy it now at Amazon: 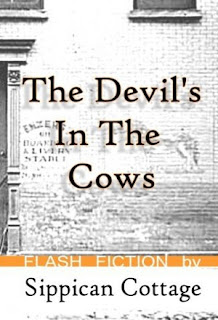 Posted by SippicanCottage at 5:10 PM

And I just finished reading the Brihadaranyka Upainshad yesterday. What a curious coincidence.

I like your writing methodology; I didn't know that was how you did it. I'd thought of something similar recently - picking an item from here or someplace equally unusual and writing a short story about it - but then a squirrel ran past my window and I completely forgot. I think your source of inspiration probably works better, anyway. But I'll have to wait for my copy of your book to find out...

I kin see I'a gonna need 'bout six pints of that thar Guckenheimer Rye Whiskey to git me thru the first bawlin' time.

I wouldn't mind if my book outsold the Upanishads. It would be ridiculous to expect to outsell the Bible, though, right?

Certainly is easier on the eye ain't it. The first time I saw the little
Sipp icon, I went looking for this. I had an idea you'd like it..

I am rifling through the couch for the extra change. It will be great to get this, and I will tell my friends when I have.

Only 11.95?
I'll read your book you magnificent bastige!

The last book I bought from a blogger was Gagdad Bob's One Cosmos. Upon finishing it, I presented it to a leftist/atheist family member who read one chapter and was convinced that I had finally flipped my lid. Of course that was the whole point of his book so...mission accomplished.

I hope your book will equally contribute toward furthering my inability in mingling with decent modern society.

Bummer on that friend, Sipp. I guess you learned your lesson by it.

Sipp, I arrive in Ca in a couple of weeks so I'll order then.

I'm gonna get a new book, I'm gonna get a new book - yippie yippie yiy aaaaa. I can hardly wait. A summer day dedicated to lovely writing and drifting into the past and beyond and weaving it into the future. I'm jumping up and down for joy!!! Thank you dear sir, you have made my day.
ps: try The Snitch, Houdini and Me, by Johnny Virgil at
15minutelunch.blogspot.com. It is a blog/book that was lots of fun to read. Yours will be different and viva la difference. love, lorraine

Hello everyone- Thanks muchly.

Westsound- Gagdad Bob is smarter than I am, but he sets his sights too low. My goal is to piss off the entire population.

Lorraine- You in particular have encouraged me to publish many times.

You've made your own bed, so now read it.

Putting in an order as soon as I can. Really looking forward to it.

Ordered mine today!! Been looking forward to this for awhile. It'll look great resting on my beautiful Sippican Cottage table!(I bought a piano bench without the piano).

Hello Arthur, and Teresa - Thanks a lot!

Our routine was interrupted by a paid gig, but finally got to place our order. Looking forward to reading it on the deck with a cold one.

Easier to Amazon on the IPhone
Looking forward to it

Anon- Thanks for buying it, and for the iPhone 411.

A couple months ago I got a look at the Intertunnel on an iPad. Amazingly clear screen image. I have no idea what my blog looks like on a handset.

I done bought mine, brother Sipp!

Thanks Jewel- Let me know how you like it when you receive it.

Hey, everybody, you can review it on Amazon, too, don't forget. Say nice things or my mother will cry.

Just so's you know, I've put up a review of sorts which may be seen here. Your wife was right.

Hi Julie- Thanks for that. I'm glad you like it.

And by the way, my wife is always right, whether she is or not.

Dang! Late to the party as usual. Just finished yer book.
As we say in Texas: Attaboy Sip, Attaboy.

All of the above applies.

Charles- Thanks for your kind words and for buying a copy.

I did leave you a good review, signed by J. Atkins (Mother Effingby). And Vanderleun...I bawled, too. Dammit.