The Most Popular Song I Ever Played 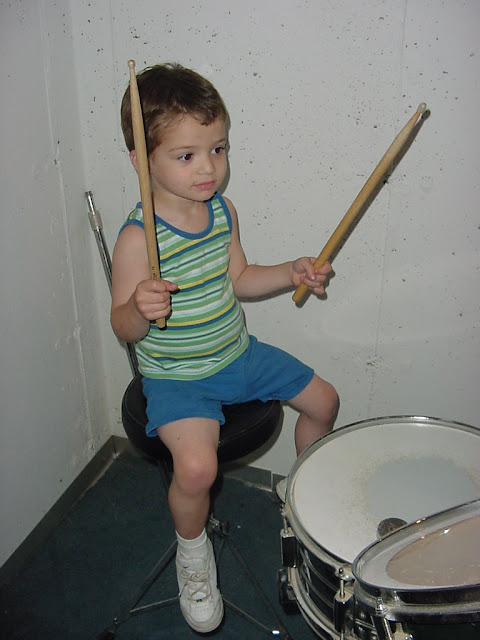 Once, about four or five years ago, I sat The Spare down on my lap at the drum set, and held his hands while he held the sticks and played a few drumbeats. Little kids are stubborn and he tried it himself. His feet didn't reach the floor, and he'd get down from the drum throne, step on the bass drum pedal, clamber back up on the seat, and hit the snare. It led to a ... languid tempo. That was it. I thought that was the end of his interest in it, but you never know with these things. We think it's better to offer encouragement than micromanage our children's interests.

Last week, out of nowhere he announced he wanted to play the drums with his brother. He sat down at the drum set and played a perfect backbeat. 1 and 3 on the bass drum, 2 and 4 on the snare, eighth notes on the ride symbol. He tells his brother, "Play Jenny, Jenny," and sings 867-5309 on the refrain while he's playing. Amazing.

My wife teaches him at  home, and suggested I start giving him a drum lesson after I eat my lunch. Okey Dokey.

First day, he sits down behind the drums and asks, "How do you spin the sticks?"

Posted by SippicanCottage at 8:34 AM

Email ThisBlogThis!Share to TwitterShare to FacebookShare to Pinterest
Labels: music, muskles, the heir, the spare

Now we know that Ray Liotta was a drummer before beginning his acting career!

I saw The Young Rascals at the Fox Theatre in Brooklyn. Probably my first rock concert. And it was there I first saw Dino Danelli spin those sticks.

When he did it with his hands in the air, it was easy to spot. But then he spun the sticks to the side in between the beats. And that was magic.

Thems was the days...

You are now officially my hero.

/before my time
//sniff

Hate to complain (yeah, sure) but I'll bet the Spare ain't banging symbols (unless they're not Zildjians).

Sabian crash cymbal, Zildjian hi-hats, and a weirdo donated sizzle ride with the rivets taken out.

I knew that kid had rhythm when you posted that bit of him dancing. Amazing what kids will do when allowed to follow their interests isn't it?

Homeschooling is the best.

Not to crowd on the hero action, but I saw them at Shady Grove, in Gaithersburg, Maryland, in '66. I was impressed with how much of their sound Felix Cavaliere was responsible for - they didn't even have a bass player, for goodness sake! But Felix was certainly up to the task.

The stick spinning was definitely a bit of bravado, which I enjoyed as a yute, and still find impressive.

Re: stick spinning
Start with the fundamentals, says Cai.