The Devil's In The Cows 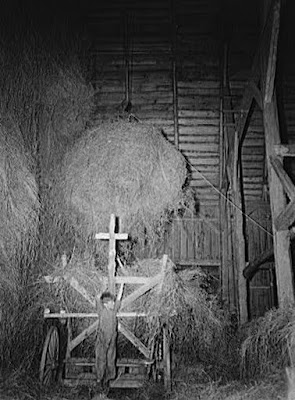 I told that boy, I told him. You don't want no part of this farm, nor another. A farm is a jackplane for human boards. Wears you out like a sermon.

It made ma mere old, and his, too. She was beautiful once. Gone to seed, now. The work wore at her. Not the work, no; getting nothing for the effort but chapped grinds a person down. A farm is a twenty-five hour timeclock with no paycheck. She done it for me, and I done it for the farm, and for pere and ma mere, but it dies with me.

It's a terrible thing to raise your own to disown you. The girls was no trouble 'cause all girls like frilly things and a farm is a dreary place. First magazine comes into a farmhouse with pictures of socialites, and daughters is planning their escape. The only mistake they can make is letting a farmboy convince them that they're the ticket out of here. A wandering mind and a weak back is fine for a city dweller, but it's deadly out in the landscape. The farmboys with a touch of neon about them and their coquettes generally break down and wander back before they even get to a road with two stripes on it. We sent the girls to Augusta to school, and they found fellers with ink all over them and we breathed a sigh.

"It's a boy!" my wife said, "We were blessed with a boy, Xavier, and he can help you." But I already knew in my heart that it was a curse, because I loved that boy so, before he was even borned, that I could never let him like me much. He had to see how hard life was here and so put aside a man's sneaky love for his father and go away someday. I had to drive him from this place. That is a hard thing my friend; a hard thing.

So I shows him what's what, and drive him like a team from dawn to dusk his whole life. I gotta wear it out of him early. He learned everything about the old place, but it's all bad son, all bad, I says. He'd keep even with me when he was only shoulder height, and I'd catch him sneaking a bed lunch for the power that was in it. I didn't know what to do with him after a while, for I could never bring myself to be mean with him, never.

My father in his turn told me all of the things a man needs to know about a farm, in his mind anyway. He loved it so, and tried to make me love it too. I loved him, truth be told, but hated his farm. But he got rheumy and I stayed on to help and eventually I slipped him in the ground here and threw dirt on him like any other seed. By then it was too late to slip the orbit.

Then the boy comes to me and says there's a war on, father, and I'm gonna go and kill a German or two. And my wish is granted and I curse the genie like all men do that go for a rub expecting a free lunch.

The kids from the city will think it's a lark until they're pissing themselves in a trench, and could no more kill anyone than a kitten. That's good, and might keep them safe. But the boy ain't never been afraid like that, and that's bad.

"Well, I've never been no more good to you than a pharoah to a jew, but now you have to listen to me. Gran-pere he was wise about the world. It wasn't knowing things; any damn fool knows things. Gran-pere could feel things. He went beyond the knowing and let himself feel things. You got to do that. It's in you, I know it, because he got it out of me, and you're mine."

"No, not like that. Not moonin' over the neighbor's girl or getting angry over the radio. It's sense, like smell or something. It's not on purpose. Laissez faire, boy."

"Dad, the train is leaving."

"I remember when I was young and we was working, gran-pere would put his nose up in the air and mutter, the devil is in the cows. The sky might be dead blue, not a puff of wind, six hours of work to be done, and we'd go in and within an hour the heavens would open up and we'd watch weather like the Bible from the parlor."

I saw him sit through the glass, and the train slowly pulled away. He didn't look back.

Oh God, watch for the devil in the cows, son.
Posted by SippicanCottage at 8:31 AM

Email ThisBlogThis!Share to TwitterShare to FacebookShare to Pinterest
Labels: Maine

Fantastic piece of writing. That is a sobering thing to do--send your son to war--and to conjure up what may be last words from your guts and deliver them with extreme eye contact. Wm .

"A wandering mind and a weak back is fine for a city dweller, but it's deadly out in the landscape."

The best line, and very true.

I'm sorry to spoil your fiction, but it hits close to truth, and so I'll tell this story.

My next farm over neighbor never made it back from WW II, but his parents did receive his Medal of Honor. He learned to shoot from the coyotes, as it were. Pfc Mann

Oh, that gives me chills.

All the best subjects.

And now my dear friend my makeup is ruined and I have to start over. My God you have a gift. My son is in the Middle East and fortunately flying a plane but there is always danger and a mother's heart beats for that. You capture the language in such a strong way that it becomes living. Thank you so much for your writing.

You know, I'd pay good money to read the words you write.

Thank you for giving it to us for free here, but I really mean it, you have a gift.

You never fail to amaze, sir.

(Does this mean you're not passing on the furniture building?)

Powerful stuff. I dasn't want to show this to any of the kids I know who I have encouraged to go into farming.

It's not a dead, or even dying art, farming. But it is hard beyond the imaginings of those enamoured of fast works and whirlwind distractions.

Farm kids MUST know what they are getting into. It's hard, challenging, filled with acres of monotony and the rewards for one's efforts are not easy to compare to flashy cars and svelte lovers in satin duds.

Keep up the excellent penmanship.

That's like fine wine which comes in three grades. Good, better and best. That Mr. Sip is "Best" ! Thank you.

A truly wonderful piece. I'd say "totally awsome" but that would be understating my appreciation.

That piece does bring up a point of observation. Many preferences that we have, need to be understood as OUR preferences, rather than universal truths. The speaker/writer in your piece assumes that his son needs to be warned off from farming because of its “jack plane” nature. I would summarize the reality as follows:
The speaker wanted to do something other than farming, while his father loved the farm. But the speaker’s son may very well have a sensibility more like his grand-pere. The speaker makes the same mistake that we all often do – we assume our preferences are more universal than they actually are.

It is hard to truly believe that we are not very close to, if not actually occupying the center of the universe. I would not be caught dead telling my friends that, but I often act on that secret assumption.

I am simplifying the meanings woven into your prose, but then again I am not Hemmingway.

A fellow named Hippocrates makes my point with all the ambiguity intact: