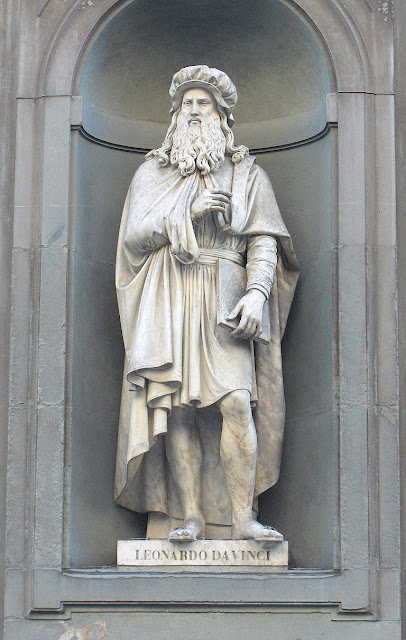 Marc Cenedella, founder of professional jobs website TheLadders.com, has tracked down Leonardo da Vinci's resume, sent to the Duke of Milan in 1482 when Leonardo was 30. 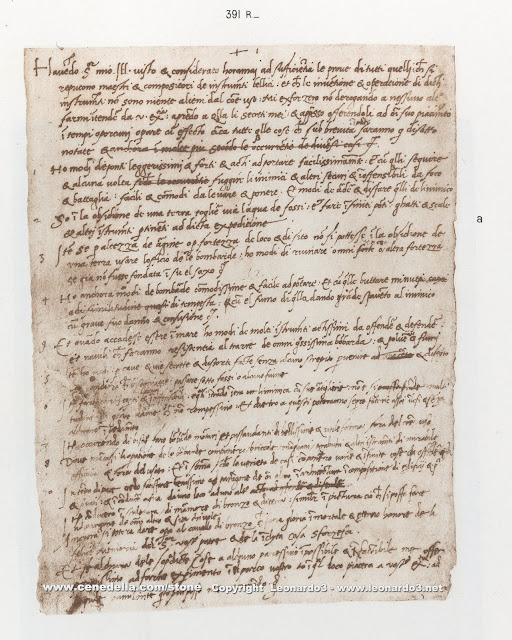 Because I'm a half-assed polymath, or maybe more like a low-budget and shabby Competent Man (I'm bad at all sorts of things, and proud not to limit my substandard efforts to one mess at a time), I always find people like Leonardo and Ben Franklin, or especially fictional characters like P.G. Wodehouse's Jeeves, to be fascinating archetypes.

It's instructive that they tend to be remoras to the big fish in this world. There's a certain amount of gravitas that bigshots have that escapes the polymath. The Renaissance man flits from one preoccupation to the next, while the Napoleons and the Washingtons of the world concentrate on their one big idea.

The dissipation of interest into tributaries doesn't help your resume much. One awkward sentence at the end that blurts out that you're married and managed to procreate and like to ride bikes or golf or something is about it with regular people. What the hell would Leonardo put down on his? I'm a terrific ballroom dancer and I'm kind to dogs. Saying you're better at everything than everybody about covers it, doesn't it?

Not really. The Duke of Milan thought --knew-- that he was the big deal, not some siege engine tinkerer that liked to paint broads that didn't quite smile, and needed a ducal paycheck to keep him in red wine and rose madder. A resume isn't about you; it's about the needs of the employer, and how you might meet those needs, and the CV monomaniac at TheLadders sees it right off: Leonardo was a hell of a resume writer, too.

What a fantastic piece of personal marketing! There’s none of his famous backwards-mirror writing here — this letter was intended to be read and to persuade.
I’m a hopeless pedantic, so of course I’m going to take this opportunity to let you know what you can learn from Leonardo’s resume…
You’ll notice he doesn’t recite past achievements. He doesn’t mention the painting of the altarpiece for the Chapel of St Bernard; he doesn’t provide a laundry list of past bombs he’s built; he doesn’t cite his prior employment in artist Andrea di Cione’s studio.
No, he does none of these things, because those are about his achievements, and not about the Duke’s needs.
Instead, he sells his prospective employer on what he can do for him.

Hmm. Not to be a hopeless pedantic --er, pedant, but the word he's looking for is pedant, he should lose the exclamation point after the first sentence, and stop using an ellipsis where a colon belongs, and stop bolding text that should be italicized. Harrumph. I'd roundfile that guy's resume.

Leonardo's resume worked, though; Ludovico Sforza hired Leonardo, and paid him to paint The Last Supper, among other things.

There's a translation of the whole thing at the site, and it makes for interesting reading. Leonardo ladles out the required ration of obsequiousness at the get-go, then gets down to brass tacks and cannons in a big way. Duke, I can make you bigger than the Beatles; gimme the gig.

Leonardo's Mona Lisa might be the most recognizable painting ever painted. Ludovico Sforza died in a dungeon. Do the (poly)math.
Posted by SippicanCottage at 7:02 AM

Sipp, you find the most wonderful things. Thanks!

Given his biography, Leonardo's rise to timeless legendary figure is even more amazing. He was an unschooled bastard child, you know.

Thanks for bringing this resume up. I have never seen it before.

Hi Julie- Thanks for reading and commenting.

Hi Casey- Some people are larger than life, ain't they?

Outstanding essay. You're the only other person I've noticed using "harumph", and with the proper stifled gusto no less. I just knew it was a word! I just knew it.

Also thanks for calling him by his name with deft precision and not risking the inaccuracy of possibly referring to Georgio, Mustafo or Antonio DaVinci--the local baker, weaver and used car salesman, respectively.

Unschooled? Wow, you certainly must be, right!?