Hey, It's Time For Pointless Lists Of Tools Compiled By People That Think Defragging Hard Drives Is Heavy Construction 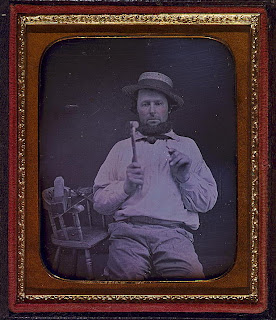 It's a shameful pleasure of mine, I admit it. I love to read lists of tools randomly drawn from a Home Depot flyer, written by people that can't write, aimed at people that don't make anything but reservations. Popular Mechanics doesn't disappoint with their: Tools Everyone Should Own. It's a terrific, haphazard mess of twenty arbitrary thingamabobs, written in the breathless prose usually reserved for paperbacks with pictures of Fabio on their cover and the tears of countless overweight data entry clerks dappling the pages.

OK, first, let's take care of the easy stuff:
Down to fourteen.
Only twelve to chortle over now.
Oh, never mind. The list is by and for people for whom it won't do any harm. Buy two of everything, including  an issue of Popular Mechanics. Think of all the fun you'll have arranging all this stuff on your pegboard. It's like Playboy; you buy it and look at it without any hope of banging on anything in there, too.


You might also be interested in: Ten Of The Eleven Of My Top Ten Tools
Posted by SippicanCottage at 9:30 AM

I think their sister publication, "Popular Grandstanding Intellectual," has a list called "20 books that look super important on your bookshelf, but you don't actually have to read."

"No one bangs framing nails by hand anymore, except maybe Jimmy Carter if there's a camera pointed at him. Get a nail gun and a Strunk and White."

I love a rant, especially a professional one. The above line made me LOL.

Ooh, and good thing they included the drill bits. I saw the drill and figured they just use theirs like I use mine - stick a whisk in it and whip up a nice, delicate meringue.

I love my maul.

Without a tape measure and carpenters pencil, the rest is just door stop and paper weight material.

You can't always get a socket on a nut, got to have wrenches too.

I thought a Framing-hammer was a person from Framingham...

I put up "seamed" aluminum rain gutters and downspouts last week, and gave both my tin-snips and center-punch quite a workout. They are my second pair of tinsnips, and I think if I did not find them useful I wouldn't have replaced them when the first pair accidentally wandered away from our house in a contractors toolbag

It is true that the cheap power miter saw with a "backwards" junk carbide blade made much faster and smoother cuts for most of the cuts, however

Restoring my Vic couldn't have been accomplished without either of these.
.

I'm with H. Gillham. I love a professional rant. I liked "so buy them three at a time". Excellent, as always, Mr. Sippican.

I thought Framing-hammer was an attempt to blame the rapper with the unfortunate taste in pants.

Love it. Brought back memories of summers home from college, working for a concrete contractor, where everyone carried an Estwing.

Everyone except for Charlie, who was a 19 year old kid from the inner city, first day on the job. He pulled out a tiny wooden hammer you might use to put up a small picture frame at home. Seeing him flail away with it, trying unsuccessfully to dislodge the pins on the back of a form, our boss (who was certifiable) ran over, grabbed it from him and screamed, "you call this a hammer?" as he flung it clear across the job site. "Here's a bleepin' hammer, son", he said, handing him his own Estwing. "Don't come back tomorrow without one."

Sipp...I have a post up that may interest you.

I love this fisking more than I love the dream of an Obama recall.

That's a schmo at the beginning and a know-nothing Yahoo intern chopping at the end.

Go easy boys and girls. PopMech is just cotton candy for yuppies, the boys trying to make a buck selling drivel. I'm sure they know it's drivel. Willing sellers and buyers, it's all good, right?

Imagine the pain of the editorial meetings where they sit around, trying desperately to find some new slant, some new approach, to the hand tools, some of which have been around for 'millenniums'. Then, in despair and desperation, some victim is assigned the odious task of yet another 'List of the Best'.

Read between the lines. The poor man was entirely and righteously drunk when he wrote the piece.

I was on a residential construction site once, 40 years or so ago, and they hired a new guy. I forget his background, other than "terminally clueless". He had been told to bring a hammer. He showed up with a ball peen hammer. Close, bub, until you have to pull a nail.

2 screwdrivers. 1 medium size phillips head (a puppy chewed the end off) that's good for appliances and computers. 1 large regular type that can also be used as a small pry bar and won't bend.
A not so heavy hammer because I'm a girl.
Duct tape. The waterproof kind.