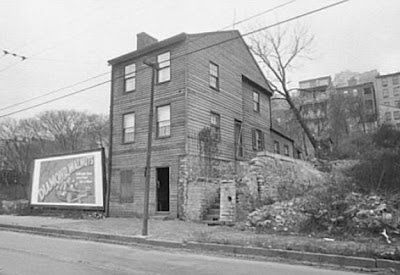 I don't know how many times I trudged up that hill with his lunch. Mother said he was kind to us when we needed it, so we need to look after him now that's he's alone. Me, I just do what I'm told.

I didn't know what to call him. He looked even older than he was, and he was nothing and nobody to me. He sensed it. He seemed to know everything although he never went out.

"Everyone calls me Tommy Walnuts."

OK, then. I'd sit in the milky sunshine next to the cobwebby window and watch him eat, while the cats - his cats?- the cats did figure eights through his legs. In all the time I was ever there I never saw him show the slightest interest in those creatures, but they hung by him like he was their mother. It was like he was the sun they orbited.

He never spoke while he ate. He'd murmur or grunt if you asked him a question, but shoot you a sort of withering look that made you refrain from asking another. When he was done, he'd take out a tin of tobacco and make himself a cigarette, and he'd smoke and he'd turn his eye towards yours, and it was like a signal that you could ask him something. He never asked me anything, except: How is your mother?

I can't explain what that man knew, because he seemed to know everything. I'd go to school and the nuns would try to pound the numbers and the words and some sense into my head. It took a lot of hammering; at least at first. But then I had a mission. I wanted to ask this man something he did not know. I'd read at recess and at home and I'd sit in the library like a girl and scan the pages looking for the thing Tommy Walnuts would not know. I couldn't find it.

How long is the Great Wall of China? How do you calculate the hypotenuse of a right triangle? Who was the third vice-president of the United States? Did you know the Titanic had a sister ship?

"Two," he said, and send me home to scour the shelves again.

One day he looked rough. He always looked old and beat, but he seemed sick. He coughed a lot when he smoked.

"Are you all right?"

"I am always the same. Makes no difference. Ask your questions."

"How did you end up all alone here?"

He took a long drag on the cigarette. He looked around the empty room like a man on a stage surveying the audience before delivering his line. It was the first time he had ever even paused before answering me. I heard the clock tick, and the soft indistinct sound of a cat purring under his chair. A car sizzled past on the wet pavement outside.

He looked at me differently than before. I was sorry I had asked that. I'd gone too far. I was losing so I upset the board.

Tommy Walnuts knew everything.
Posted by SippicanCottage at 8:09 AM

more about him, please.

I believe you just made my day, Sippican.

You are one of the people I have come across in my life that make me wish to win a huge loto. I have never wanted to win for myself. My desire has always been to find those I could fully support so they could do what I want them to do - in your case - write. I would you to only have to pick up saw and hammer for pleasure and to only write to please me. You would have very little time for the hammer and saw. The children and wife would be well provided for as well. I am still waiting for the novel of the handyman confronting the most beautiful woman in the would and then from there skies the limit. Love all you write. I tolerate the videos but love the writing. Thank you for squeezing in the time you do - even the oldies but always goodies. ps - you would never even have to meet me.

Lorraine- That's a lovely sentiment, and I'm grateful for it.

If Daphne didn't like it, it wouldn't be any good.

Jean- I'm always conflicted by the format. Tell a whole story in 600 words. You think maybe you could string it out into something grand, but maybe the 600 is enough. I don't know. I know I don't have any time to worry about it, or do it.

A gem. Thank you.

Love your flash fiction. I've never heard of it before and I'm telling friends about it. You know, another writer could take up your flash and expand it, just as a friendly exercise.... Jean?