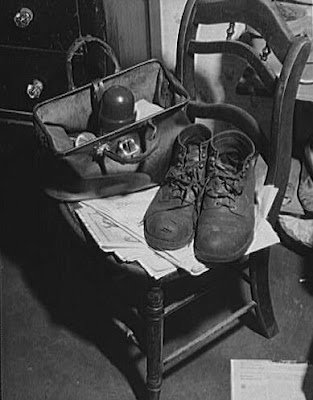 I felt like someone a few minutes after a punch in the face. The sting's gone out of it, but you're dizzy, like, or something. Everything's blurry around the periphery; you're looking through a kind of tunnel at one thing or another, but each standing in a line, a sequence. It doesn't knit itself into a whole for you. Was this fellow speaking German to me? I speak German. That doesn't mean anything.

Dad's dead, in some strange place among strange men. He wasn't even here when he died. The timber and the blueberries and every other damn thing they did to keep body and soul together around here played out and dad breathed his last on a rusty boat dragging what-all to god-knows-where. They sewed him in his canvas bag and slipped him in the ocean like a card trick.

I never understood that whole wake thing until now. Your loved one made up by some insane hairdresser and laid out like a buffet of sorrows in the parlor. People who hated the stiff, dropping by to make sure he's dead and to say what a lovely specimen he always was, the words turning to ashes in their mouths to save your ears the trouble. You just stand there bewildered. A month later you'd take your own life or join the circus or weep while watching What's My Line. You're just numb when it's fresh in your memory. Human nature comes with its own novocaine, but those teeth are coming out. Hard. It's an odd and disturbing tug at the point of attack; the ache comes later. But at least now I see why you want to see the husk a last time. I'm not sure if you pinch the corpse or yourself to gauge who's alive and who's not.

Well I was at the point where you can't help yourself; you probe the hole over and over with your tongue where the molar came out, each time only half-believing it's gone, wondering if you'd have taken better care of it maybe it'd still be there. It doesn't hurt, really; it's tender and offers a sort of mute reproach when you touch it. So here I am, up from Boston, the closest civilization, but not close at all, and I have questions no man alive can answer for me.

I could hear the French in it now. Not like France French. I've met Algerians and Vietnamese and people from the Caribbean and when they speak French it sounds like Paris. This fellow is Canadian French. His accent sounds like a wild animal passing a poorly-digested hiker out in the woods. He is, like everything here in Northern Maine, barbarous.

The French fellow slunk back into the rude sort-of dormitory we were in, and this other voice presented himself. He was tall and rangy and a little dirty; compared to the little bearded homonculus prone to the German-sounding French grunting, he looked and spoke like a Roman senator. He was as self-possessed as the other fellow was chary. No one introduces themselves here, I notice. They seem to know what everyone's about, without asking, and speak to you as necessary and no more. If they don't know you, you don't belong here, and it's but a moment's work for them to figure out what your story is. Who else would hover at a dead man's empty bed in a lumber camp?

"What language is that? What does that mean?"

There was that languid pose all these men have around here. There's a blank look you can't make out any emotion in. You start to imagine all sorts of thoughts that it might signify, because it's so blank, and lasts for so much longer than polite society would allow, it might mean anything. He might think you a fool or a king. Or maybe's he's not thinking about you at all. Dad was like that, what little I knew of him. Impenetrable.

"It's not any sort of language a man would know unless he needed to know it. It's his stuff. Stuff a man keeps 'cause he can't bear to part with it, but knowing in his heart it's worthless. He can't leave it out and about or it would be thrown away in the trash by anybody else. So he puts it in a little spot near the midden he sleeps in, and no one touches it, and pretends not to notice it, neither."

And there was a fly tied for a fish that would never see it; a compass without a needle; a few dog-eared books too tired for the library; not much really -- a few bits of broken this with a missing that. And a wedding ring with no finger in it and a picture of me.
Posted by SippicanCottage at 7:32 AM

In my dreams I am amused by becoming moderately successful at a thing I love to do, and being asked how I arrived there. What were my influences, they'll want to know (they always do).

When it happens for real I will answer with a question: "Have you met The Sippican?

"... laid out like a buffet of sorrows in the parlor."

Beautiful imagery. It's going on the whiteboard in front of my students tomorrow.

Haven't seen words used like that hardly ever, maybe never.

What works for me isn't the prose. The prose is undeniably the best around.

But, what get's me is thinking about my own late father, and how he took me to logging camps when I was a boy.