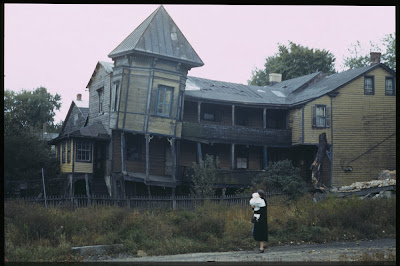 The great man's house. The daughters of the men who cracked his anthracite cracked oysters for him in there. The girls would come home and say they had a place in the great man's house and would rub shoulders with quality, pa. The fathers knew him, though. A werewolf. A vampire. They would sit with their black faces and their watery eyes at the kitchen table and knew what it meant to turn your bairns over to such men. They'd say nothing because there was nothing to say.

They turned their sons over to the collieries. There was pride there, and shame, too. A man hopes for better for his children than he got. Nothing is ever better in a mine. You come out every day like the womb. Born again. Or not. The great man would read of the little men like ants that worked in his seams, dead of the gas or the great hand of gravity. It was a story from far away as their daughters cracked his oysters. But the men would see their sons fight back the plain fear in their eyes as the sky passed away and the rank earth swallowed them for their labors, and feel pride, too. No man is ashamed of his son at his elbow in a mine. He is ashamed of himself, maybe.

What is a man to do? A Welshman might as well be a black ant. He's got the instinct to go down and up in that little hole and can't help himself. He knows no other thing until he knows nothing forevermore. He does what he does. And the great man did what he did. He saw the man's weakness, and strength, and used one to get the other.

Look upon it. The great man had the other great men in his pocket. He could call out the guard on a whim. He could kill a man legal. He could kill him any which way. He could do what he pleased. He could live in the shadow of a boneyard in a palace and there were none dared to squeak. The men said we'll vote and stick together, and the great man just put one more man in charge of them, the new black prince of the county with the thing with the letters behind him. It was organized, but not like you'd think. Things would go on behind a velvet curtain. If they drew it back you'd see the smirk of the hyena in there.

There was no work. The union and the boss alike said no coal. The big machines and the kept men kept even the culm from us. The great man didn't mine the coal, he mined the banks and the government and the union and got his gelt just the same.

The great man thought he knew men. But he did not know your father and his father. They knew the coal like he knew his oysters. They went into the woods where the seams lay close to the sky, and they began again. The very earth gave them what they always sought. The men sent to find them joined them. The trucks ran at night to the great glittering city where the coins slept in great vaults.

The housemaids knew from whence it came, for they had come from there themselves. They pressed the coins into the dingy hands at the alley gate and burned it in their own great man's house. Their little hods filled with bootleg coal made a pyre for our great man.

Look on it.
Posted by SippicanCottage at 9:16 AM

This is fine, man. The "left" is currently using the West Virginia mine disaster of last week as a means of demonizing coal miners, and for the owner/operators and the Goddamned union it's just business as usual.

It's a hell of a life, and 'twas ever thus. God bless miners.

Sippican... where actually IS this house??

Tom- I wrote this a while ago and don't remember the picture's details. If memory serves, it's in Western Pennsylvania.