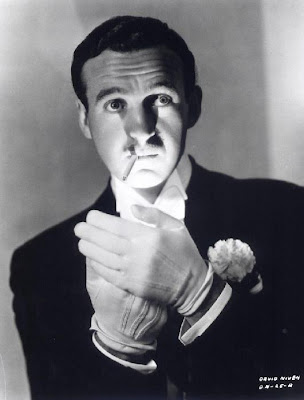 March 1st, 1910 - July 29th 1983. No one in Hollywood will ever have as many engaging stories told about their lives. When you share a house with Errol Flynn and call it Cirrhosis-by-the-Sea, I imagine they'd pile up pretty quick.
Niven quit the movies to re-enlist in the British army and fight in WWII. He thought it was in bad taste to recount stories about the war, but like all raconteurs, people endlessly told stories about him.
More babes than a maternity ward. Let's party with David Niven! Bonus Max Raabe soundtrack.

Posted by SippicanCottage at 9:17 AM

Sigh. I had a crush on David Niven, starting when I was about seven.

Permit me to nominate my favorite David Niven romp---Casino Royale, with the best musical composition Burt Bacharach ever wrote.

If I ever get my own radio talk show, I'm using the rollicking theme music from Casino Royale!

P.S. The link above includes the entire movie, after about three minutes of the opening musical fanfare.

Thank you for this reminder and remebrance of one of the greats of the silver screen and early television.

If you have not already read them, I highly recommend Niven's two volumes of reminisences, "The Moon's A Balloon" and "Bring On The Empty Horses".

Gah! I missed his centennial. And this weekend we watched "A Matter of Life and Death." A commenter on imdb.com said he was one of the most charismatic actors ever. Just to think about him makes me smile. He's (this close to being) on par with William Powell in my book.

His effortless charm was a pleasure to behold.