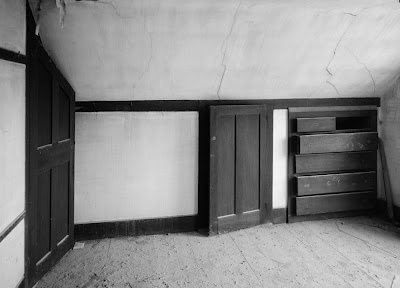 It was a routine job, really.

I've been to a hundred of the movers and shakers' houses at this point. I remember the first time I saw a battered mailbox leaning drunkenly at the end of a dirt driveway, and checked the directions the boss gave me over and over. It looks like nothing. No one could afford to hire us to bang a nail in this place. I pulled in the driveway, figuring I could ask the knackers who lived there where the proper house was if nothing else, and was astonished to follow the dusty lane almost a mile into the pines before I came to the gravel dooryard with the fountain, a real fountain like a postcard, out front. If the owners hadn't provided the drive, Sherman himself would have taken more time getting to that stone and brick confection's doorbell than getting to Savannah. And more fire.

It was all you could do to keep yourself from tugging your forelock when you talked to the owners, if you ever even saw them. There was always some factotum or maid or secretary or housekeeper or general contractor hired to hire the other general contractors minding us. You were kind of in awe of the money, and ashamed of it.

But you got used to it after a while. The dumbest contractors occasionally made the mistake of thinking that because the owner gave them a snifter and chatted about baseball after work once, they were their equals. They'd go home and try to build a house like the magnificent piles they worked on all day for themselves. You always knew it was going to end badly when the boss said: No work today; we'll work on my house instead. If a realtor says: Builder's own home, you can be sure it's not finished and he doesn't live there anymore, and the bank is mowing the lawn.

So you'd walk like a shade through the byzantine halls, looking for the right door out of the hundreds, to fix something that would stay unfixed for a thousand years in a normal person's house. The housekeeper would always talk about the house like everyone should know the compass by internal magnetism, and the owner's haunts by reputation.

No, not that room! The northeast drawing garrett! Not the southeast orchid solarium!

So it was just another long drive down a gravel drive on a Monday. There was enough crushed stone in the private lane through the pines to make Rushmore back into blockheads. You began to wonder if you should have brought an additional bag lunch to eat halfway between the house and the mailbox. Finally, you entered a sort of deer park, and there it was.

It was worse or better than the usual, depending on whether you had to paint it or not. It really should have been a public building of some sort. It was too big to picture people living in it, no doubt resorting to sending condiments parcel post to their family members at the opposite end of the dining table. The mind's eye conjured hired men standing midpoint in the ballroom, using semaphore flags to describe the faint piano notes they heard from one end of the room to the people in the other. I stopped the truck, and took a long look at the place in the early morning light, and let me tell you if it was going to be a public building, it should be a morgue.

Or worse; but what's worse than a morgue? You could let your mind wander over that, but I wouldn't recommend it. I did, and started thinking about waiting in line in a Registry of Motor Vehicles devoted solely to loaded hearses. The place was a snake in the bathtub.


(to be continued, if I feel like it)
Posted by SippicanCottage at 8:15 AM

Email ThisBlogThis!Share to TwitterShare to FacebookShare to Pinterest
Labels: Bits of my life pulled out and flung on the Internet floor, Some enchanted place

Yes, please do.
My landlord’s boss was a Jewish carpenter. Maybe you heard... Anyway, he helped me build our first home. My landlord, I mean. By that I mean, I didn’t think I could do it. He asked me, “Do you know how you build a house? One stud at a time,” he said. I still use that. I learned some things about building a house too. I miss that guy.
Your story seems to be about “The Invisible Rich”. I see their homes around here. But I never see the people.

I hear a noise in the east wing!

please finish and the one about welding too please. please
leon

I can refuse Gerard nothing.

Leon- I have a capricious mind. I'll have to go back to that. Thanks for asking.

In that case, I'm sending the skimpy little mini-dress, the high heels, and a disposable camera.

You write so well. Love the bit about how the snifter leads to delusions of grandeur. And "No one could afford to hire us to bang a nail in this place." and...oh, just go write the rest of it.

Paul Fussell talked about these people in his book "Class" which I remember reading in the early 90's.

He called the the "Rich-out-of-sight."

I think he linked them to the great depression and how that had wiped out the old ostentatious "society" rich. (I rather think WWI and WWII had something to do with it too.