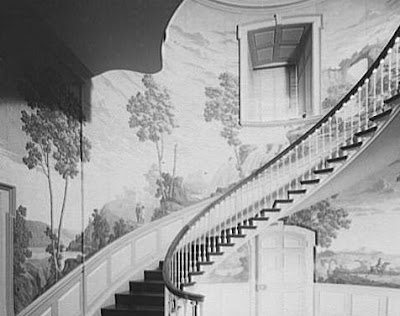 I looked over at Angel, half expecting to see a little puddle form under him. His knuckles were white from gripping the table, his interest in staring at the paper had morphed from grabbing hold of a life preserver to clinging to the last piece of flotsam in the ocean. Pecksniff -- this whole place -- had gotten to him. I had to think quick or I was going to be working here alone for the rest of the week.

I realized right then that I didn't know his name, and was never going to. He wasn't going to offer, and I wasn't going to ask. Lord knows what would happen if I said it three times.

I picked up the papers and grabbed Angel by the arm. With the papers gone, he turned and looked up at me like the flotsam had gotten away from him and a big dorsal fin had arrived.

I gave Angel my best it's-almost-last-call-hurry-up look and pulled on his arm hard enough to hurt him. He ended up beating me out the door somehow. The driveway seemed like quicksand now, and we swam over behind Angel's truck.

There's a certain poise you gain from being summoned endlessly to fix things that are beyond the capacity of others to do for themselves. You can be dressed in rags, little ovals appearing on the worn bottoms of your old boots, unshorn and bedheaded, and people are still a little in awe of you if you can make a toilet flush. Doctors sit atop this totem pole of hidden knowledge, I guess. You sit there, shivering and shirtless, and wait for them to come in and scrawl a few runes on a scrap of paper and save you. They shake your hand and leave and you know they touch a flower in a pot the same way. A lawyer's a little farther down, head filled with arcane tidbits that can pull your chestnuts out of the fire after your check clears. But we thumbsmashers make it way up the pole too. The townsfolk stand around waiting for you to fix things. You're Clint Eastwood with a hammer.

Well, whatever mojo we brought had evaporated entirely, and we were just two schoolboys without our homework again, out in the playground, afraid to go in. Observed dispassionately, Angel and me must look a little absurd together. I'm a six-foot-three Irishman, rangy and pasty-faced to the point of borderline Ichabod Crane, and Angel was little more than five-foot tall, a little heavy, and swarthy. Four-foot-fourteen, I called him. We must have looked like Mutt and Jeff with callouses to Pecksniff, who was no doubt inspecting us from the window.

"There's no way I'm going back in there."

I should point out here that Angel was no bedwetter. If you work shoulder to shoulder with a guy for years, in the trench and the tavern alike, you get to really know a fellow. He never acted silly, but he had a sort of bonhomie and self-assurance that made him a lot of friends and avoided unpleasantness with strangers most of the time. But like many of my friends, Angel was what we termed " a serious man."

I remember some guy in his cups running his mouth at Angel in a barroom one time. The guy was a foot taller than Angel and had a big man on campus athlete look to him. Angel finally told him to shut his pie-hole or he'd shut it for him, and Joe College surprised us all and pulled out a knife. Angel had five friends right there, including me, that would have killed that guy for a nickel, and lent Angel the nickel too, but we reflexively burst out laughing. The only question was where Angel would stick that knife after he took it away from the guy. Somewhere embarrassing, not fatal. Children shouldn't taunt serious men.

Serious man or not, Angel's fight or flee instinct seemed to be missing half its urges, and I started wondering just how silly we'd appear to old Pecksniff if I had to tackle Angel when he headed for the driver's side door.

"A merda do diabo!"he sort of hissed under his breath. "I'm outta here."

(to be continued, if you can stand it)
Posted by SippicanCottage at 9:16 AM

Keep it coming. Although I really don't think you need the encouragement.

Here is more encouragement. Why are you hammering furniture together instead of words (for a living that is)? I read a great deal of "literature" but this stuff is head and shoulders above most of it. Please keep it up. Thanks

A: Because only a man who has intimate familiarity with resistant matter could write this way.